Consider an alternator upgrade for increased efficiency  (published November 2012)
Your engine’s alternator can be considered the battery bank’s primary charging device since you use the boat’s engine regularly—if not daily—and because the alternator is already there and ready to go to work. But most standard, factory-supplied alternators on marine diesels will not have the output capacity to quickly and efficiently charge a large battery bank. With nominal output ratings of 55 to 80 amps, an internal regulator, and functional outputs of 20 amps or less once the alternator is hot and the batteries have started to charge, the standard alternator will have a hard time replacing all of the amp hours of battery capacity most boat owners and cruisers need.

The solution is to upgrade your engine’s alternator with an externally-regulated, high output model or to add a second alternator that can provide the charging amps you need.

ENERGY REQUIREMENTS
The first step when upgrading your alternator is to figure out how many amp hours you need to replace daily so you can size your battery bank to have the required storage capacity. A typical cruising boat with incandescent lights, an electric fridge and a full set of navigation electronics will draw between 100 and 200 amp hours daily in normal use—about 50 more while on an overnight passage. Boats with full home entertainment systems, microwave ovens and computers can draw much more.

The choice of batteries will also determine the rate of charge you will be able to apply, which in turn effects the time it will take to replace the amp hours used. Traditional wet cell batteries have an acceptance rate of about 25 percent of their total capacity. Gel cells will accept 30 percent and AGMs will accept up to 50 percent. So, your new alternator should deliver an output equal to the battery bank’s acceptance rate. In our example, a 300 amp hour gel cell house bank should be charged (at 30% acceptance) by an alternator with a maximum output of 100 amps. If the bank has AGM batteries, the alternator can be rated up to 150 amps.

SMART CHARGING
When you move to a high output alternator, you have the choice of using one that has an internal regulator or opting to go with a unit that requires an external “smart” regulator. The smart way to go is to use an external regulator that is programmed to deliver the exact voltage your batteries require and the amps that will most efficiently charge the battery bank.

Smart chargers operate in three phases along what is known as the ideal charging curve. The charger starts out with a modest amp output as the engine, belts and alternator warm up and then moves directly to the “bulk” phase at maximum volts, which will take the bank to about 75 percent of a full charge. When this level has been reached, the regulator shifts to the “acceptance” phase, which will replace the final 25 percent of battery charge. At that point the regulator reduces the charge level to the “float” phase, during which the batteries are maintained at a full state and any amp draw is compensated for.

Smart chargers will add years to the life of your battery bank and will reduce charging times on a daily basis.

DRIVE BELTS
The size of the alternator you choose for an upgrade will depend on the belt or belts that you can use on your engine. Most standard marine auxiliary engines come with a single 3/8” pulley to drive the standard alternator. But a 3/8” belt can only handle an 80 amp alternator, so if you are planning to upgrade to a 100 or 140 amp unit, you will have to upgrade your belt and pulley system to handle the loads.

The simplest solution is to exchange the 3/8” pulley with a 1/2” pulley that will allow you to upgrade to a 100 amp alternator. But that will be the maximum output you can expect for a single belt drive. Also, in this output range, you will be looking at a small frame alternator that will more than likely fit directly to the mounting attachments on your engine.

To push the output from your new alternator to 120 amps or more, you will need to add a double, 1/2” pulley to the engine. These can be supplied by your engine’s manufacturer or you may be able to use third-party pulleys from West Marine or other retailers.

Drive belts for double pulley systems are manufactured as pairs and should be installed and replaced in pairs instead of one belt at a time.

THE ALTERNATOR’S FOOTPRINT
There are four types of mounting systems used by the alternator industry and one will certainly fit your engine. The question is whether you can get the output you are looking for from an alternator that fits without making modifications. The first step is to determine the mounting profile on your engine.

Once you have determined the output you need from the new alternator, you can look at which models will be the best to work with, either as a replacement for your existing alternator or as an upgrade to a large case high output model.

BE REALISTIC
The output you get from a new alternator will almost always be less than the amps on the case. First of all, an alternator’s rating is measured at 5,000 rpms. If the step up from the engine’s pulley to the alternator is two to one, that rating is achieved when the engine is running at 2500 rpms or a high cruising speed for most modern marine diesels. At anchor, with the engine ticking over at 1200 rpms, you will be starting with an output of about 50 percent of the alternator’s rating.

Energy loss is a fact of life in any electrical generating system. Heat in the alternator’s case is a simple way of checking whether the alternator is working, but is also a sign that energy is being lost. Resistance in the wiring, shunts and switches will also reduce the effective output from an alternator, so it is important to keep wire runs as short as possible and to make sure the cabling is as large as required—usually ought or double ought—and the cable ends and attachments to switches and batteries are clean and secure. 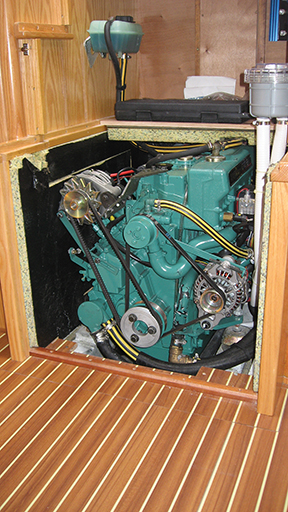 In the end, when you upgrade from a 55 amp to a 120 amp alternator, for example, you will not suddenly be delivering 120 amps to the battery bank. But you will more than double the effective output from the alternator, and thus reduce charging times by half or more. The actual output you get will depend on rpms, battery condition, belt tightness, wiring and ambient temperature.