We picked up our 40 foot charter cat from the Horizon Yacht Charter base in Jolly Harbour, Antigua and, after clearing out, set off on a one way charter from Antigua to the Horizon base in St. Martin. As we were checking out, we ran into some old friends who mentioned that the forecast was for true “augmented trade winds.” In February, that can mean near gale force. But we left anyway.

Our route was to take us to Nevis, St. Kitts, Saba, St. Barts and finally St. Martin.  It was a grand plan and began with a fair downwind crossing to the southern end of Nevis and to the expansive South Friars Bay at the southern end of St. Kitts. This is a good stop for leaving the boat while we explored the island on foot and by taxi because there is a secure dinghy dock. 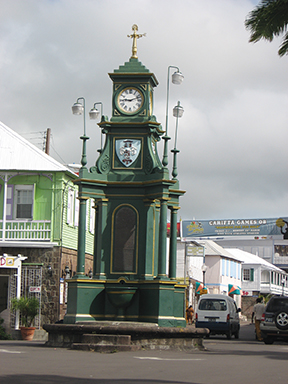 St. Kitts is a green and verdant island that was named St. Christopher by Columbus and later became a thriving sugar cane producer. In the 1700s the main town at Basseterre, named by French settlers, was one of the most bustling and prosperous centers in the infamous Triangle Trade. The town now sports a mix of colorful English and French colonial architecture with “The Circus” at its hub boasting a very English clock tower in the middle of the square.

The great fort and barracks built by the British in Colonial times at Brimstone Hill on the island’s northwest corner is a national historical site and a massive reminder to the century long war between the British and the French to dominate the sugar islands of the Caribbean. From the very top, the views are inspiring. Lush and tall, St. Kitts offers lovely scenery, good hiking, pleasant beaches and a number of decent anchorages. 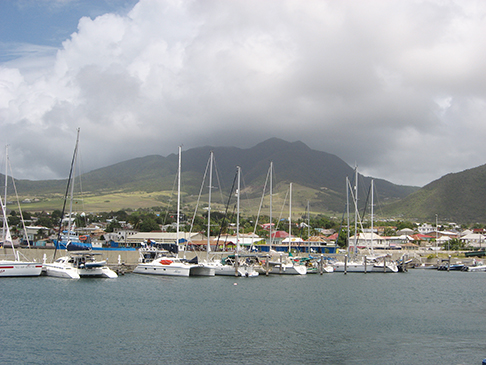 The augmented trades did indeed arrive, which kept us harbor-bound in the marina in Basseterre for the remainder of the charter. We explored St. Kitts from north to south and found it to be a charming, unpretentious island that is somewhat off the beaten track. On your way north or south through the Leeward Islands, it is well worth a visit.