The new Berret-Racoupeau design is a dream to sail—fast, handy, seaworthy and very comfortable  (published January 2018)

From the first day that I saw the drawings and renderings of the new Beneteau Oceanis 51.1, I had been looking forward to taking this fairly radical new design out for a test sail. That opportunity presented itself at the Annapolis Sailboat Show 2017 and we were fortunate to have enough breeze to really put the boat through its paces. 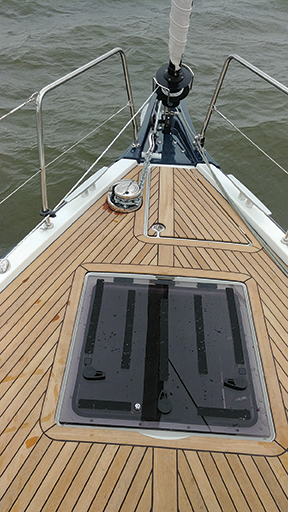 The new 51.1 has some distinctly new features for a Beneteau Oceanis. The hull is a modern pumpkin seed shape that is fairly full in the bow sections and then carries the quite broad beam all the way aft to the transom. The hull has a real chine above the waterline that runs the full length of the boat. This shape increases volume inside the hull in a way that expands living spaces. Plus, it provides increased form stability that allows the boat to transfer sail power into forward speed more efficiently and it encourages the crew to sail the boat more level.

The square transom balances the plumb bow and together with the flat sheerline give the 51.1 a very modern and businesslike appearance. To soften the look of the slab sides a bevel has been added at the gunnels along the full length of the deck.
The underwater profile is very flat and broad which should enable the boat to fly on a broad reach. Because of the great beam aft, the boat has twin high aspect rudders so that the leeward rudder is always biting the water and you never have to worry about a single rudder cavitating when sharply heeling causes the boat to broach.

The cabin top is low and sleek with large windows. It doesn’t cover much of the foredeck so you have loads of space for lounging while at anchor or for stowing a large dinghy while sailing offshore. There is a large locker forward that can be set up as a crew’s cabin with a single berth and it’s own head. This space could also be used for extra sails, fenders and sundry deck gear and lines. The anchor locker is big enough to stow a second anchor and rode. 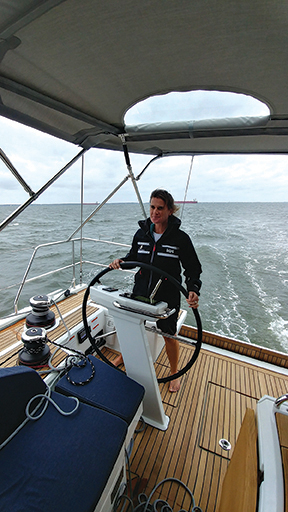 The 51.1 comes with a short composite bowsprit that doubles as a bow roller for the anchor and a secure place forward of the genoa to tack down a reacher, Code 0 or an asymmetrical spinnaker. A short fixed sprit like this will make downwind sailing faster, easier and more fun because you can leave your big sail furled when not in use and available as soon as the angle opens up enough for reaching.

UNDER SAIL
We jumped aboard the 51.1 at Bert Jabin’s yard in Annapolis’ Back Creek and then motored down the creek to the Chesapeake Bay. It was a gray morning with a nip of fall in the air and the probability of rain later. But at least there was breeze.
Under power the boat steered easily as the twin rudders did double duty. The 80-hp. Yanmar had plenty of power so when we gunned it as we left the channel we were able to get the boat over 9 knots and again because of the twin rudders there was no prop wash affecting the helms.

Once out of the channel, we headed into the wind, rolled out the mainsail and genoa. The sheeting arrangement has all lines and sheets run under the decks in conduits so that they emerge at the aft end of the cockpit coamings where they run through line stoppers. There is one large electric winch on both sides that are accessible to the helmsman or any crew. You have to swap out the mainsheet and the jib sheet every time you tack but this is simple with the line stoppers handy.

As we fell off the wind and sheeted for a close reach the 51.1 accelerated noticeably. Underway, we were heeling until we could feel the chine steady the boat and at that moment we also felt the boat’s speed increase. We had about 10 knots of breeze and once trimmed we were sailing at 60 degrees at 7.5 knots. The boat certainly felt slippery.
Out in open water we hardened up and put the boat through a series of tacks. It tacked nimbly and carried its way through the tacks well. Upwind, the 51.1 sailed inside 45 degrees tack to tack. Again, the twin rudders give the helm a positive feel, like driving a sports car.

After a few miles of sailing upwind, we fell off onto a broad reach and eased sheets. The 51.1 maintained her speed and was easy to handle. A fit couple will not have trouble handling this boat, even setting downwind sails from the bowsprit.
One of the boat’s best assets is the cockpit which is not overly huge for a boat with this much beam but well laid out for sailing and lounging at the same time. All sailing is done at the aft end of the cockpit which leaves the forward end open for those who aren’t handling lines. Plus, on either side of the companionway there are two bed-side lounges where you can stretch out under the protection of the dodger. The cockpit table folds out to seat six easily and eight in a pinch. The after end of the cockpit table has a locker large enough for a life raft.

The 51.1 handles easily under power and around the docks and is a very sweet sailing machine that likes to sail on the level and likes to go fast.

LIVING ABOARD
Beneteau has been working with the Nauta Design group for several years and the look, styling and accommodations of the newer boats has been Euro-modern with a yachting twist. The 51.1 takes that and expands upon it. 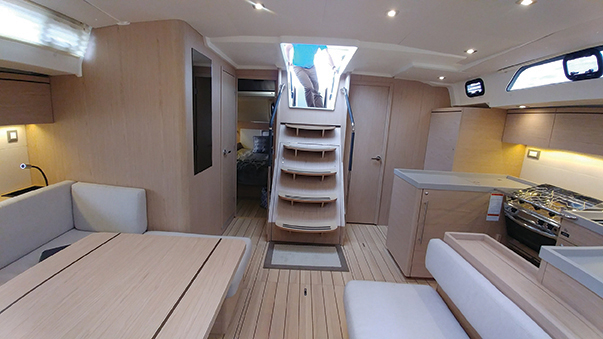 The basic layout has three cabins and either three or two heads. The forward cabin, the master suite, has a centerline double berth that you can walk around. The head compartment is to port and the separate enclosed shower is to starboard.

The two quarter cabins are large and have ample storage. Each can have its own head or the port head can be swapped out for storage compartments and thus the two cabins would share the starboard head. These cabins have a lot of headroom and will be great for guests who come for a week or two of cruising with you.

The saloon has a U-shaped dinette to starboard that will seat four; with the table folded out, three more can sit on a bench to port. The chart table is part of the port bench.

The galley to port has plenty of counter space and storage lockers. A two-burner stove-oven comes standard and there is a single large stainless steel sink. The fridge is a side loader under the counter and the microwave oven lives in a compartment in the counter from which it can rise to counter level when needed.

The boat we sailed was finished with a light colored wood veneer and light gray fabrics. With the large windows in the hulls, the long windows in the cabinsides and the overheard hatches, tons of natural light fills the boat. Beneteau has moved on from teak and holly soles and dark varnished trim below decks. Everything is light, bright and airy.

The 51.1 has plenty of storage for all you will need for extended cruising and acceptable water and fuel capacity. If you were heading far afield a watermaker and a genset would be excellent additions.

The new Oceanis 51.1 is the first of the next generation of Oceanis designs and shows that the company, that has been building boats for over 100 years has not lost its creative and innovative spirit. The new boat will turn heads where ever it is sailed and will take her owners far and wide in comfort and style.