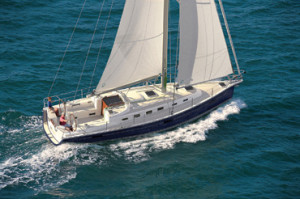 The new Blue Jacket 40 that is scheduled for launch in December is a unique project among American builders and promises to be one of the most interesting new boats to come along in years. Tim Jackett, who was CEO and chief designer of Tartan and C&C Yachts for many years, went out on his own last year after building more than 2,500 boats to his own designs. When Island Packet’s founder, CEO and chief designer Bob Johnson, who has also built about 2,500 yachts, heard that his old friend was setting up his own design shop, he made a phone call that got the ball rolling on a new line of performance cruisers to be built in Island Packet’s facilities in Largo, Florida.

The brief for the new design, called the Blue Jacket 40, was to create a true performance cruiser that would provide exhilarating sailing performance and acquit itself ably around the buoys and in point-to-point events while maintaining a level of cruising comfort that modern sailors, racers and cruisers have come to expect. No small task.

The result is a stylish, modern, fin keel, spade rudder sloop that benefits from the vast design and building experience of two of America’s premier yacht designers and builders. The hull has sleek lines with a fairly plumb bow, a nicely squared off transom and just a hint of a curve in the sheerline. The hull carries maximum beam fairly far aft so the cockpit and after cabins are as spacious as possible. 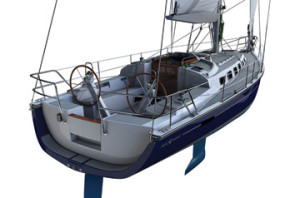 The numbers tell the tale of the Blue Jacket 40’s performance pedigree. The standard design with the deep keel has a sail area-to-displacement ratio of 21.8, which means the rig has plenty of horsepower. The displacement-to-length ratio of 172 puts the boat in the “moderately light” category and indicates that the design will be quick but should also have a pleasant motion going through and over waves. The ballast-to-displacement ratio of 39 percent indicates that the 40 will stand up nicely to the breeze and should easily convert pressure into boat speed.

The 40 has a double headsail or Solent rig with the self-tacking jib on a carbon fiber Hoyt Jib Boom. Forward of the jib, a reacher is fitted with the tack mounted on the small prod or sprit that has been built off the bow. For upwind sailing, the self-tacking jib will provide very close sheeting angles and effortless tacking. The reacher will be deployed when off the wind for maximum sail area and performance. Both sails are on Harken roller furling units and can be handled from the cockpit. The full battened mainsail is handled with a double-ended sheet from either side of the cockpit and furls neatly into a carbon fiber pocket-style boom.

The Blue Jacket 40 is being built by the craftsmen who build Island Packets, so we can expect to find very high quality and integrity in the boat. The hull and deck are vinylester-infused moldings with Divinycell foam cores. The hull is reinforced with a laminated grid and an interior molded unit stiffens the hull and anchors the bulkheads, tanks and chainplates. You will find a belt and suspenders approach throughout.

The new Blue Jacket 40 is a uniquely American sailing yacht that evokes the best in this country’s boat building traditions, and was drawn and is being built by two friends who between them have built more than 5,000 high quality, innovative, ocean sailing yachts. Look for a full review of the Blue Jacket 40 early in the New Year. For more information, contact Blue Jacket Yachts at 727-535-6431 or visit www.bluejacketyachts.com