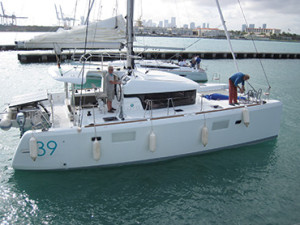 The New Lagoons Arrive – The new 52 and 39 are the trend setters for the future of the Lagoon fleet.

On the Tuesday following this winter’s Strictly Sail Miami boat show, the two Lagoons that debuted at the show were cut loose from the docks so we could get a chance to sail the innovative new designs from the world’s leading builder of cruising cats.

Despite the ongoing recession in new boat sales worldwide, Lagoon—like its sister companies in Groupe Beneteau—has made a commitment to introducing new models that steadily advance the way we think about catamaran cruising. Renowned French multihull designers VPLP have designed the new boats so the hulls, which are roomy, have good fast shapes that allow them to sail well.

NEW THOUGHTS ABOUT CATS
Probably the biggest change in the new Lagoons is the rigs. You can see in the photographs that VPLP has moved the mast well aft instead of placing it right on top of the forward main bulkhead. By reducing the mainsail in size and increasing the size of the genoa, the designers have made the boats easier to sail with the same or better performance.

To give the new designs a unique look that enhances the brand, a look that is both familiar and thoroughly new, Lagoon turned to famed French designer Patrick le Quement who made his name in automobile styling and is on the board of The Sustainable Design School.

The look le Quement delivered is certainly all Lagoon, but with a modernist twist. The three signature elements of the new design are, first, the integral cockpit hardtop that flows seamlessly into the line of the cabin top. Second are the plumb bows that give the new boats a jaunty, purposeful look while extending the waterlines for added speed. And, third, is the distinctive bevel that has been built into the bows and hull deck connection; this detail reduces the height of the hulls and smooths out the look from the side.

Because of the change to the rig and to make sure the boats are as safe as possible, Lagoon had to come up with a way to support the mast on top of the bridgedeck instead of at the forward bulkhead. The solution was to create a massive structural grid in the bridgedeck with a large fiberglass girder running from the aft to the forward main bulkheads that is in turn secured to the hulls on both sides with lateral stringers.

Reports from the crew that sailed the 52 across the Atlantic from France to Miami are that they have never sailed a stiffer catamaran, even in big ocean waves.

SAILING THE 39
We picked up the 39 in Miami’s Government Cut and motorsailed out into the open ocean where we hoisted the small main and rolled out the genoa. The wind had been piping all morning but by the time we got out there it had moderated to 15 knots and the lumpy seas were calming down. It was one of those perfect Miami days with warm sun, a good breeze and puffy trade wind clouds. And, to the west, the loom of possible thunderstorms gathered over the Everglades.

The 39’s raised steering station on the starboard side of the cockpit has a comfortable double seat and offers good visibility forward. All sheets and control lines are led to the helm through clutches and are trimmed using an electric winch. With this set up, the 39 is very easy for one person to sail. That’s what we did. While the crew ate lunch, we hoisted the mainsail, rolled out the genoa and took off for a lovely sail along Miami Beach.

The 39 sails upwind best at about 50 degrees off the true wind and makes a slight touch of leeway when close hauled. But, it likes to sail quickly so we were seeing steady sevens on the GPS as we rode easily through the swells and chop. Throwing the cat through a few tacks, we confirmed that 50 degrees is indeed the right angle upwind and that she will tack sensibly through 100 degrees. I was able to tack her myself as the jib was self tacking. On our way back toward the cut and Miami Beach Marina, we eased sheets and felt the 39 really pick up speed yet she was incredibly easy for a single person to manage. We brought her into the marina and easily docked her using the twin engines. You can just about make a cruising cat crab sideways up to a dock or spin in its own length while maneuvering in tight quarters. The 39 was no exception. 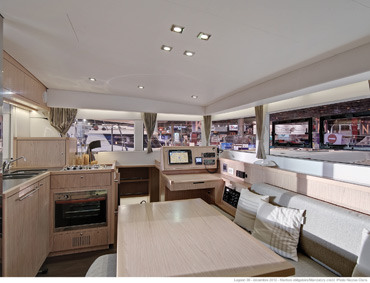 The new 39 was designed to fit into the Lagoon line between the 380 and 4000S2. Almost 700 380s have been built, making it one of the most popular cruising cats in the world. The 39, with the company’s new design thinking and its position in a sweet spot in the market, should become as popular as the previous model.

The 39 has four layout options. The two cabin owner’s version can be built as either the standard model or upgraded to a very well equipped Premium version. You can have the boat built with three sleeping cabins for families with children. Or, if you sail with lots of friends or want to put the boat into charter you can have a four cabin version.

The 39 is a very comfortable boat and offers a lot of amenities for its size. There is an outside table in the cockpit that will seat six and a table in the saloon that will also seat six. The galley to port faces aft and has a large opening window so those preparing meals can still chat with those in the cockpit and drinks and plates can be passed back and forth with ease. The nav station is also to port and faces sideways; visibility from here is excellent so this will be a good place for standing night watches. The boat is finished with a light colored, attractive Alpi wood veneer, white ceilings and molding and light colored fabrics. With the huge windows in the saloon and large square windows in the cabins, the 39 is filled with natural light and effuses warmth and hominess. A couple or a family of three or four could very happily cruise the Lagoon 39 for days and weeks on end. 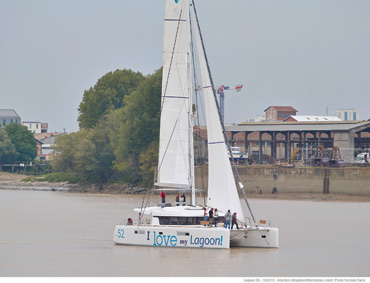 FLYING THE 52
The sun was getting a bit low when we got the Lagoon 52 away from the marina docks and headed out the cut toward the open sea. Compared to the 39, the 52 felt vast yet was similar to the little sister in many ways. The bigger boat has the same rig with the mast placed quite far aft and the headsail set up to be self tacking. Still, the mainsail was large and required serious effort from the electric winch to get it hoisted and quite a lot of thumb pressure on t