Our boat appeared to hover over the sand, the water was that clear. Our first night, the cockpit light illuminated the water below as if we were looking into an aquarium. I stepped inside the cabin for a minute and Rick saw the silhouette of a startled sea turtle swim into the light and scoot away at high speed. 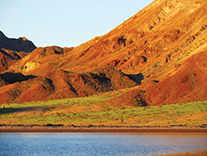 Caleta Pulpito is a treasure on the eastern side of Isla Angel de la Guarda, in the northern part of Mexico’s Sea of Cortez. Located near the Baja Peninsula, this uninhabited island is also a biological reserve. The anchorage itself backs up to a hidden lagoon filled with egrets and herons. Beyond is a valley, patches of green grass and red stone, crowned with jagged mountains. It is as remote as can be, and never crowded. Our friend John from Time Piece joked about getting goats and settling down here.

The Sea of Cortez is a study of contrasts and Caleta Pulpito is no exception. Ashore, chaparral and cacti are prolific and hearty gnarled trees are scattered among them. It is a desert place, harsh and dry. But after rains, a few leafy plants emerge and grasses sprout. And all around is the magnificent sea, blue and turquoise. Under our boat, the water was warm yet refreshing, a welcome refuge from the sweltering mid-day heat.

Rick and John disappeared for hours nearly every day; their pole spears in hand, always returning with dinner and wide grins. On our third morning, I convinced the two water fanatics to instead go for a walk ashore. They indulged me, but were soon drowsy from the heat and settled comfortably on a grassy mountainside patch. I let them be and continued chasing monarch butterflies and scaling crumbling hills, camera in hand. In my delight at the greenery surrounding me, I sniffed the heady scent of nearly every plant I came across. After our walk in the scorching heat, we cavorted in waist-deep water where coarse rock and large patches of fine sand fight for space. 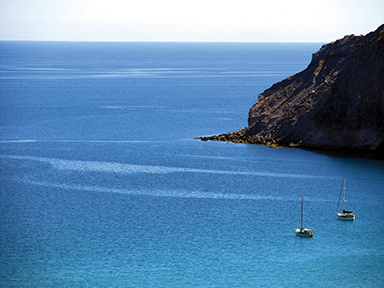 Our last day there, I went snorkeling at a nearby point teeming with reef fish. I made my way through the reefs, alternating between chasing fish and hiding behind boulders to watch them, unseen. But someone was watching me. Out from under a rock, she appeared. A turtle, the size of a car tire, swam past me, unhurried. I held my breath and tried to tame my excitement at her nearness. Not wanting to startle her, I matched her pace as she casually swam 20 feet from me. When she paused, I paused. There was no one else nearby, only hundreds of reef fish, a turtle, and me. Eventually, she ventured deeper, her shape becoming ghost-like while gradually disappearing. I smiled in my mask.

View all posts by Kyra Crouzat