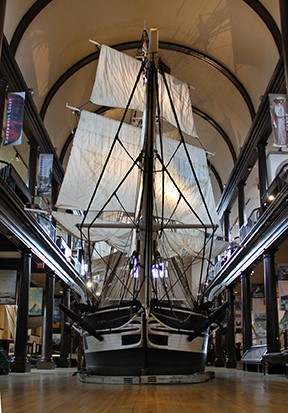 The story of the world’s largest ship model and her “brick berth” involves a businessman’s fortune, a fabled ship, a determined daughter and philanthropist, and a labor of love. Lagoda, a half-scale model of a 19th century whaleship, sails into her second century this year as the New Bedford Whaling Museum’s signature exhibit and a unique learning tool.  Ensconced within the equally impressive Jonathan Bourne Whaling Museum building (Bourne Building), the world’s largest ship model and its story are no less remarkable today than in 1916 when the Lagoda was dedicated. The New Bedford Whaling Museum is marking the 100th anniversary all year with lectures, tours, presentations and family programming, supported by the National Park Service: Maritime Heritage Program, and Kenneth T. and Mildred S. Gammons Charitable Foundation. On Saturday, August 6 the Museum hosts the Lagoda Centennial Gala, supported by BayCoast Bank and Bristol County Savings Bank.

The original whaling vessel Lagoda, purchased by Jonathan Bourne of New Bedford in 1841, was one of the most profitable whaleships in Bourne’s fleet.  In 1916 Jonathan’s daughter Emily Bourne (1835-1922) donated funds to build the Jonathan Bourne Whaling Museum building on Johnny Cake Hill, as well as the half-scale model of the Lagoda, in memory of her father.  The unprecedented building project was under the able supervision of Edgar B. Hammond (1853-1937). A prominent local architect, builder and five-term commodore of the New Bedford Yacht Club, Hammond threw himself into the project, researching every aspect of the work.  At 89 feet long, it was at the time and remains today, the largest ship model in the world. The Lagoda and the Bourne Building form the heart of the New 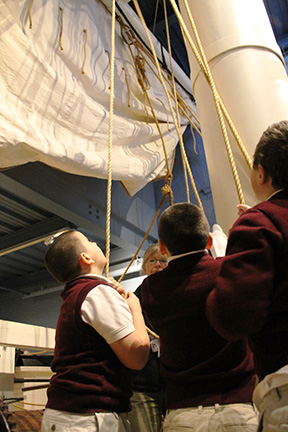 Even after a century of life, the Lagoda never fails to inspire awe upon entering the space. The model is the largest interactive exhibit of its kind in the region, and arguably the first in a museum in the United States. Over the past 100 years, it has become a rite of passage for millions of children to grasp the wheel and steer, as whaleship helmsmen did in the 19th century. Countless feet have walked her decks, so many that the wood wore thin and had to be replaced. She withstood near disaster in the 1970s when a third of the city block was devastated by a gas explosion. The explosion drove shards of glass into her canvas sails, damage that was revealed when these were replaced in 2010 as part of a restoration project, undertaken in anticipation of the 100th anniversary. Thanks in part to major grants from the National Park Service, the Massachusetts Cultural Facilities Fund, and many generous donations through the ‘Navigating the World’ capital campaign, the Lagoda and the Bourne building are secure for another generation.  The New Bedford Whaling Museum invites everyone to celebrate the exhibit’s second century of service by attending events and programs befitting the grand old ship.