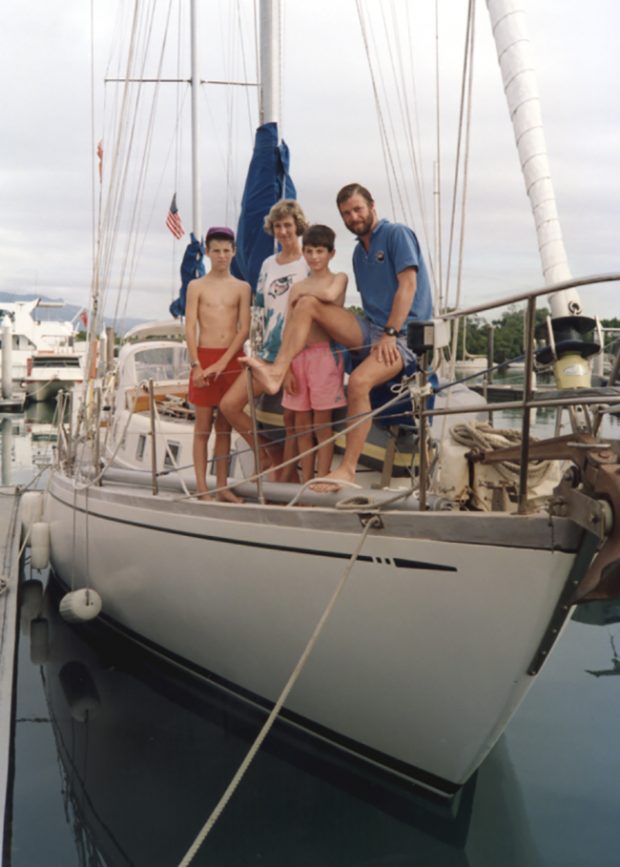 One of my favorite memories from our five year circumnavigation with our two boys Si and Tim happened one evening as we were running under a full moon down the Moroccan coast on our way to the Canary Islands in the eastern Atlantic Ocean. Rosie and I had turned in after handing over the watch duties to the boys for the nine to midnight shift. They were 15 and 12 but seasoned watch standers at that point. As we lay side by side in our aft cabin double bunk, we heard Si say, “Hey, it’s a calm night, let’s put the chute up.” Then we heard bare feet all over the boat and the clank of safety harness clips moving up and down the jacklines. We heard the spinnaker sock being hoisted, the sound of the pole being clipped onto the mast and banging on the bow pulpit. There was a swoosh as the sock was hoisted, a distinct snap as the big spinnaker filled and then Clover leaned over and we could feel her accelerate under her new press of sail. The boys had hardly spoken through the whole process. We drifted off to sleep in the happy knowledge that, if nothing else, we had raised a couple of really handy crew.  And when I got up just before midnight to take over the watch, the chute was down, the genoa was poled out on the spinnaker pole and we’d slept right through it.