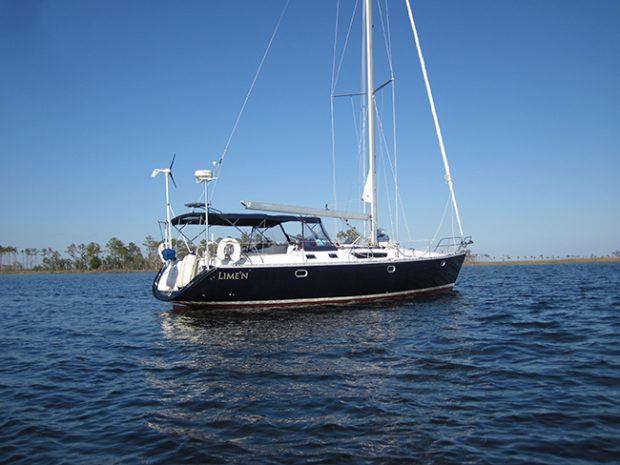 In anticipation of having our Jeanneau 45.2 Lime’n in the Caribbean for the winter, where we would have steady trade winds, we took the plunge and added a wind generator to augment the solar panels. It wasn’t an easy decision since neither of us like the look of a wind generator on a pole at the transom but adding one just made sense. We chose a Southwest Windpower unit and installed it ourselves. Right from the start, even before we got to the Caribbean, the unit was deemed too noisy so we changed the blades to stiffer aftermarket blades; that helped.  Still, we found that in the Caribbean, we spent most of our time in the cockpit and had to shut down the unit to have any semblance of peace and quiet. Also, friends told us that they could hear our generator all night if they were anchored to leeward of us. Umm.
The topic of being self-sufficient on our boats is always a routine part of conversations with fellow cruisers and solar panels, high-output alternators, gensets and windmills were all part of the picture. In general, most did not like the noise of a neighbors’ genset or windmill running all night in an anchorage and most preferred their solar panels over these other two sources of electricity. In the end, our unit died and we simply removed it instead of repairing it.
In defense of wind generators, we found that lots of sailors were generally happy with their wind generators and that  the smaller Rutland multi-blade units or the D400 units were considered much quieter than most and would generate enough power to be worthwhile.  What’s your experience with wind generators aboard your boat, or aboard the boats anchored next to you? Send your thoughts and experiences to: george@bwsailing.com