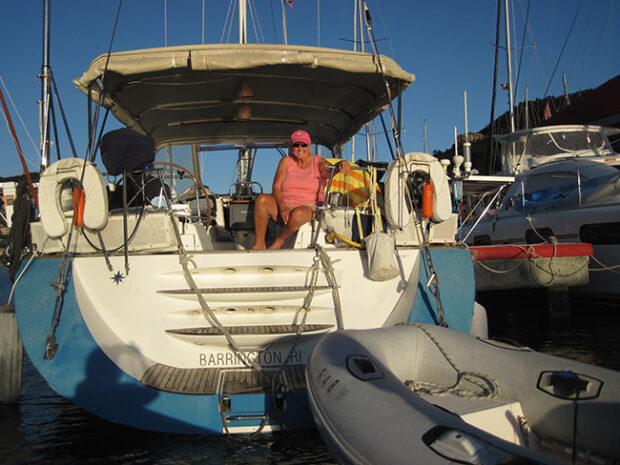 Last weekend we were saddened to receive a call from Hank George, President of the Board of Directors for the Salty Dawg Sailing Association, that Linda Knowles had passed away on Saturday morning from a heart attack. Linda was a co-founder of the SDSA with her husband Bill Knowles and was still active on the board as its vice president. Long time live-aboards and active cruisers, Bill and Linda spent their retirement years aboard their Jeanneau 54 Sapphire sailing from the East Coast to the BVI every fall and then back to their home in Bristol, RI each spring. After they founded the Salty Dawg Fall and Spring Rallies, they would sail in company with as many as 100 other boats on these offshore passages. They had a mooring in Soper’s Hole, Tortola, and spent their winters with many local friends around them. The rallies and the SDSA are very much a product of Linda’s passion for the cruising life and her dedication to the essential values that most cruisers share. She and Bill mentored many skippers who were setting out on their first blue water passages and encouraged new sailors to crew for experienced captains to gain offshore experience. The rallies were always designed to be inexpensive, informal and fun. But they also were intended to educate sailors in seamanship, safety, communications and more through annual seminars in Annapolis and Hampton, VA where the fall rallies start. One novel element of each SDSA rally is the absence of a formal starting line and starting time. In the spirit of self-reliance embraced by veteran offshore cruising skippers, ralliers are provided with in-depth weather forecasts from Chris Parker and then each skipper makes his or her own determination on when to depart. Linda’s smiling face, quick laugh and sharp brain will be missed by many hundreds of sailors who knew her and sailed in the rallies she and Bill founded. She was a dear friend and we offer Bill our condolences and best wishes. Fair winds, Linda.