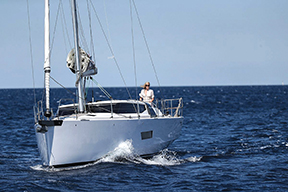 It was a lovely, light air morning on the Chesapeake Bay the day after last fall’s Annapolis sailboat show when we got a chance to give the new Elan GT5 a test sail. We’d had our eyes on the boat all through the boat show and had spent some time climbing around aboard inspecting the new Rob Humphries design. With its pronounced chines in the after sections, plumb bow, broad, folding transom, stylish cabintop and big rig, the GT5 looked unique, innovative and fast. In fact, it looked a lot like a Class 40 that has been tricked out with cruising accommodations.

We jumped aboard from a chase boat and soon had the big mainsail and 110 percent genoa set and drawing nicely. All of the lines on board lead aft through under-deck conduits to the two helms so sail handling takes place at the after end of the cockpit. This leaves the forward half of the cockpit uncluttered and reserved for the recliners and idlers in the crew. Sheets and lines are all managed by single winches port and starboard – these were electric on the boat we sailed – and two rows of line stoppers. 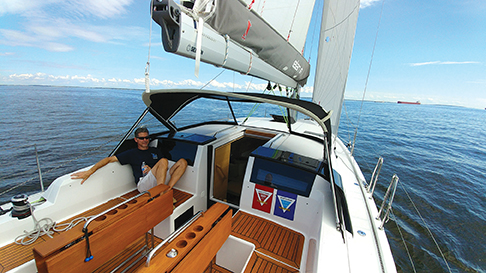 The GT5 is a moderately light design with a T-bulb keel and twin rudders. In the eight knots of true breeze that morning, we were able to sail at close to 40 degrees to the wind and at six knots close hauled. The boat’s design pedigree traces its roots to offshore racing boats designed for short handed crews and the way it sailed proved that breeding does matter.

We eased sheets and reached out into the bay at speeds that approached the wind speed. Had we had a code 0 to fly from the short carbon bow sprit I am sure that could have got close to the wind speed. As it was, the boat was a pleasure to sail and noticeably fast.

The chines on many modern cruising boats are less a part of the performance picture and more to do with styling and adding interior space in the after cabins. In the Elan line of E boats, the chines are designed to work as proper chines; as the GT5 heeled over to about 12 degrees, the chine met the water and immediately added buoyancy and thus stability. This translates into increased sail power and better boat speed. Plus, by stopping the boat’s heel it allows you to sail more upright and thus more efficiently and more comfortably. With its long waterline and performance foils under the water, the GT5 is imbued with natural speed so even in cruising mode you will find that you will make very quick daily runs or fast offshore passages.

As we headed back to the harbor, we jibed our way downwind and pined a bit for a big downwind asymmetrical spinnaker. It was a perfect day for a spinnaker and I am sure we would have seen some good speeds on a broad reach. In the end, we furled the sails and motored back to the marina. The GT5 was fitted out with a retractable bow thruster, so maneuvering into the slip was child’s play. 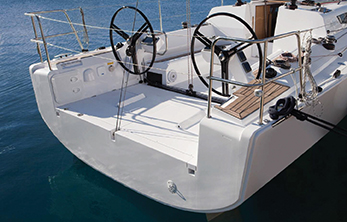 The cockpit is huge and very comfortable. It is set up with two folding tables that can be opened up to seat up to eight for a meal. Or a couple can use just one side. The starboard table also can fold down to expand the settee’s width and with a cushion in place forms a wide sunning pad. The stern folds down mechanically to create a 10-foot wide swimming platform that has the stainless steel swim ladder built in and easily accessible from the water. The helm seats are storage lockers but you have the option of transforming one into an outdoor fridge and the other into a gas fired barbeque.
The cockpit has ample storage for a boat with two after cabins and you will find more storage under the cockpit sole that is accessible through the floor hatch or from the stern with the swim platform folded down. There are good hand holds and places to brace your feet while underway so even in bouncy weather you will be secure. The boat we sailed had a modern racing-style dodger that gave the crew plenty of protection at the forward end of the cockpit. 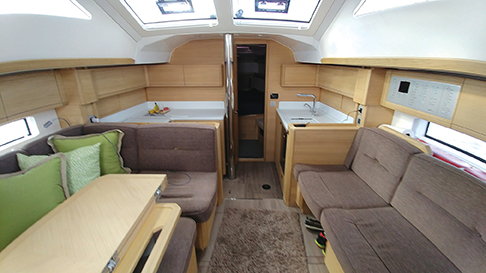 The concept behind creating a Gran Tourismo (grand touring) cruising yacht was to provide a thoroughly modern and luxurious performance cruiser, which is based on the GT cars that once were so popular in Europe – think of the Aston Martin DB5 that James Bond drove. The GT5 certainly has the sailing qualities that you’d expect, but it also has an interior that makes for a very fine cruising home.

The boat has four interior options so you can mix and match heads and cabins to suit your needs. The boat we sailed had a three cabin layout and a single aft head. The master cabin forward has a centerline double and a lot of storage and hanging space.

The two quarter cabins have good headroom, plenty of storage and good ventilation with ports that open on three sides. The after port hole opens into the cockpit so you can get good cross ventilation; also, being able to talk to an off watch crew from the cockpit makes a lot of sense when sailing offshore at night.

The saloon has the galley forward and that stretches the full 12-foot, 10 inch beam. There is ample counter space and storage. The sink is quite far outboard to starboard so it may not drain all that well when heeled over on port tack. Still this is a remarkably large galley on a 40-foot boat. Under the port counter, a microwave oven is mounted on a mechanical lift so it can rise to the occasion or not as needed. The L-shaped dinette to port has two stools that nest under the table when not in use. Altogether, you can sit six comfortably for a meal.

The chart table to starboard is large enough to lay out charts and guide books and has good areas for mounting radios, a satphone, a second chartplotter and other instruments. The electrical panel is modern and very complete so you can run all systems from one place and can monitor batteries and tanks easily. 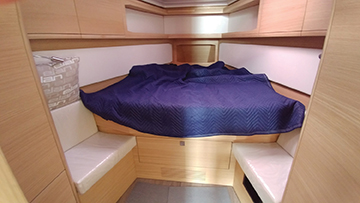 The boat we sailed had a bright, oak themed interior finish, a white overhead and a darkly stained cabin sole. The cushions were a warm brown color. The net effect was of a light and airy interior with large hatches and windows that also had a traditional yacht like feel. The two large hatches on the forward end of the raised cabin top provide light and plenty of ventilation.

BWS THOUGHTS
For those of us who like the modern purposeful lines of this generation’s offshore shorthanded racing boats – Open 60s, Class 40s and so forth – the new Elan GT5 will be a most interesting new design. The plumb bow, bow sprit and flat stern match up nicely and the slightly angled sheer line gives the boat a yachtie look. The hull carries its beam well aft where the chines provide additional stability and power. The raised cabin is unusual but it gives the GT5 a unique appearance.

The interior is pleasant, commodious and very finely finished. This is a yacht that will make you proud as you settle down with friends for a sundowner or a meal. But it is the boat’s sailing qualities – like the driving qualities of a GT automobile – that will put a smile on your face and encourage you to sail more and sail better. 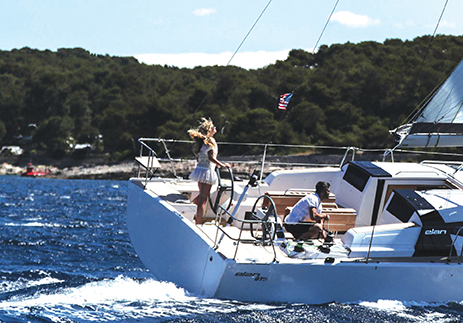