Ever since reading Canadian author Farley Mowat’s books about Newfoundland’s southwest coast, it has been our dream to sail there. A couple of summers ago, the dream came true when my husband and I departed the Chesapeake Bay and headed north on our Morgan 38, Mary T. After a few fogbound weeks in Maine, we arrived at Port aux Basques in the southwest corner of Newfoundland. We were not disappointed.

The south coast of Newfoundland is dotted with remote outports only accessible by boat. Anchoring in these small villages is often impossible due to the depths and hard bottoms. Tying up to a wharf is usually the best option and rafting up to other boats is a common practice.

One of the places where we could anchor was a stunning fjord called Hare Bay. Apart from one log cabin, it appeared to be uninhabited. Not being a painter, it is difficult to convey the majesty of this place. Sailing up an alley of water with sheer cliffs on each side adorned with waterfalls took our breath away. The slanting rays of the sun splashing upon the cliffs revealed a great range of textures and hues.

Five miles up the fjord, we dropped the hook at Sandy Point (47˚42’56” N, 56˚33’47” W), where we were surprised to find another boat at anchor. A red, Cape Island-style fishing boat that had been converted into a pleasure craft provided a colorful contrast to the backdrop of rock and pine trees. We jumped into our dinghy to explore further inland and came upon a luscious waterfall set in pink stone, so we scrambled up the rocks to dip our toes in the water.

Departing Hare Bay the next day, fog was draped around the cliff tops like a gauzy shawl constantly rearranging itself. At moments, it was so thick we couldn’t see the wall of rock 80 feet off the starboard beam. Fortunately, during our month in Newfoundland the foggy days were less numerous than the clear ones. 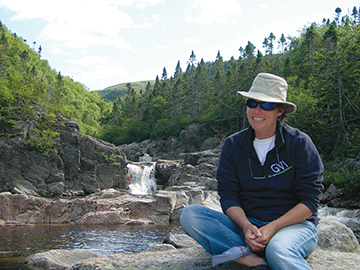 We saw few cruisers during our voyage. Most other boats on the water were local fishermen. This isn’t always the case, as cruising clubs have been known to visit the region in flotillas of up to 75 boats, but I can’t imagine so many vessels fitting into some of the spots we visited.

The long declining fish population has led to a dwindling human population, as fishing was a primary source of income. The tiny outports are disappearing as the government withdraws services and people are forced to relocate. There are already many ghost towns perched along Newfoundland’s southern coast.

Our trip was curtailed due to an approaching hurricane, which compelled us to run westward. Feeling shortchanged, we intend to return and continue exploring the numerous fjords and outports where a few shy but generous Newfoundlanders still dwell.

View all posts by Amy Flannery