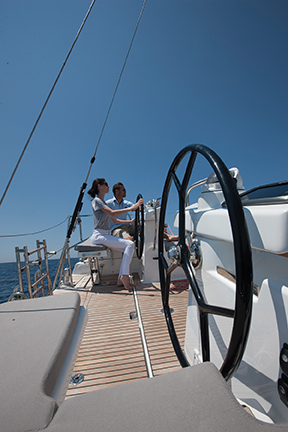 SAIL TRIAL
The morning BWS took the 54 out for a sail on the Chesapeake Bay was fair, warm and a fine 10-knot breeze was blowing from the south. So often we find only zephyrs on the bay so a bit of breeze was welcome.

The 54 handles easily around the docks. With the bow thruster engaged and the big folding prop inching us forward we peeled away from the floating dock and then slipped by other moored boats with only inches to spare. The twin Jaffa wheels and steering systems give you a  firm and instant feel for the rudder and allow you to maneuver in tight spaces.
Once clear of the docks and mooring field we motored out the channel into the bay. The 75-hp. turbo charged Yanmar has plenty of torque to drive the 54 at her hull speed of 9.6 knots in flat water. At full revs, the engine was noticeable in the cockpit but not loud while down below, the sound insulation in the engine compartment kept the noise to a conversational level.  At cruising revs of 2,200 rpms, the boat slipped along at seven and a half knots and the engine was virtually silent.

We hardened up to close hauled and trimmed the sails to see just how balanced she was. With about 15 knots of apparent wind the 54 sailed at 30 degrees and made a happy 7.7 knots. Plus, the helms were light and the whole boat in fine balance.  We threw her through a few tacks to see how she handled and came away impressed with both the ease of tacking the big boat and her ability to tack in under 90 degrees true wind  angle.  With the 100 percent self  tacking jib, we would probably be sailing five degrees closer to the wind but about a knot slower. 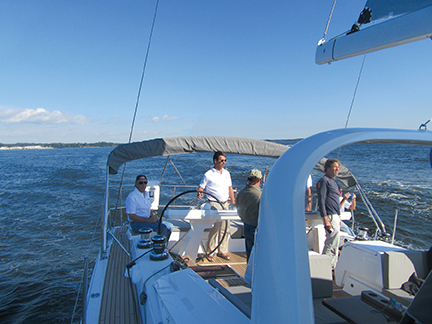 The 54’s cockpit is huge. With us that day were the boat’s new owners and a couple of representatives from Jeanneau and the dealership.  But this crowd did not get in the way of sailing the boat at all. The main seating area is forward while the sail controls and winches are aft and next to the helms. The boat can be handled quite easily by two people, while the rest of the party can relax and enjoy the ride.

LIVING ABOARD
In 54 feet, there is enough interior volume to really permit the designers to go to town. Jeanneau and Briand worked with the famous interior designer Andrew Winch—super yachts are his normal thing—to give the new 54 and the Jeanneau Yacht line maximum comfort and elegance. 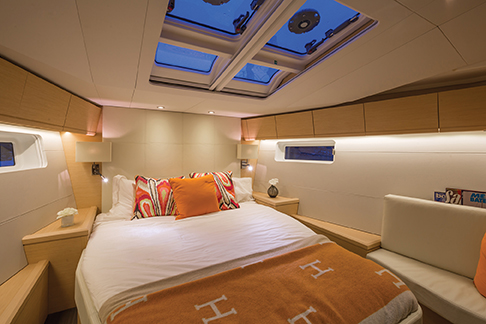 In the five cabin version, a small Pullman cabin is wedged into the space that had been devoted to the after port head.  So, if you wanted to, you could take this version of the 54 off cruising with 10 aboard each of whom has his or her own bunk.

The Yacht series of Jeanneaus—54, 57 and 64—are real high quality cruising boats with passagemaking capability. The 54, for example, has a fuel capacity of 127 gallons and a water capacity of 255 gallons when the optional extra tanks have been added. The galley is equipped with a large fridge and feezer and a second freezer could be added under a settee. There is room aboard to install a genset, the optional huge battery bank and a water maker. The large lockers aft in the cockpit and forward in the bow provide ample storage for extra sails, a spare  dinghy, SCUBA equipment and more.