Often there is little to no wind on the October days following the Annapolis sailboat show when I test sail new boats for these reviews. But on Tuesday, we had breeze. With Jeanneau’s Catherine Gaudier and Paul Fenn aboard, we hoisted the mainsail of the new Jeanneau Sun Odyssey 380 as we motored out Back Creek, rolled out the 110% genoa and trimmed for close hauled. In the lee of the land the wind was soft but within a couple of minutes we caught a puff of 15 knots and the 380 put her shoulder down and accelerated. 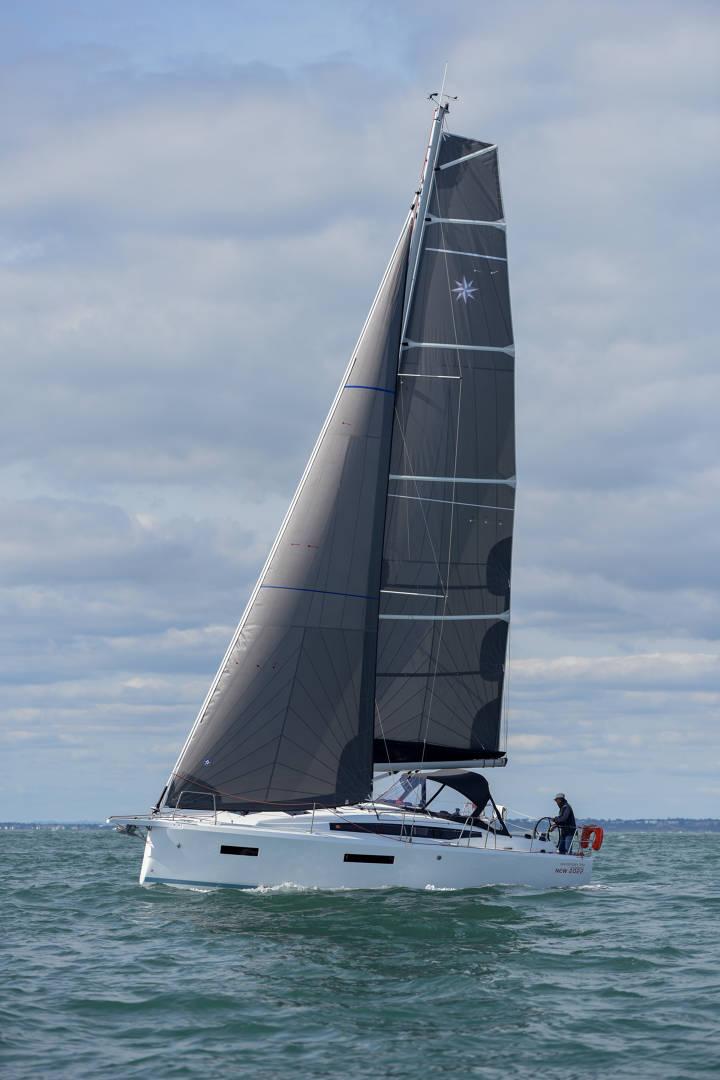 With the full-length chines just above the waterline, the 380 heeled to about 15 degrees and then stayed there. No putting the rail down, no water on deck, no drama.

The main is trimmed with a double ended mainsheet, known as the German sheeting system, plus a vang, so you have complete control of the boom without the need for a traveler. The genoa sheets pass through circular thimbles that float above the cabin top and are controlled with a trim lines that lead to the cockpit. This allows you to open and close the slot in infinite variations without the need for genoa tracks. Both sheeting systems are simple, foolproof and easy to use.

In the puffy breeze flowing down the Servern River by the U.S. Naval Academy, we put the 380 through a series of tacks and were impressed with the performance. In an average of 12 knots true, the 380 sailed at 32 degrees apparent wind and made 6.5 to 7 knots.

We eased sheets and broad reached toward the Chesapeake Bay. In the puffs of 15 knots and more apparent wind, the 380 often hit 8.5 knots and occasionally neared 9. With twin rudders set quite far apart, the helm was light but positive; she sailed like a sports car, quick, sure footed and fun. Even a novice helmsman could control the boat in normal conditions and an autopilot will be able to steer effortlessly. 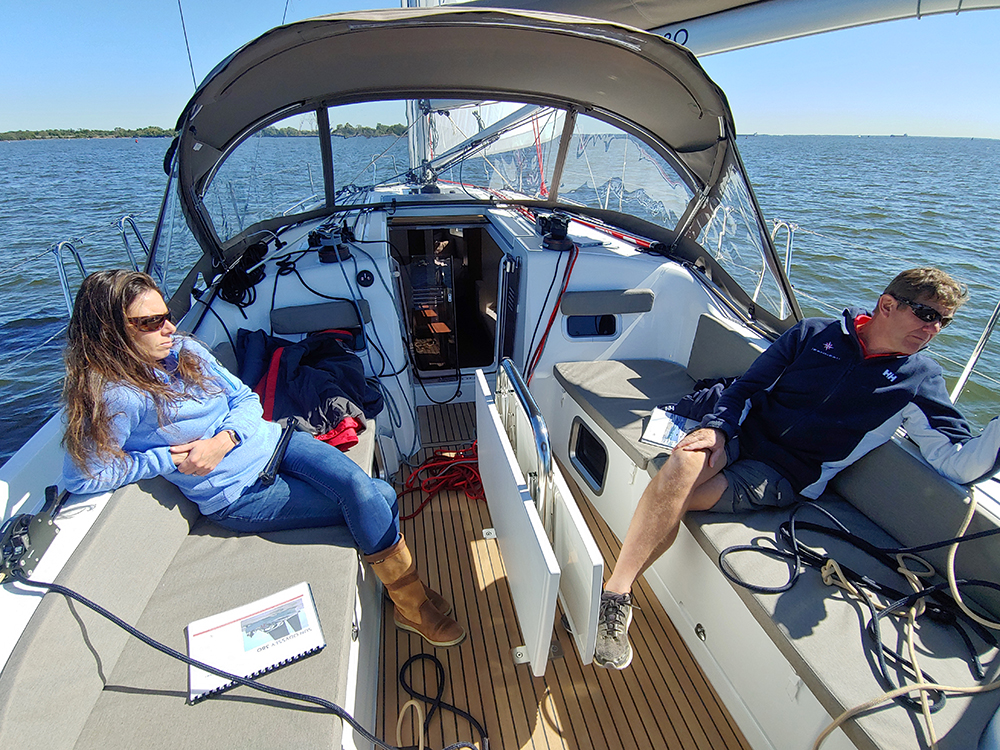 The 380’s beam means that the cockpit can be as large as you would find on a 35 footer or earlier vintage. The transom folds down to make a wide swim platform. The boat we were on had the optional stainless steel davits that pivot sideways to be out of the way when not in use.

The twin wheels are mounted on waist-high binnacles that have flat areas where the instruments and chart plotter can be mounted. The wheels are set far enough apart that you have great visibility forward.

The 380 has the Jeanneau walk-around side decks that had us all shaking our heads when they were introduced a few years ago. You no longer have to vault over the coaming to get to the side decks, you simply walk around the helms and there you are.

The cockpit is roomy and comfortable and has ample storage in the large cockpit lockers and the under-the-sole lazarettes. 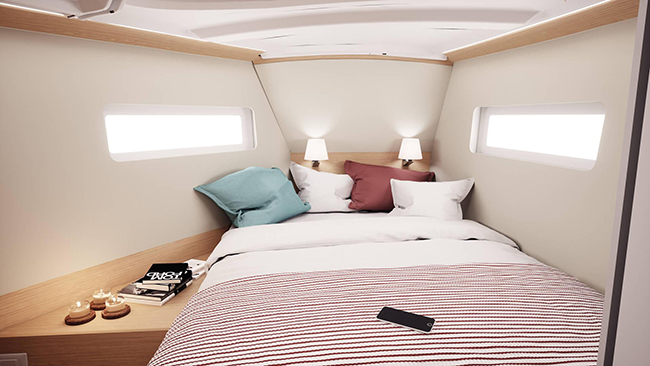 The four accommodation plans for the 380 offer either two-cabins one head, two-cabins and two heads, three cabins and one head or three cabins and two heads. The boat we were on had the latter. In the three-cabin version, there are two quarter cabins tucked under the cockpit. In the two-cabin version, the port cabin space becomes a giant cockpit locker. I have to say that the interior spaces are remarkable large and comfortable for a boat of only 38 feet. 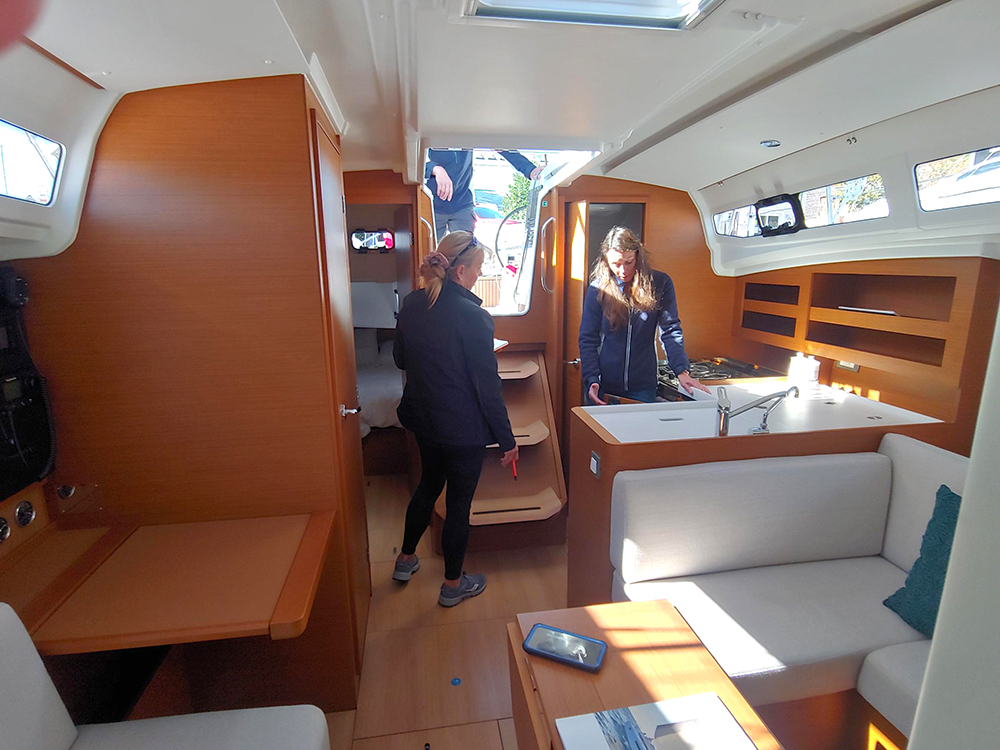 The saloon layout has a centerline table with bench settees on both side. Our boat had the optional double leaf table that will seat six. The nav table and electrical panels are to starboard and the L-shaped galley is to port. The galley has double sinks on the centerline that will drain on both tacks and an extra-large top loading fridge. There is plenty of storage both above and below the counter plus an isolated compartment for trash.

The finish work of the new generation of Sun Odyssey’s continues to be modern, attractive and serviceable. Our boat has the optional fabric coverings on the main bulkheads and in the forward cabin. This adds lightness and a touch of elegance to the spaces. Jeanneau offers a number of options for the style and look of the cabin so you can have a new boat that is built just for you. 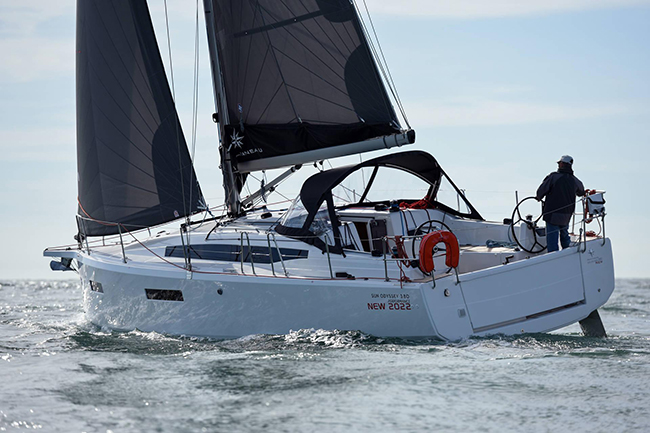 A couple or a family of four will be quite comfortable living boat the SO 380 for extended cruises. Such comfort combined with the boat’s great sailing performance will make it an amazing platform for building family memories.