Picture this; you are in a tiny boat, as in just over 21 feet tiny, it’s light, fast, carries a massive amount of sail area and has absolutely no amenities below deck and you are to sail it across the Bay of Biscay just as the winter gales are approaching, out into the Atlantic and all the way to Guadeloupe in the Caribbean. Daunting, terrifying, yet thrilling enough to make it one of the greatest sailing races of the last few decades. 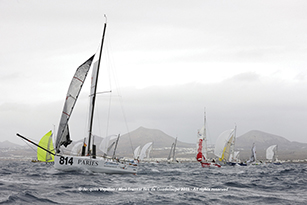 This most recent Mini-Transat started from the tiny town of Douarnenez located in Brittany in the northwest region of France. The race started on September 19 with the first leg a 1,250 nautical mile sprint from France to Lanzarote in the Canary Islands. The race attracted 72 entries, most of them from France, but also from 14 other countries. Surprisingly, well maybe not so surprisingly, there was not a single American entry. In recent years there have been some Americans in the race including double Olympic medalist Jonathan McKee who was well on his way to winning the 2003 race when he was dismasted not far from the finish. In 2001 Gale Browning of Annapolis was the only American to finish the race. Sadly in early December Gale lost her battle with cancer after a brave struggle.

The Mini Transat was started in 1977 by an eccentric British sailor by the name of Bob Salmon. He lamented the escalating cost of offshore ocean racing and created what he called, “an affordable and achievable offshore race.” The first Mini-Transat started in England and finished in Antigua with a stop in Tenerife in the Canary Islands and Salmon himself was a competitor along with 23 other entries. From that rather humble beginning the event has grown. 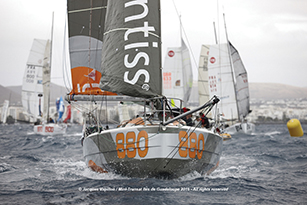 After four editions Salmon handed things over to French sailor Jean-Luc Garnier and once under French control the race really started to take off as the top French sailors entered with an eye toward making a name for themselves. The first edition under the leadership of Garnier was won by none other than French sailing legend Yves Parlier. Indeed, Parlier was only the first in a string of top sailors who have won the event. Two time Vendee Globe winner Michel Desjoyeaux won in 1991,Thierry Dubois won in 1993 and Yvan Bourgnon won in 1995. Two other notable sailors that never won but have left their mark on sailing are Ellen MacArthur, now Dame Ellen after her numerous sailing accomplishments, and Mark Turner who is head of OC Sport, the company that manages the Extreme Sailing Series and who created and managed Dongfeng Race Team in the last Volvo Ocean Race. 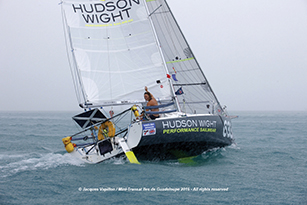 For the 2015 edition there were two classes; Production boats and Prototypes with most of the sailors competing in the Production boat class. When the gun fired for the start of the 20th edition of the race there was a stiff northeasterly wind blowing that stirred up rough seas. The first night was a tough one for the 68 men and four women taking part. The eventual winner of the Production boat class Ian Lipinski sailing Entreprise Innovante had the right approach from the outset.

“One thing is for sure,” he said, “if some of the competitors start the race in top gear, I won’t take the risk to follow and suffer breakage.”

Lipinski knew that the way to win was to minimize breakdowns and it paid off. He won the first leg to the Canaries by seven hours over Tanguy Le Turquais  sailing Terreal. Once across the Bay of Biscay the fleet eased into more tradewind like conditions allowing most of the boats to make it to Lanzarote without too much damage. 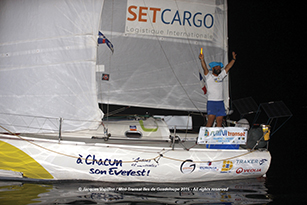 The second leg started Sunday, November 1 and would take the boats 2,770 miles from the Canaries to the Caribbean for a total course distance of just over 4,000 miles. Nine boats had already dropped out. Tactically it’s a tricky leg as the skippers all had to decide how much extra distance to sail in order to stay in decent breeze, or if they could ‘cut the corner’, save some miles and not run out of wind. That region of the Atlantic is dominated by a massive area of high pressure, which typically means less wind as you get closer to the center of the high. With this in mind most of the fleet left Lanzarote and dropped straight south in order to get under the high and they were all close to the Cape Verde islands before they peeled right and headed for the Caribbean. The dive south added around 350 extra miles, but kept them in the breeze. 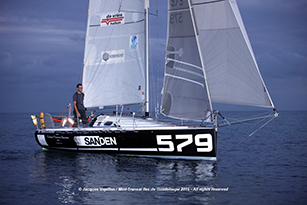 For the first week Ian Lipinski led the Production boat class with a chasing pack consisting of Julien Pulvé who would win the second leg, and Tanguy Le Turquais who would come second overall.  In the Prototype class Denis Frédéric aboard Nautipark held a commanding lead of 40 miles just a couple of days into the second leg. He would go on to win the leg and be the overall winner of the Prototype class. Indeed in the overall standings he was almost a full day ahead overall of his closest competitor Luke Berry.

While the sailors are pretty much on their own to sail across the Atlantic the race organizers do provide support boats to help those who sustain damage along the way. With such a big fleet to manage it makes sense. In this most recent race 52 sailors were rookies to the event. Twenty were returning competitors and the average age was 33. There were two 22 year olds competing (Julien Hereu and Quentin Vlamynck) and the oldest competitor was Carlos Lizancos at 56. Luckily no boat suffered any serious damage even though the support boats were diverted to help some competitors. 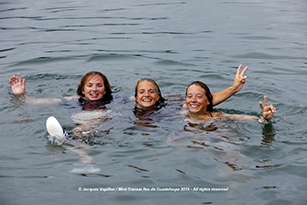 The leaders enjoyed steady trade winds as they crossed the Atlantic but as they closed in on Pointe-A-Pitre in Guadeloupe the winds started to change. Ian Lipinski was still out front but his nemesis Julien Pulvé was not far behind. As they got closer to land, both sailors had their own ideas of what to do and Pulvé went south while Lipinski stayed north. It turned out for Lipinski that not covering his closest competitor was a big mistake. Just three hours before finishing he was knocked down by a sudden squall and by the time he recovered Pulvé was ahead and went on to win the leg. 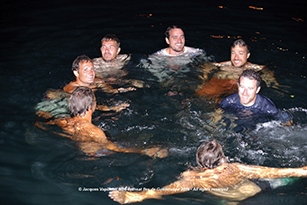 It’s clear that the challenge of pushing a small, highly strung boat across an ocean and making it safely is part of the allure of competing in the Mini-Transat. Most competitors admitted to being terrified, most lost weight and most vowed that despite the difficulties and the nights of wet misery that they would be back in two years for another go. Of the 72 starters there were 56 who crossed the finish line in Guadeloupe. 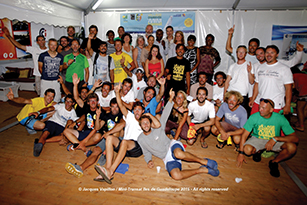 Brian Hancock is a sailmaker, author, lecturer and veteran offshore sailor and racer. He lives in Marblehead, Mass.