Sometimes the best anchorages are unexpected ones. The weather had been perfect for our cruise in Desolation Sound, British Columbia, and my husband Seth and I were looking forward to a few more days there. But as we listened to the VHF while readying the dinghy for our day’s adventure, we learned of an approaching low. Its strong southeast winds would kick up a steep chop in the Strait of Georgia, right when we’d be heading south. We couldn’t wait until after the low had passed because we had to be back at our academic jobs. So I put away the dinghy anchor and hauled up the yacht’s anchor instead. If we made a fast overnight passage, we’d make the tides into the Gulf Islands off southern Vancouver Island. Then we could hole up until the low blew out but still be close enough to our boatyard to reach it in time. We didn’t much care where we holed up, as we were hugely disappointed to be leaving Desolation Sound early.

So it was in a gloomy state of mind—not helped by the fatigue of night watches spent banging into an unexpectedly early sou’easter and keeping track of our GPS-less navigation—that we sailed into Montague Harbour on Galiano Island. Seth and I had debated between several bays and decided on this one not because of any interest we had in Galiano, but simply because it looked well protected and big enough to accommodate the many boats that would also be seeking shelter.

Very soon, however, we discovered that Montague Harbour had a definite cheerful charm. There were plenty of other boats, but we had no difficulty finding good holding in mud and 20 feet of water, a comfort considering the forecast gale. When we rowed ashore, there was a government dock where we could leave the tender for free for most of the day. From there Seth and I strolled up to an information board that told us, to our delight, of a nearby provincial park. 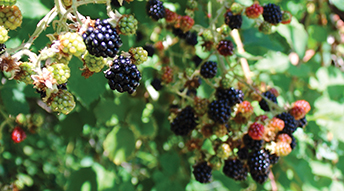 A surfeit of juicy blackberries along the road held me up so long that I’d never have reached it if Seth hadn’t been determined to stretch his legs. The park’s trail skirted the northern peninsula of the harbor and crossed a spit of sand where immense driftwood had piled up. The trail wound through arbutus trees with their curly red bark and offered lovely views of the bay. It was low tide, so we spent just as much time on the beach looking for purple starfish as we did wandering among the salal bushes and red cedars.

Back at the dock, we stopped in the Sea Blush Cafe for the cruiser’s staple food: ice cream.  The sun poked through the clouds and we sat on the porch chatting with the people next to us and surveying the anchored boats, swinging with the gusts that were surely gale-force outside the bay.  We’d completely forgotten our disappointment in leaving Desolation Sound and were already enjoying this new, beautiful and unexpected harbor.