It was a beautiful autumn morning when I met up with the new owners of the Moody 54 that had been in the just finished Annapolis Sailboat Show. The sky was bright blue and the breeze was blowing at 8 knots or so out of the west. As we waited for Alan Baines, the boat’s U.S. dealer, I had a good look through the boat. 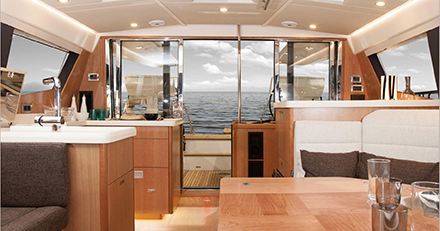 As most readers will know, Moody was a premium English brand that built sensible, ocean sailing cruising boats for owners who expected both traditional style and quality. The brand was bought by the Hanse Group several years ago and went through a serious transformation. The Moodys of today are seriously modern, Euro-style cruising boats that press the design envelope in both pure naval architecture and interior design. 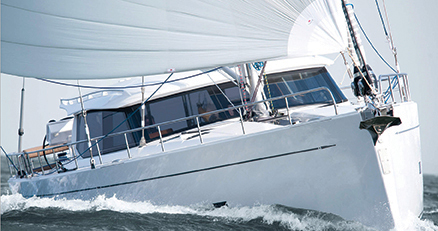 The new Moody Deck Saloon 54 is a Bill Dixon design. Dixon has spent most of his time in the last decade or two designing large, luxury, custom sailing yachts so it is no coincidence that when he once again turned his hand to a production cruiser, the result would have a lot of yacht style and yacht innovations. The 54 has all of that and more. 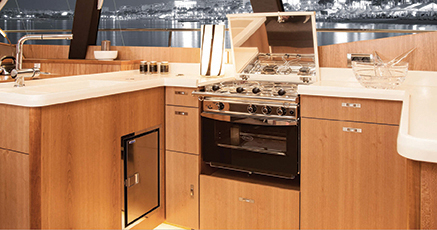 A true deck-saloon cruiser, the raised main saloon has the large galley just inside the sliding cockpit doors to starboard and the U-shaped dinette to port. The wrap-around windows offer a fine view while seated in the dinette or standing in the galley. Forward of the galley on the starboard side there is a nav station with great visibility forward so you can operate the boat from inside under power.
Going forward and down four steps, you find the master cabin in the bow and two quarter cabins tucked in under the raised saloon floor. The master cabin has a centerline double berth and plenty of storage. There are two heads forward and these are shared with the two guest cabins. On the boat we sailed, the port guest cabin had an athwartships double berth while the starboard cabin had a standard fore and aft double. 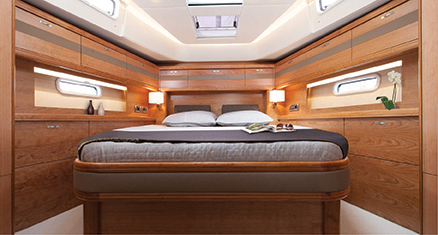 Variations on this basic theme show the galley down from the saloon and in the space where the starboard cabin was on our boat. The area in the saloon where the galley was is now open and can be modified with another settee and cabinets to provide a large social area. Also, if you want to have twin singles in the port guest cabin, that is an option. The layout we sailed was perfect for a couple who like to have another couple or two join them while cruising.

There is a fourth sleeping cabin in the boat that is tucked under the port side of the cockpit. This has twin singles and its own head and is accessible via a staircase that is just inside the sliding cockpit doors and across from the galley. This would be an excellent crew cabin as it is separate from the forward sleeping cabins, close to the galley, and has easy access in and out without disturbing the owners forward.

The huge engine room is under the raised saloon floor and accessible through a floor hatch. It is not often you see such a huge engine room in a 54 foot boat but the Moody 54 is more of a yacht than a boat and has many amenities of a proper yacht…like a true engine room. There is plenty of space for the large Volvo, so you can work on both sides of it easily. Plus, there is room for a genset, air conditioners, inverter, batteries, a watermaker and a large hot water tank. Being right over the boat’s center of gravity, this engine room keeps as much weight as possible in the middle of the boat.
The living spaces below decks are all of good size and there is excellent headroom throughout. The joinery is solid and finely finished. You can see that the designers in Dixon’s office and at Moody/Hanse in Germany have thought through every detail and innovated to get a very pleasing result. 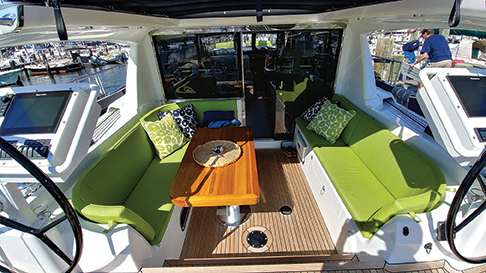 The cockpit on most cruising boats is where those on board spend most of their time so the more comfortable and secure you can make it the better. Dixon and Moody decided to go with a lounging cockpit that is down a step from the twin helms and all of the lines, line stoppers and winches that you need to sail the boat. This way those sailing are not tangling the loungers in genoa and mainsail sheets.
The lounge has a U-shaped cockpit hardtop that provides shade and protection from light rain. In its center there is a retractable shade or soft top that can be folded away in good weather and closed in bad. The tail ends of the hardtop extend aft to the helms on both sides and it would seem that rain would flow directly on to the helmsman but we did not have a chance to test that. One of the downsides of the large hardtop is the restriction of visibility forward for people under about six-foot, two inches. 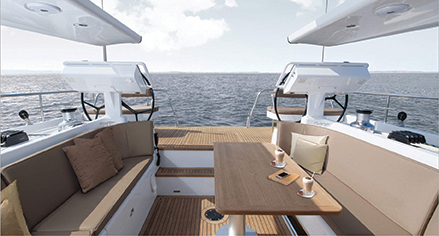 The boat is easy for a single watch stander to manage with the autopilot steering. All lines lead aft and with electric winches and line stoppers, you can trim, furl and reef the working sails from one spot. And because the headsails are on electric furling systems, you can deploy the self-tacking Solent jib when going upwind and then furl it and deploy the big genoa when reaching or sailing downwind.
Moving fore and aft along the side decks is a completely new experience. The boat has bulwarks and get to be quite high as you get to the foredeck. All you do when leaving the cockpit is walk around the back of the helms and you are on the side deck; no climbing over cockpit seat backs or ducking under a dodger or Bimini. Only the new Jeanneau 440 and 490 have anything like this. You feel completely secure everywhere on deck since the top lifeline is a solid stainless steel hand rail that you can grip for balance or lean against. 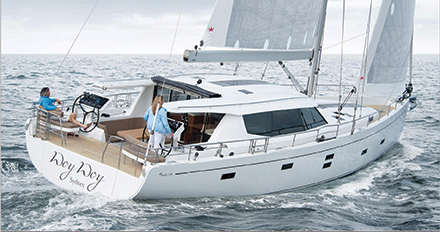 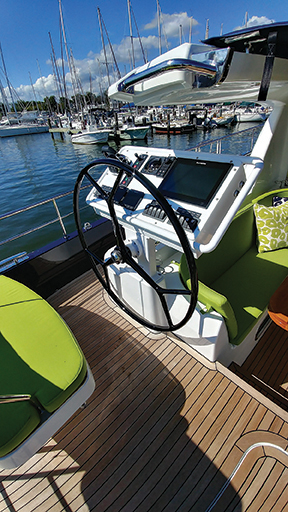 The transom folds down to make a huge swim or boarding platform. The open space beneath the cockpit is large enough to stow an inflatable dinghy when going to sea.
Again, the designers at Dixon’s office and the Moody/Hanse engineers have come up with very creative solutions and have delivered a cockpit and deck layout that is tailormade for safe, dry, comfortable family cruising.

SAILING SIMPLIFIED
Alan arrived and we were soon underway with the boat’s new owner at the helm. The wind was holding us onto the dock, but with the bow and stern thrusters engaged, we peeled away and motored down Back Creek to the Severn River mouth and the Chesapeake Bay. It was a perfect day for sailing so we were all looking forward to putting the 54 through its paces.

In the middle of the channel we headed into the wind and rolled out the mainsail, trimmed for close reaching and then fell off and headed out into the bay. The self-tacking jib rolled out easily and soon we were sailing upwind with the engine off and making six knots into the eight to 10 knots of wind. Very pleasant. Once out into the open water we put the 54 through a series of tacks which involved only turning the helm and sailing through the wind to the new tack as the jib lead slides across the boat on the foredeck traveler.

The 54 had a L-shaped bulb keel and a fairly high aspect spade rudder. Hard on the wind, it sailed at about 42 degrees to the true wind and tacked in just over 80 degrees. This is quite close winded for a big cruising boat but with the self-tacking jib it is possible to sheet to quite close angles. The feel on the helm in this light breeze was very light and the boat turned smartly and carried good speed through the tacks.

With the double-headed Solent rig, we were able to make the big sail change right from the helm. We rolled up the self-tacking Solent and then fell off the breeze and rolled out the big genoa for some power reaching. The big sail took hold of the wind and soon we were sailing at over 7.5 knots in roughly 10 knots of true wind. The 54 has a long waterline and an easily driven hull, so she was able to make the most of what breeze we had.

To say the that the 54 is a pleasure to sail is an understatement. She has great balance and poise and will certainly carry her crew in great comfort in a wide range of wind speeds and conditions. This is a boat that you could easily sail around the world and I’d be quite happy to give it a try.