Gino Morrelli of Huntington Beach, California, is partnered with Pete Melvin in the design and engineering firm Morrelli & Melvin. Together with their staff, Morrelli & Melvin have long led the way in multihull design. The team is deeply involved with the upcoming America’s Cup as consulting designers to Team New Zealand. Last year, they made Olympic history when their 17-foot Nacra racing cat was selected as the new multihull class for the 2016 Olympics. And recently, they saw their 500th cruising cat built by Robertson & Caine for the Moorings, Sunsail and Leopard brands. Not to mention all of the work they do on the powerboat side of the street. BWS caught up with Gino in early November. 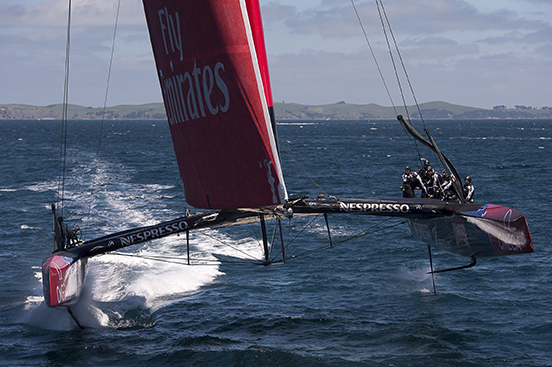 BWS: What is your involvement with the next America’s Cup?
GM: We have been involved with the America’s Cup since 1988 when New Zealander Michael Faye challenged for the Cup with his big monohull. Dennis Conner was defending the Cup and called us in to help design the 60-foot catamaran Stars & Stripes. It was an ultra-light cat that had a wing spar and easily beat the lumbering Kiwi boat.

Then in 2009, when Team Oracle was facing a rogue challenge from Alinghi, we were asked to help the Oracle guys refine their big trimaran. In the end we helped them modify the floats, rudders and daggerboards to maximize boat speed. The trimaran could sail at four times the wind speed.

After Team Oracle retained the Cup in 2009, they began exploring the idea of defending the next round of challengers in a multihull. They asked us to come up with several scenarios and were initially interested in trimarans with soft sail rigs. When Oracle decided to look into cats with wing spars, we were tasked once again with studying design concepts, which ended up with a decision to go with a large cat with a wing spar.

To make this the new class for the America’s Cup, Oracle and its challengers had to develop rules that would provide new design parameters. We were asked to provide the technical input for the new rules while the syndicate’s lawyers hammered out deals. One of our jobs was to find the loopholes in the new rules that could be exploited so we could close them as much as possible. We kept asking ourselves, What would Juan K think? (Designer Juan Kouyoumdjian is a master of finding fast loopholes in class rules that make his boats hard to beat.)

Once the new rules were in place, we were hired by Team New Zealand as design consultants for the Emirites Team New Zealand Cup challenge. We will have a two-boat program and the second boat is under construction. The first boat has been sailing since last summer and has proven to be a good first generation design.

BWS: We have been amazed by the video of the Kiwi cat sailing with both hulls out of the water riding only on its daggerboards and rudders. Did you expect the new 72-footer to actually fly?
GM: As we were working on the class rules, we anticipated that these boats would fly on foils and had to decide how radical we wanted the boats to be. For a while, there was a move toward no restrictions on foils, control wands, sensors or anything under the water that would help achieve maximum performance. But, the Italians worried that this would escalate costs and make the first generation boats uneven in performance, which would reduce the thrill of racing. So, we dialed back by prohibiting wands and sensors, which will make the boats more competitive. Now that we have been working with the Kiwis, we have found a way to get the big cat to rise up on its daggerboards and fly above the water.

BWS: And you are about to tell us all how you made that happen, right?
GM: Well, I suggest you study the photos and videos and come up with the answer on your own.

BWS: Now that Oracle and challenger Luna Rossa have made the shift to multihulls for the America’s Cup, do you expect multihulls to dominate the event going forward?
GM: That will depend on how the event goes. If the boats stay upright and they have close, thrilling races, then this could be the way it goes. But if San Francisco Bay ends up covered with shattered bits of carbon and mylar and the racing isn’t close, then we could see the Cup set back to the 19th Century.

BWS: In September, Team Oracle flipped their new 72-foot cat during a practice session, destroying their wing sail in the process. This is getting expensive, isn’t it?
GM: For some of the teams who want to sail for the America’s Cup, that kind of accident would be game over. 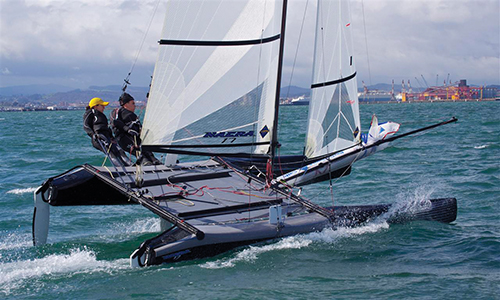 BWS: Moving to the Olympics, you designed the new Nacra F17 that was selected to be the multihull class in the 2016 Olympics. How did that come about?
GM: We have been designing racing cats for Nacra for 20 years and have a long and good working relationship. We designed the F16, F18 and F20 for Nacra and were working on the design of the F16 when the IOC announced it would be adding a cat to the Olympics. The 16 was supposed to be an entry-level racing cat that would lead sailors to the very successful F18 and F20.

At first, Nacra was cool on the idea of an Olympic class, since these classes are often small and full of professional sailors. But Nacra has had a lot of success with the curved daggerboards on the F20, so they decided late in the day to enter a 17-foot version to the competition. We took the work we were doing on the F16, adapted it to the new requirements and came up with a really good boat that fit the IOC’s requirements better than the other entries.

BWS: With the Olympics featuring a cat again and the America’s Cup being raced in cats, do you see a new trend in multihull popularity?
GM: Yes, I think so. There are now real pathways for kids in sailing to move up through multihull classes and one day sail at the highest levels. Boats like the Nacra 16 and A-cats offer great doublehanded or singlehanded competition and will help get young people excited about sailing as they develop their skills. Then they can move up to boats like the F18 and F20 that have very competitive classes around the world. This can only lead to more people getting into multihulls. And at the regatta level, this summer we had a multihull class in the San Francisco Big Boat Series for the first time. We had a Formula 40, an SL 33 and a Sig 45. It was a fun regatta and the cats had some great racing. And, it looks like we are going to have a good multihull fleet for the 2013 Transpac.

BWS: You are well known for your performance multihulls, but you and your partner have also designed some very successful cruising boats. Where has that taken you?
GM: First of all, it took me to South Africa for the better part of a year. For the last eight years we have been working with Robertson & Caine to develop new designs for the Moorings, Sunsail and Leopard brands. So far they have built about 500 new boats to our designs. We have done four sailing cats from 38 to 46 feet and four power cats from 37 to 47 feet.

With MarineMax coming into the charter business and a lot of our old friends from TUI working with them, we are now doing new designs for them, too. They have already commissioned 10 power cats for the BVI base, with more to come.

BWS: How has the custom multihull business been for you in the past few years?
GM: We have a steady business designing custom high-end cats for sailors who want the living space that cats offer combined with high performance. We spent 10 years designing semi-custom cats for Gunboats with 18 launched over that period. We now have our own M&M 65 that can be built on a semi-custom basis.

BWS: Chris White and then Gunboat made the forward cockpit popular. What is the trend today?
GM: Forward cockpits are very much a matter of personal choice. Some sailors love them and some prefer the wheel and all sheets and control lines aft behind the house. There is a funny evolution to the forward cockpit. In the R&C 44, we put a lounging cockpit forward with the helm aft and people really like it. It provides another place to sit so you can have different groups collecting in different places. In mid-size and larger cruising cats, this forward cockpit makes a lot of sense and expands the cruising comforts of the boats. Also, with a door in the front of the cabin, ventilation is improved.

BWS: What do you see as the most important trend in multihull design going forward?
GM: On the racing side, the work we are doing on foils in the AC boats is going to have an impact on racing cats across the board and should increase boat speeds and excitement for everyone. On the cruising side, performance cruising cats and the proliferation of cats in the charter fleets are expanding people’s horizons and have really changed the way sailors think about cruising boats. Monohulls aren’t going to go away, but cruising cats are certainly gaining market share every year.

Learn more about Morrelli & Melvin’s designs at www.morrellimelvin.com, and get the latest America’s Cup news and events at www.americascup.com.