Part One: An American and two Russians get their boat and themselves ready for the fateful cruise to Cuba  (published November/December 2017)

In the summer of 1958, my father and I had just finished watching the Miami Marlins defeat the Havana Sugar Kings in a Class AAA International League baseball game. As we were leaving the ballpark, Dad suddenly remarked, “Jimmy, you and I are going to fly to Havana next year to spend a week in Cuba.”

I was 13 and could not have been more excited about the prospect of foreign travel to the exotic island nation. Unfortunately, 1959 brought revolution, Fidel Castro, communism and eventually a total embargo on travel to Cuba by U.S. citizens. My sense of disappointment lingered for a long time over the disastrous timing of this historic event.

THE PLAN IS HATCHED 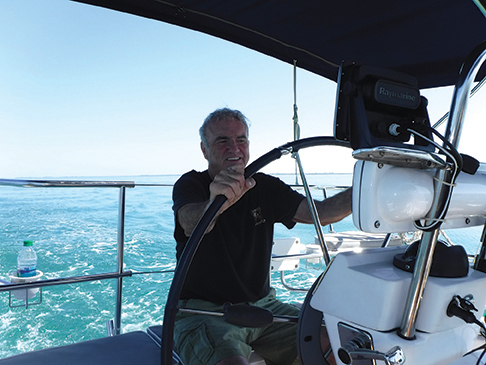 In the fall of 2016, thoughts of the Fifties were a distant memory. My father passed away years ago. The Miami Marlins were now a major league baseball team. Fidel Castro nearing the end, had ceded power to his brother Raúl some years before as Cuba stubbornly clung to its status as one of the last true communist regimes.

There were some concessions, however, as the Cuban people went through a desperate time (euphemistically known as the “special period”) in the early 1990s when support from the Soviet Union and the communist block crumbled. Some limited private enterprise was allowed in the form of small restaurants called paladares, freelance cab drivers and a burgeoning tourist industry. With this modest easing of restrictions came foreign visitors in cruising yachts, both motor and sail, but there was still a risk for Americans. Essentially, the embargo was still in effect and an American citizen faced possible fines and seizure of property upon return to the U.S. after visiting Cuba. Then, in January of 2015, restrictions loosened with the issuance of 12 approved categories of travel.

I have always enjoyed being on the ocean and have owned several sailboats through the years. Although I had not sailed in seven years, I decided to purchase a 31-foot Catalina sailboat, named Sea Horse. My wife, who is Russian, and I were discussing the new boat over drinks with some Russian friends at a local hangout. Our conversation drifted to the possibility of sailing to Havana and immediately I had two volunteers to serve as crew for the trip; Vadim, 58, a businessman who lives in the Atlanta area, and Alex, 38, the graphic arts director of an Atlanta based company.

Our goal was to join a rally that was being organized for an approved round trip cruise to Havana’s Hemmingway Marina. From there we could explore the long forbidden island. This would be a major project as the boat was now in a marina in Gulfport, Mississippi almost 800 miles from Havana and 700 miles from Key West. In addition, there was government red tape as certification from the Coast Guard and U.S. Customs and Border Patrol was required even under an approved category. Finally, the logistics and coordination necessary to sail down to the jumping off point, Key West, were problems yet to be solved. Over many drinks that night the final consensus was summed up in three words, “Let’s do it!”

GULFPORT TO PANAMA CITY
The first leg of the journey involved sailing to Mobile, Alabama for a maintenance inspection of the 21-hp. diesel engine and repair of a faulty autopilot. The work would be done at a marina located on the upper shore of Mobile Bay. As I had fractured eight ribs and punctured a lung in a freak bicycle accident four weeks earlier, I hired a retired Coast Guard Officer to accompany me. The 75-mile trip was uneventful.

The service work was completed by late February and, accordingly, I set out for Panama City on March 1 under heavy fog with a new crewmate, Alex. We navigated down Mobile Bay and eased into the Gulf Intracoastal Waterway, a scenic route stretching for 35 miles to the Pensacola Ship Channel and beyond. Along the way Alex and I passed Lulu’s restaurant, operated by Lucy Buffet (Jimmy’s sister) and entered Big Lagoon where Kevin, our retired Coast Guard Officer, hopped aboard from the pier leading to his condominium building. After a few more miles, captain and crew exited into the Gulf of Mexico through the inlet to Pensacola Bay.

A dark moonless night awaited us. Upon reaching the open ocean, waves driven by a strong wind from the south pounded us to starboard. This would continue hour after hour. As Alex put it, “This is one bad ass trip! “

To add to our discomfort, the autopilot was now of no use as it could not hold the compass heading. We turned it off and steered manually. Each of us agreed to take a two hour watch, which meant two hours on the helm and four hours off.

The next morning I awoke to the sound of Alex’s voice: “Hey, there’s a ship in the distance flashing a white light directly at us!” 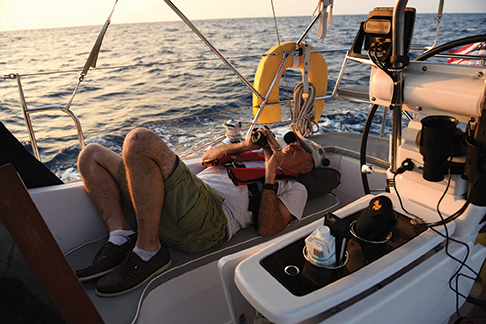 Kevin quickly hailed the ship on the VFH radio and reported, “This is a navy war ship. They are warning us to turn north to avoid a missile test area!”
Alex quickly turned the wheel to avoid the target zone. Finally, after 150 miles and 24 hours at sea we sailed into St. Andrews Bay and pulled up to Panama City Municipal Marina. Docking, I noticed a green substance splattered on one side of Sea Horse.

“I’m afraid I had a bout of sea sickness last night and I christened Sea Horse,” Alex admitted. I appreciated his sense of humor as I had been in a similar position many times in the past. At any rate, Alex performed his duties throughout the night without complaint. After securing the boat, we drove Kevin back to Pensacola in a rental car before heading back to Atlanta.

ON TO KEY WEST
After a week dealing with some work related issues, I returned to Panama City. Kevin would crew with me for the longest open ocean segment of the journey, 220 nautical miles from Panama City to St. Petersburg, FL, 80 miles from the nearest land. Ironically, weather-wise this proved to be a fairly calm transit. The only complaint was the monotony of the 36 hour passage and two hours on, two hours off turns at the helm; several times I nodded off and awoke startled and cursing the defunct autopilot and the marina that failed to fix it. We arrived at night and docked Sea Horse at a St. Petersburg marina.

Kevin returned to Pensacola and my friend Vadim met me for the 125-mile stretch along Florida’s west coast from St. Petersburg to Marco Island. After a three-day delay for a passing cold front, we departed, hoping the worst of the hazardous weather (high winds, thunderstorms, increased seas and small craft warnings) was behind us. Despite our hopes, rough weather lingered for another day. After 70 miles along the coast, we neared the Port Charlotte area in darkness.

“To the sailing vessel approaching Boca Grande Channel, did you fire a distress flare? Are you all right?” A fast approaching Fire-Rescue boat from Port Charlotte made contact over the marine VHF radio.

As to whether or not we were all right or not, I was beginning to wonder after listening to Coast Guard radio operators trying to locate the unidentified boat. We decided to seek shelter in Charlotte Harbor; the wind and wave turbulence in the shoal waters near Boca Grande Channel made Sea Horse difficult to control and our mast was oscillating severely from side to side.

Vadim and I entered the harbor, dropped anchor and spent the night listening to the Coast Guard continuing to issue calls for the mystery boat that had set off the flare. The next morning ushered in a beautiful day. We set forth, soon passing Sanibel Island, a unique stretch of land that runs east to west rather than the usual north to south pattern found in Florida. Because of its unusual geography, Sanibel is well known for its wide variety of sea shells. We approached Marco Island late that afternoon, tied up at a local marina then left for another short break in Atlanta.

Three days later, I returned to Marco with Paul, a retired Delta Airlines pilot and friend I had known for many years. A new problem confronted us: the voltmeter on the instrument panel registered zero. If the reading was correct that meant the alternator supplying a charge to the batteries was not functioning. After a phone call to our Coast Guard buddy, a test determined that the alternator was fine and the problem was nothing more than a defective voltmeter reading. 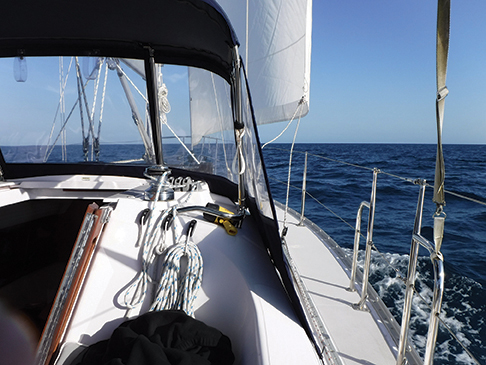 At daybreak, we sailed out Capris Pass and were greeted by sunshine, mild winds and calm seas for the 90 mile passage due south. The good weather continued until late afternoon when the winds and seas intensified 15 miles out from our destination, Key West. Dodging a line of fishing boats, our main challenge loomed ahead, navigating the potentially perilous entrance to the Northwest Channel at night.

The entrance is bordered on both sides by rock jetties. The current can be extreme and only the outer part of the east jetty shows above low water. Dozier’s Waterway Guide indicated this channel should only be attempted at night by “experienced navigators.” My confidence level sagged; I didn’t feel like an experienced navigator. In addition, I am color blind and would need Paul to help differentiate between the red and green channel markers. 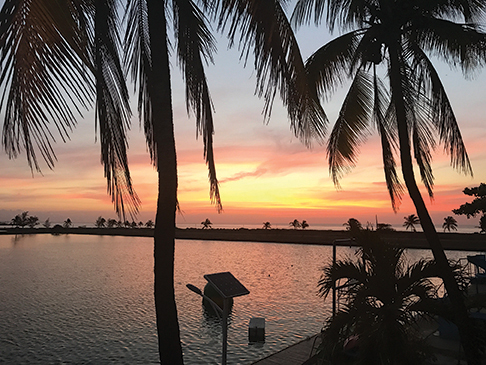 Paul and I monitored the chart plotter intently and visually spotted the marker buoys as we passed safely between the jetties. Advancing down the long channel, we found an anchorage in a small cove strangely devoid of other boats. The next morning we understood why. We were 50 yards offshore from a naval base surrounded by two Zodiac inflatables with a complement of Navy Seals conducting training exercises! We hastily raised anchor then made way to Stock Island Marina six miles to the east. With one week to go before our departure date of March 30, Sea Horse was now poised to join an armada of 60 yachts that would sail in company to Havana, Cuba.

In Part Two, the author and his friends join a rally and sail across the Gulf Stream to fulfill his lifelong dream of visiting Havana.