The outboard cut out just after we left the dock and crept the dinghy out from the mangroves into still, black water. It was a new moon, and the wash of stars overhead was our only light source. We’d meant to clean out the carburetor before coming ashore but were too stunned at the serenity around us upon dropping our anchor in Bahia Honda earlier that afternoon to get any work done. Besides, we were anxious to get off the boat for a rare evening meal ashore at a jungle lodge we’d found hidden beneath the canopy, one of  the  many  gems  we  discovered  scattered among the islands of Bocas del Toro, Panamá. 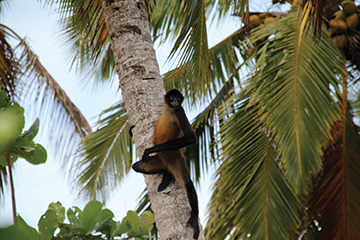 A few more tugs yielded nothing; the engine wouldn’t start. We only had a few 100 meters to go, but after a meal of fish curry, papaya salad and a few Pisco sours, rowing even a few strokes seemed a chore. We had no choice, though, so I reluctantly grabbed an oar and dipped it into the blackness beneath us. Suddenly the water came alive, and our miniature wake was set ablaze with the brightest trail of blue-green phosphorescence I’d ever seen. In awe, we fell silent then fell into rhythm paddling our way back to the boat, the only boat at anchor in this deep bay and reveled in the quiet beauty surrounding us. 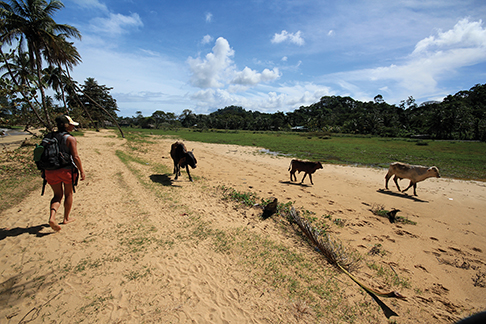 I later found out that this is not a rare occurrence in this part of Panama. Many cruisers have similar experiences: anchoring alone someplace that seems too good  to  be  true  at  first, and somehow it only gets better.Bocas del Toro is an archipelago in the Western corner of Panama’s Caribbean coast. The province is comprised of nine main islands and their smatterings of islets and mangrove patches spread out from northwest  to  southeast.  For boat owners,  the  main  attraction lies in its geographic position, which is safely outside the hurricane zone. Add to that its uncrowded anchorages, clear Caribbean water, ease of travel between  islands and dry  winter months. It’s not hard to understand what makes it a prime destination for cruisers. What’s more, Bocas del Toro retains a  raw  Caribbean  flavor  that  in  regions  further  east  has  been lost to tourism, awkwardly morphed into high cost “charm”. 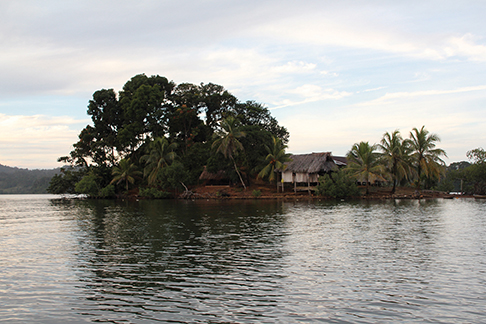 On the islands of Bocas del Toro, you won’t see lounge chairs lined along  manicured  beaches, waiters  trudging  through pink sand with trays full of umbrella-topped cocktails. You will find shorelines that are deserted except for driftwood and pelicans, serene mangrove-­lined coves lying in wait for visitors, and jungles housing  monkeys, sloths and countless  species  of  tropical  birds.  Once  just  another  Caribbean  stepping stone where  sailors could escape  the  threat  of  tropical  storms, Bocas  del Toro has become a destination unto itself. As we discovered, the best way to experience it is to sail a bit further off the (not so) beaten path.

Panama was the first international stop on the route my boyfriend Matt and I had planned from Rhode Island to Western Australia. We chose Bocas del Toro for its legendary winter surf and notably undeveloped islands.  We left the States in late December  and arrived 10 days later with  a  snapped steering cable from our  shakedown sail in the Caribbean Sea.  This rendered us immobile, making Bocas Town, the archipelago’s main hub, our home base for a month.

There are worse places to be stuck. Bocas Town has two marinas, safe anchorages, an airport with daily flights, multiple grocery and hardware stores, dive and surf shops and restaurants and bars. English is spoken nearly everywhere and the currency throughout Panama is the U.S. dollar. There  is  a  well organized  cruisers’  net  on  both  VHF  and  SSB  that  acts  as  an  open  forum/help desk/yard sale for community minded sailors. We even discovered a contingent of loyal  Patriots  fans  on  a  certain  Sunday  in  February.  But  it  didn’t  take  long  before  the  same  things that made life in Bocas convenient began to make us weary. We’d come to Panama for its unspoiled beauty and the solitude of its tropical anchorages, not to watch the Super Bowl. 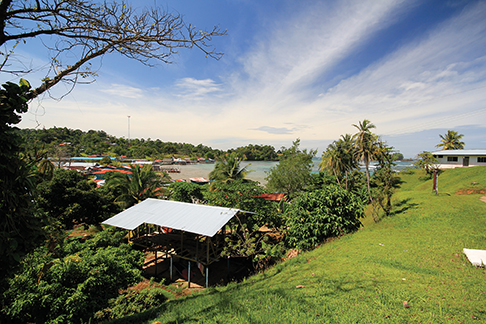 We spent our nights poring over charts and guidebooks, preparing for the departure we hoped was upcoming.  We  would  work  our  way  from  top  to  bottom,  departing  from  Isla  Colon  and  arriving  eventually  at  the  Kusapin  peninsula.  Finally,  on  a  Friday  evening, our  steering  cables arrived and by Sunday morning we were off, loaded with fresh fruit and topped up with water as though we were leaving on an ocean crossing. In reality it’s merely 30 miles from Colon to Kusapin, but you could spend an entire season exploring all that it contains.Bocas Town would turn out to be the only place we found this easy to leave. Our trip became a series  of  arrivals  and  departures,  a  fluctuation  between  presence  and  anticipation.  We  bypassed the tranquility of Bocas del Drago for Swan Cay, an ominous looking rock island at the northern tip of Isla Colon that is home to the red billed tropic bird. A week later we stopped for some land based exploration at Red Frog Beach on Isla Bastimentos. We followed the dirt road past the main beach and restaurant, passed by several ocean access points, and continued until we  were  deposited onto  a  beachfront  construction  site.  We  kept  going,  and  discovered  a  mile-long  stretch  of  shoreline  devoid  of  people.  It  was  only  a  few  days  later  and  a  stone’s throw from the relative crowd of the Red Frog anchorage (a dozen boats) that we discovered the solitude of Bahia Honda and its showy bioluminescence. It was there that possibility was most vividly displayed before us, and where we were struck with the seemingly obvious notion that if we just went a bit further the rewards would outweigh the effort.

The  options  for  quiet  anchorages  in  the  mangrove  patches  at  the  southern  end  of  Bahia  Almirante are endless and to get there we navigated our way through the narrow gap between Cayo Nancy and Isla Bastimentos. We chose Johnson’s Cay over the Gallego Cays, though it may as well have been any of the unnamed lumps of green strewn across the dazzling blue there.
What I kept finding most incredible was that these places were no secret. We didn’t venture into uncharted waters to find someplace to be alone. We didn’t bushwhack through jungle to find our own corner of deserted beach. That’s the beauty of this archipelago. And each time we left one of these private paradises for another it was with mixed feelings. Our excitement for the future was imbued with a hesitance to leave behind places that, if just by our discovering them for ourselves, had become meaningful of us. 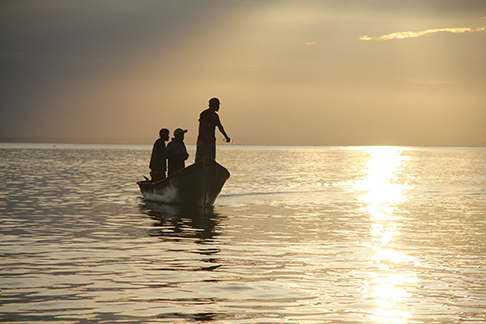 The  Kusapin  Peninsula  is  connected  to  mainland  Panama,  so  technically  it  isn’t  part  of  the  province  of  Bocas  del  Toro.  However  it  is  accessible  only  by  boat so  is  an  extension  of  the archipelago to anyone traveling by sea. We sailed into Laguna de Bluefield around lunchtime under a blazing sun and diminishing wind. The deeper we got into the bay, the further we felt not just from the rest of Bocas, but from the rest of the world. The bay was free of hostels and restaurants and lacked the distinctive buzz of outboards. Instead clusters of thatched roof huts appeared here and there, and the few people we did see fishing in their cayucas or paddled through the bay silently. We passed by the nearest anchorages, deep, tempting coves and made our way instead to the farthest end of the bay where we’d read there was a trail leading to the ocean. We arrived to find just one small, blue hulled sloop sitting sleepily at anchor.The people on this part of the Kusapin peninsula are Ngobe Bugle Indians who live mainly off their harvests from land and sea. On our short walk over the hill that separates the bay from the  ocean  we  passed  by  bananas,  pineapples,  taro,  and  breadfruit  growing  just  off  the  path.  The surf was pumping, but the waves were empty. A couple of cows lazed in the shade, staring as  we  walked  past. Children  ran  up waving  and  shouting  “Hola!”  All  of  these  things  were  available elsewhere in Bocas del Toro, we’d had plenty of opportunities to buy fresh fruit, sit on beaches, chat with locals and surf—but not like this, not all at once and in such an intimate setting.  Here  we  felt  an  immediacy,  a  direct  connection  to  the  place  at  which  we’d  arrived. We’d gone just a bit further and seemingly reached another world. And yet we felt somehow closer to what surrounded us. Just as on that moonless night in Bahia Honda, all we could do was be a part of it.
When you’re always on the move, always chasing the next discovery, your time in each place is limited  and  leaving  can  be  the  hardest  part.  The  allure  of  places  like  these  tug  at  some  with  more  force  than  others.  When  we  left  Kusapin,  the  blue hulled  boat  was  still  there. We’d learned that her owner had been working not all that urgently on fixing his problematic engine. Weeks later, we ran into a friend who had recently returned from a trip to Kusapin himself. 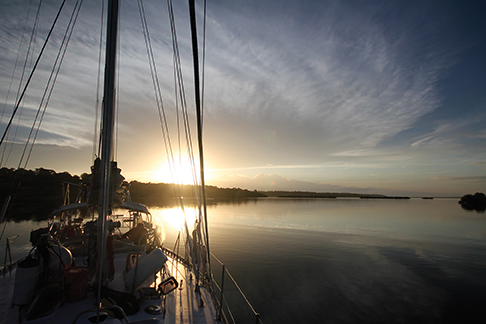 “Alessandro?  Yes,  he’s  fixed  the  engine.  But  he’s  still  there.  Why  would  he  leave?  He’s  like  Jesus. A trail of kids follows him wherever he goes. He lives off of breadfruit and bananas. Every night a pod of cayucas is tied to his stern. And most of the time his is the only boat there.” I pictured the little blue boat alone at anchor in that deep, still bay, a vast night sky above and nothing but ocean and jungle sounds penetrating the silence. Even without the engine issues, it was obvious why he’d chosen to stay put.
Our friend continued. “Now he says he’s not coming back to Bocas. He wants to stay in Kusapin. Forever.”Kate and Matt are slowly sailing their way to Australia from Rhode Island onboard their 43-foot cutter rigged sloop, Tamata. You can follow their journey via their website www.thelongway.net.

View all posts by Kate MacBain