From the marina in Deltaville, VA on the Rappahannock River, we pounded upwind on Ukiyo, our Catalina 34, through small craft advisory waves, a “noser” as it’s called here. We were bound for Reedville, Virginia on an oppressively humid day. But for a lone tanker heading north, the central Chesapeake was ours.

The five-week passage up the East Coast had been full of educational moments: a dying starter-solenoid, a torn sail, soft groundings, fouled props; it was all a part of the fun and most times there’s nothing more fun than sailing.

The wind clocked, the sails luffed and even with an engine assist we were barely outpacing the sea nettles. My teenaged crew grumbled that this was supposed to be enjoyable, and that I had promised shore leave and a restaurant tonight. It was time for a change of heading. I fell off the wind and there before us on the chart, by good chance, lay Smith Island.

Settled by colonists from Cornwall, England and Wales around 1657, it is the only remaining inhabited offshore island in Maryland. The residents, through isolation and determination, maintain their unique character and dialect, adapting their professions as the island changed over the centuries.

And boy, has it changed. For many years the bay has been rising, the island sinking. According to David Schulte, a marine biologist with the Army Corps of Engineers, “the tidal range out there is around 2.3 feet, so the island is only about one-foot above mean high water; and the town about four feet above.”

With each storm it loses shoreline by the acre—1,200 in the twentieth century, leaving only 900 acres that are habitable today. The Maryland Department of Natural Resources estimates that by 2100 Smith will be almost completely under water as the bay’s average level goes up nearly a foot. Like their sister island Tangier to the south, they are quickly running out of time as residents try to save their homes and businesses.

It’s not just the erosion that hurts, the population has been halved since the 1980’s, to about 240, as young islanders eschew the crabbing life and uncertain future and move to the mainland in search of better career opportunities. But the remaining islanders, most of whom descend from the original families of Tyler, Evans and Bradshaw, are a hardy lot and are determined to stay.

After Superstorm Sandy roared through the area in 2012, some homeowners were offered a generous buyout from the state. As a group they flatly rejected it and organized as Smith Island United to fight for grants to construct jetties around the three villages of Ewell, Rhodes Point, and Tylerton.

“They were just going to buy us out and move us off the island” said Rhodes Point resident John Tyler. “It would be a shame to let places like this go from neglect, to let them wash away.”

To a certain degree their pleas have been heard. Construction should begin this year on a $9 million jetty and dredging project by the Corps of Engineers for Rhodes Point.

Ukiyo rode much better on this point of sail and within a couple of hours we spotted several dead rise crabbing boats tooling around, tending traps. I knew this meant we were on the right track and soon I spied what appeared to be homes floating on water and low grassy marsh to the northeast.

As we made the turn at the break wall, the shrill cry of the depth sounder confirmed that we had finally entered Big Thorofare. I came here in 2001 with both sails up, dug the keel into the mud and suffered the bemused stares of a dozen watermen as they made their way around the tourist sailor. Older and better equipped this time, I zoomed in on our chartplotter and carefully tiptoed down the middle of the dredged channel, paying extra heed to the recently placed floating channel markers. 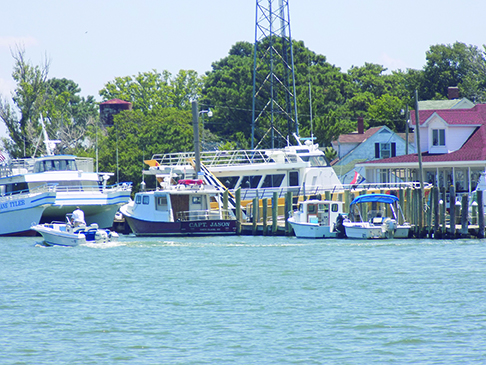 Turning on to Levering Creek, we entered the village of Ewell and tied up at Smith Island Marina in one of the six transient slips. Just when I thought I’ve seen it all, we discovered that this was a self-serve marina. The lounge had an unlocked door, a signboard with instructions for visiting boaters, and a cashbox to deposit the $1 per foot per night fee. My kids couldn’t believe it, I had to explain what the honor system meant (and why you better never violate it).

“Welcome kids, to the strange and wonderful world of Smith Island.”
Heading off on foot, we marched south down the main road but were turned back by a combination of heat, bugs, and hunger. Back in the tiny village, we repaired to the Bayside Inn Restaurant for some cream of crab soup and world famous Smith Island chocolate cake, the official dessert of Maryland. At 1530 Smith experiences the closest thing to a rush hour they’ll ever know: the ferry boat blows its horn and a gaggle of tourists race to pay their tabs and scurry on board.

Every sunset here is a breathtaker, but you better have the bug screens in place, and don’t forget to turn off your saloon light. I came back to Ukiyo and she was full of sand flies that crawled through the screen. And with the gloaming comes a profound calm on this darkened sanctuary from the neon insanity of city life. Only the lighted homes prove that anyone lives here. Despite the lack of a nightlife, Smith was named by National Geographic as one of the world’s best trips of 2016, along with New York City, Hokkaido, Japan, and Bermuda. 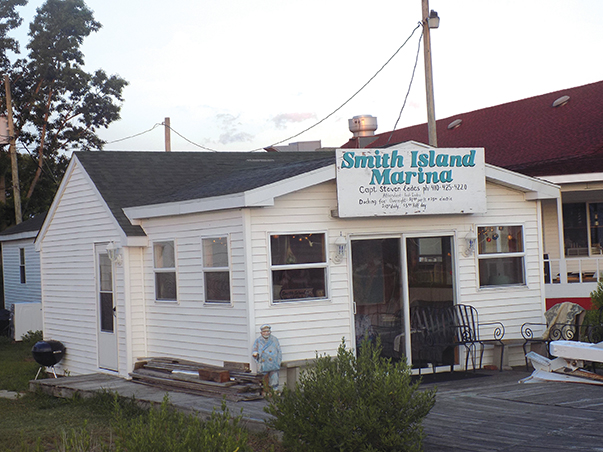 Early next morning I could tell by the height of the dock that we weren’t going anywhere. Indeed, we were firmly planted in the mud for a few hours, so it’s off for another excursion. We rented a golf cart and were told not to visit Rhodes Point 1.7-miles away as the battery would die on the way back. The tour is a quick one; there are only five short roads.

By noon we were floating again and hastily prepared for departure before high tide. There are other channels that exit Smith but Big Thorofare, to the west, is the only one that can handle a keelboat. Watching the depth sounder closely, we crept along, retracing our path from yesterday; with the southeast breeze we should be able to sail all the way to the Potomac.

To our left, the watermen moved about, plying the only trade they’ve ever known. One of them overtook us and we waved as he passed. I’m hopeful that his generation won’t be the last to call Smith home. Back on the bay Smith Island quickly dropped below the horizon and, like a mirage, was gone.

View all posts by Robert Beringer