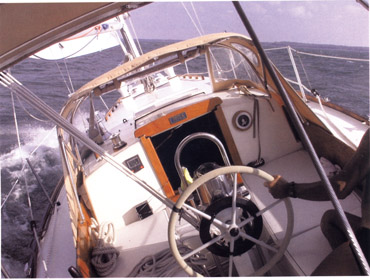 TARTAN 34 •
There was a time, not so long ago, when boats in the mid-30-foot range were thought of as the “right” size, combining ease of handling with enough waterline to make quick passages. In 1967 the boatbuilding firm of Douglass & McLeod Plastics Corporation, makers of the Tartan line of sailboats, commissioned Olin Stephens to design what the company called a “high performance offshore cruising racing boat.” The company wanted a boat that would fill the marketing gap between their 27-footer (also designed by Stephens) and their Blackwatch 37, a Ted Hood design.

The result, the Tartan 34C (C for “classic”), was a success by any yardstick, with 525 boats built between 1967 and 1978. The T34C was introduced in December of 1967 and in the Southern Ocean Racing Conference’s 1968 race a T34C won her class. The boat has gone on to win numerous offshore races, including the Port Huron-Mackinac and the Marblehead-Halifax races, among many others. At least one circumnavigation and too many Atlantic and Pacific passages to list easily have been done by T34C sailors.

Commonly thought of as a sloop, there were 25 T34Cs built as yawls. After a fire in January 1971 destroyed all the T34C molds, new ones were “splashed” using a Tartan employee’s boat. The Tartan 34 had its design antecedents in S&S design number 1786, Deb, in 1964, now sailing as Sunstone and owned by Tom and Vicky Jackson, an English couple whose exploits as world cruisers are familiar to readers of this, and other, sailing magazines. Deb, 38 feet long, was followed two years later by design number 1873, the Deb 33-Class. The lines of both boats are strikingly similar to those of the T34C, design number 1904, in 1967.

The design certainly merits the appellation of “classic.” Blessed with a sheer that is just right, overhangs that fulfilled not only the CCA rules of the time (which tended to favor heavier, keel center-boarder boats) but also lent an air of grace to each end, the T34C is an attractive boat by most standards. The boat’s inherent good looks and its good sailing manners have made it the sort of boat that owners keep, cherish and restore.

The rig went through three changes in boom length in an effort to reduce the boat’s tendency to weather helm. The “E” measurement went from 13 feet, six inches to 12 feet to 10 feet, six inches over the years, but most owners report that the boat can be fine-tuned by adjusting the centerboard, a pivoting steel affair that weighs 65 pounds.

The cockpit, over nine feet long, is spacious and wide; with the factory-standard tiller lifted out of the way, there is ample room for entertaining or just quiet contemplation of a well-earned anchorage.

Going forward, the two-foot wide sidedecks inspire confidence, and the foredeck is roomy enough for sail handling, sunbathing or a small inflatable dinghy. Teak toerails provide good footing, with additional teak on the coachroof handrails and the cockpit coamings.

Down below is where the boat shows its vintage. The galley is small and the standard two-burner alcohol stove barely adequate for cans of Dinty Moore stew. With a beam of 10 feet, two inches, the hull is easily driven, but the price for that is a certain degree of coziness below. The saloon has a table that folds up against the forward bulkhead, and this opens up the area considerably. A small head is to port, with the keel-stepped mast offering a good handhold for users of the smallest room on the boat. The V-berth has, and needs, the insert for the big end, while the little end is truncated nicely, giving more foot room than you might expect. The chain locker is a simple affair, open to the V-berth.

There are three good sea berths, a quarter berth to port in the stern, and the settees, properly straight, offer a berth on port or starboard tack. The port settee has a slide-out panel under the cushions that produces a double bed for use in port, while still allowing room to go forward.

At the base of the companionway steps sits the engine, offset to starboard with the prop angled but placed in the center at the aft end of the keel. This was done to counteract prop walk, and the engine’s low, amidships placement adds to the boat’s stability and allows excellent access. The exhaust is routed through the bulkhead at the forward end of the quarter berth, where the standup chart table is located. The bulkhead extends to the overhead, and, in versions with the Atomic 4, the engine vent blower also runs within it.

With over 500 boats in the fleet, an active and knowledgeable owner’s association and factory support that is a model for the rest of the industry, the Tartan 34C is truly a classic. Prices for used T34Cs are stable, even appreciating, as more sailors learn of the qualities of this boat. In the words of its designer, “there is nothing outstanding or unusual about it; everything just seemed to work well.” 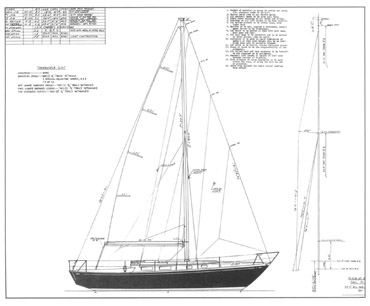