With favorable northwest winds in the forecast, we headed south after relaxing for two days in North Harbour, Quatsino Sound on the west coast of Vancouver Island in Canada. Our family of four was circumnavigating the island in our 38-foot ketch and we were now working our way down the beautiful and desolate Pacific side of Vancouver Island. We had an uneventful rounding of the Brooks Peninsula, which can be a treacherous passage. For us, it was a motorboat ride, which sure beat the alternative. The sky cleared as we rounded the cape and we marveled at the untouched rolling green mountains making up the peninsula park.

Our guidebooks all agreed that the little island group of the Bunsbys, tucked underneath the Brooks Peninsula and snuggled up next to the mainland, were not to be missed. After weaving through the many rocks and reefs guarding these forested little jewels, we made our way to the fully protected main anchorage, Scow Bay on Big Bunsby.

We set our anchor in 60 feet of emerald green water, turned off the motor and listened to absolutely nothing. Tucked away between the Pacific Ocean and miles and miles of protected forests, it was absolutely still. After tuning our ears for a while, we could make out the sound of a bald eagle calling out in the distance.

Once our two daughters were tucked in bed that night, my husband Michael and I sat out in the cockpit enjoying the last of our favorite wine. We watched the sun set over the Brooks Mountains. It was a stunning show, with the day’s last beams spilling down from low clouds that had settled between the peaks. Orange and yellow and pink and finally blue.

The light was dim and Michael heard a rustling sound on the shoreline just in front of our bow. We both strained our eyes to see what was making the noise and gaped in awe as a huge black shape emerged from the bushes. For the next 15 minutes we watched an enormous black bear stroll along the shore, reaching on her hind legs to grab juicy thimbleberries off the highest branches and sniffing amongst the rocks for other morsels. 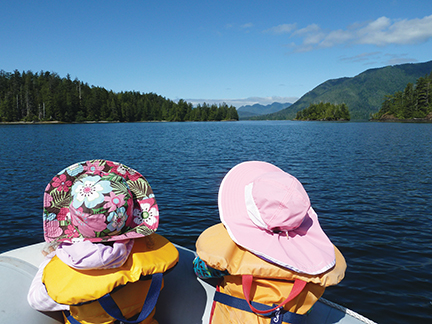 There are no trails on the Bunsbys, which was just fine by me. We spent hours trolling slowly along in our dinghy exploring hidden lagoons and nooks, marveling at some of the most amazing rock sculptures we’d ever seen. We gazed into crystal clear tide pools teeming with life: hermit crabs, sea stars, fluorescent green anemones, small fish and crabs fighting for space in the smallest pools. We explored little pocket beaches, the girls finding favorite seashells and bits of glowing sea glass in the sand. And every now and then, we’d spot a sea otter popping his head out of the water to peek at us—guests in his wilderness.