Over the centuries, north European sailors heading to the Mediterranean and points south have faced the hardest challenge of their voyage on the first leg: getting away from the grips of the English Channel and across the infamous Bay of Biscay, then running down the inhospitable coast of Portugal. My wife Gloria and I faced that challenge when we took delivery of Tango, our Southerly 42RS from the Southerly Yard in beautiful Chichester Harbor, just east of Portsmouth, England. As with most experienced coastal cruisers, the prospect of such a voyage was not something we were looking forward to, and alternatives such as shipping her south were considered.

A thorough search for cruising information along the Atlantic coast of Europe yielded cruising articles on Normandy and Brittany, the cruising grounds of many British and French sailors, but very little else along the southwest coast of France, northern Spain and Portugal. Fortunately, the Royal Cruising Club pilot books came to the rescue, suggesting the possibility of day sailing our way down these beautiful coasts. It took us five weeks of cruising in July and August, and over 30 ports of call to reach Ayamonte, the westernmost harbor in southern Spain. We sailed all of it in short hops of 25 to 60 nautical miles a day, with enough time for visits ashore in the most stunning and diverse scenery. This stress free voyage was made even more enjoyable with the advantage of our variable draft sailboat, but can be easily accomplished by any prudent sailor with a fixed keel under the hull and proper attention to tides and charts.

FRANCE
Friends have asked which was our favorite place along our route. Although all stops (except one memorable exception) in our voyage were charming in their own way, there are a few that stand out. First came Brittany’s islands and ports. Although we had been to mainland France on multiple occasions, we were not aware of the beauty and variety of its offshore islands. Iles de Glenan and Ile Houat, for example, with unspoiled white sand beaches, a choice of tranquil anchorages, and crystal clear waters, reminded us of the Bahamas, albeit a bit colder. And of course, the little ports nestled inside small towns, particularly Saint Martin en Re, were well worth the trouble of being packed five deep after waiting for the tide and the gates to open. The rivers along this coast are all navigable and worth exploring, and are on the list for our upcoming cruise.

Further south, a must stop is the Bassin D’Arcachon, a day sail south from the mouth of the Gironde River; along miles of a mostly deserted sandy beach, there is not a rock in sight. Arcachon’s entrance is challenging but well marked. Because of the moving sands it is best to turn off the chartplotter and pay close attention to the buoys until you’re well inside. The Bassin’s main attraction is that it boasts the largest sand dune in Europe with a great view from the top and hundreds of people paragliding and sandboarding down its slopes. The Bassin is also a great place for gunkholing and beachcombing. It has been a summer resort for ages, and affords multiple anchoring opportunities. The marina is located only a few blocks from the train station, making a daytrip to Bordeaux an easy and interesting side trip.

After hitting the southern tip of the French coast, past Biarritz and Saint Jean de Luz, we turned due west for another 300 plus nautical miles of cruising. This beautifully rugged coast, nestled in between mountains such as the Pyrenees and the Picos de Europa, and Biscay Bay, is stunning. In addition to little ports, intriguing towns and larger cities, beaches and rivers, one can add day hiking trips up these mountain ranges.

Just across the border from France, is Hondarribia, a Basque town with a beautiful and colorful cobblestoned old town center, a well-maintained modern marina, and a tapas bar scene that is not to be missed. Further east, the cities of Bilbao, Santander and Gijon with modern marinas and easy provisioning are worth a visit. We prefer smaller towns, and particularly enjoyed our stay in San Vicente de la Barquera. It has a small, protected harbor with limited anchoring space, a stone wall that is shared with fishing boats, a large sand bank in the center, a beautiful beach, great restaurants and easy access to hiking at the Picos de Europa.

There are a few secluded anchorages on the way to A Coruna that are worth mentioning. Santonia, a wide estuary with an easy and deep entrance 20 miles west of Bilbao provides good anchoring opportunities and nice beaches. And Cerdeira, a stunning Ria just east of A Coruna, also with an easy entrance and deep water anchoring, has a relaxed summer town atmosphere. Also memorable was sailing around Cabo Prior—a sometimes difficult passage at the northwest tip of Galicia—on a beautiful sunny day, surfing down waves at 10 plus knots under reefed main.

A Coruna is a traditional stop for those crossing Biscay on their way south, with an easy entrance and a convenient marina adjoining the beautiful old town. Just south is Cabo Finisterre, which is another challenging cape in the region. This is the point where sailors turn due south for the next leg down the coast of Portugal. Less frequented by ocean voyaging sailors are the beautiful cruising grounds of the Rias Altas and Rias Bajas, between A Coruna and Bayona. One could easily spend a whole summer cruising here. Memorable anchorages along this coast were the rugged Ria de Camarinas, a beautiful, protected and easy to enter bay that provides a perfect staging point for rounding Finisterre, and the pristine and clear waters off Islas Cies just north of Bayona. Bayona itself proved to be a bustling yet charming town, with excellent marina facilities and a perfect provisioning spot before embarking on the more difficult Portuguese coast ahead. 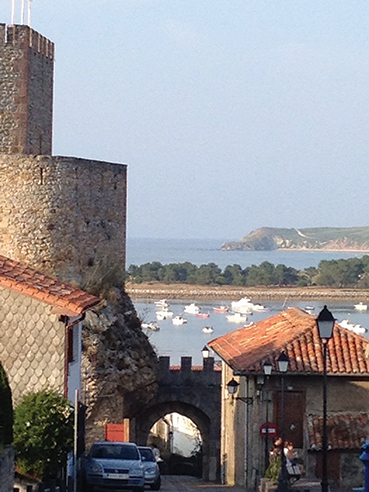 PORTUGAL
We left Bayona on a beautiful, sunny, windless morning with a very mild North Atlantic swell—perfect conditions to attempt the entrance to Foz do Minho, a few miles south. This river, which marks the border between Spain and Portugal, was by far the most challenging entrance of the entire voyage. It should only be attempted by the intrepid sailor with a shallow draft, or even better, a swing keel. There are no aids to navigation and the entrance channel goes along the shore between a pile of rocks on one side, and the beach on the other, with submerged rocks in between for good measure. The pilot says “the shallow river mouth is continually changing in shape, particularly regarding the position of the deep channel…” so you get the picture. Once inside, however, we were the only sailboat in sight. Seeing a sailboat on this river is so surprising that the Coast Guard came aboard for a visit as soon as the anchor was down and took care of entry procedures right there in our cockpit. We followed this up with a leisurely walk along an extensive beach that included an unmarked nudist section. The next morning the surf was up, and from the inside it looked as though waves were breaking across the entrance. For a moment it seemed we were trapped, but by retracing our meandering entry track we were able to get out safely and on our route south.

Yachtsmen tend to think of the Portuguese coast as best to be avoided due to its difficult harbor entrances, lack of facilities and extensive entry formalities, as paperwork must be completed at every port. Other than the cumbersome paperwork procedures, we enjoyed great sailing and scenery along the coast and good marina facilities in every port. On the other hand, very few anchoring opportunities exist along the way. Porto, not to be missed, has recently opened a new marina that was not there during our trip and looks promising. It also seems to be a much better option than Leixoes, the closest port to the north, which is an industrial harbor with a petrochemical plant upwind that coated the riggings of all sailboats in the harbor as we waited for the weather to settle after a front came down from the northwest.

Lisbon is a not to be missed experience. The marina at Cascais is first class and downtown Lisbon is an easy train ride away and worth a visit. Also worth a visit was, Sines, our next and last stop before turning east at Cabo San Vicente. It is a nice little port under an old fort and next to a well-kept beach town.

It was along this stretch of coast that we enjoyed the most exhilarating sail of the trip, before a stiff northwesterly breeze and 10 foot swell on the quarter. Tango is particularly suited for this point of sail, as we can swing the keel aft and partially into the hull, moving the boat’s center of rotation aft and minimizing the corkscrew movement typical of fixed keel sailboats under these conditions. At the expense of perhaps half a knot of speed, the boat behaves more like a surfboard sliding down the face of the wave. It was a great ride, made more memorable when we were overtaken by Tioga, a classic 59-foot Herreshoff ketch that came barreling down waves under mizzen, jib and yankee.

Our coastal cruise of Portugal ended in Ayamonte, Spain, after stops in Lagos and Villamoura, Portugal, which are typically used by sailors for provisioning before heading south to the Canaries or east into the Med. Ayamonte is a beautiful town at the entrance to the Rio Guadiana that marks the border between Portugal and Spain and is navigable for 20 plus miles of beautiful countryside along olive groves. It is an easy entry point into Spain and a great spot for crew changes.

Thus concluded our five-week, 30 port adventure. Except for a four day series of lows that delayed our departure from southern England, and perhaps two other one day delays waiting for weather along the Spanish and Portuguese coasts, the sailing was pleasant. Next time we do this trip we plan to take two months to ensure we have more time to relax and explore the smaller rivers along the Brittany coast, the Galician Rias, and to spend time revisiting some of our favorite ports.

Juan Florin is a lifelong sailor originally from Argentina. He has extensively cruised the Rio de la Plata and the northeast coast of the U.S. Juan also completed a one year, 10,000 mile voyage from Portsmouth, UK to Portsmouth, NH, cruising south along the Atlantic coast of Europe to the Canaries, followed by an Atlantic crossing to Antigua, then north through the Caribbean, Bahamas and up the ICW.

View all posts by Juan Florin