We are at anchor in a quiet cove, sipping coffee and listening to tiny waves lap at our hull. Mist moves slowly across the cold saltwater. Suddenly we’re aware of a presence—a huge shape moving under the water, a puff of air at the surface. The black outline of the whale’s body is hard to discern, but I can see white as he moves along the edge of a kelp forest. A slick fin rises out of the water, and we realize a pod of orcas has surrounded our small sailboat.

Some call these animals killer whales, which is colloquial but not incorrect. Orca comes from the scientific name Orcinus orca, which translates to “creature from the underworld.” Both names reflect the defining characteristic of these animals: they are phenomenal hunters. They move with prowess and cunning, and their physical strength and underwater agility are difficult for human minds to grasp. According to Caitlin Birdsall, coordinator of the British Columbia Cetacean Sightings Network, their sharp, pointed teeth have evolved for one purpose, to eat meat. “They’re apex predators,” she says. “Seeing them hunt can be gruesome.”

“It’s easy to see why people were terrified of these animals fifty years ago,” she continues. “In British Columbia, guns were mounted on walls near harbors with the intention of shooting orcas. The guns were never used, but they are still there as a reminder that these whales haven’t always been such spiritual icons of the coast.”

While much remains to be learned, today we have a better understanding of these complex mammals. For example, the whales surrounding our boat were almost certainly a family. Orcas live and travel in matrilineal family groups, meaning that nearly all orcas stay with their mother and their mother’s family. Four, sometimes five generations have been seen in pods—all descended from the oldest female. Breeding happens when two families come together. Male whales can live to 50 or 60 years old and females have been recorded living 80 or 90 years. Granny, a female orca who hangs out near the southern tip of Vancouver Island, is estimated to be more than a hundred years old. Think about that, if you are sailing in Puget Sound, you may interact with a marine mammal that was born during World War I.

Orca pregnancies last 17 months, females usually have their first calf in their early teens, and they stop reproducing between age 40 and 50, which is eerily similar to the human reproductive timeline. (To date, orcas and humans are the only mammals known to experience menopause.) In most species, the females don’t live long after they stop reproducing. Most post-reproductive orcas, on the other hand, live for 40 or 50 more years. To scientists, that hints at an evolutionary role: these older female whales are passing on knowledge and helping their sons and daughters continue to succeed. It’s a sign of a very advanced social structure. 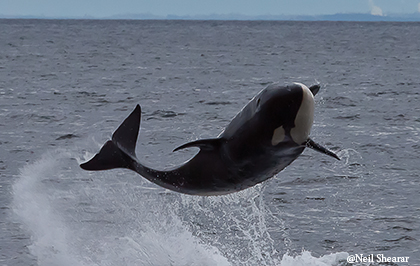 There are three distinct types of orca, divided into groups by what they hunt. The fish-eaters, who tend to hunt salmon and other fatty, nutrient-rich species, are the variety we know most about—simply because they show up where the fish are running. The second sub-species eats coastal marine mammals: harbor seals, dolphins, porpoises, and calves of gray whales or humpbacks. They’re less vocal, less predictable in their travel patterns and less well understood. The third kind—the offshore pods—are the whales we know least about, because they spend very little time in coastal waters. Scientists believe that they eat primarily fish, but have recently discovered that they also feed on deep-water sharks, rays and other whales. All of these orcas are technically the same species, but they don’t interact. They use completely different vocalizations and, as far as we know, do not communicate with one another. Genetics say they haven’t mated for thousands of years.

Boaters are most likely to encounter coastal orcas, and it’s very important to check with local authorities about safe whale watching guidelines, which differ between country and species. Orcas are protected under the Endangered Species Act, so ignoring these guidelines can be harmful to the pod and illegal.

As a general rule, be very careful if you encounter any whale, cut your engine, drop sails if possible and be very quiet. Propeller strikes are dangerous, of course, but noise and disturbance can be harmful as well. If you must travel nearby, give them as much space as possible. Remember that you don’t know what the whales are doing. While it’s estimated that 60 percent of an orca’s life is spent swimming and foraging, you may also have stumbled across a group of whales that are hunting, breeding or engaging in other social activities. “Boaters have this idea that if the whales didn’t want to be disturbed, they could just leave,” says Birdsall. “But you have no idea what other factors might be at play.” Remember the cumulative impact, too, as these animals can travel 100 kilometers per day. You might just be one boat, but there’s no way to know how many humans they’ve encountered on their journey.

Orcas will often ignore boats completely, but sometimes they do approach vessels at anchor or adrift. Brian Goodremont, president of the Pacific Whale Watch Association (PWWA), suspects that “…they’re curious about us. We wonder what it would be like to explore the depths of the ocean; maybe they wonder what it would be like to walk on land. Killer whales are absolutely smart enough to be as curious about our lives as we are about theirs.”

It’s not impossible. Cetaceans have larger brains, proportionally, than humans. By all indicators, they feel deep compassion. They have long-term memory and demonstrate incredible ability for cognitive thought. We just don’t speak their language.

To an untrained eye, orcas may all look the same, but scientists catalog every whale sighting. Using identifying features like markings on the saddle patch and dorsal fin, any nicks and scratches, and different shades of pigmentation, scientists are able to piece together a record for each individual whale. In the United States, NOAA scientists use photos collected from marine biologists, whale watching experts and citizen scientists to record when babies are born, which whales are still alive, and how each family is spending time. The information has been invaluable in increasing our understanding of the species. 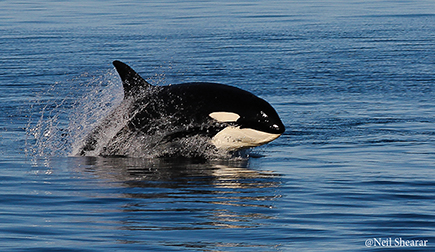 Cruisers and other boaters can help by taking photos of orcas. The dorsal fin and the saddle patch—the whale’s “fingerprint”—are the primary means of identifying the animal, so photos taken from the side are best. Even sightings without photos are useful because scientists like knowing where orcas have been spotted. To report sightings from your personal vessel, call your regional NOAA office.

Most sightings will be from a distance, but Goodremont once had an orca swim so close to his kayak that the whale had to turn sideways to avoid hitting the boat with his dorsal fin. “It’s intimidating!” he says. “There’s nothing to stop the most highly evolved predator in the ocean from eating you, but it simply doesn’t happen. That’s the question: why?”

What Goodremont says is true, despite recent media coverage depicting orcas as malicious— including the 2013 documentary Blackfish, which included gruesome footage of a Sea World trainer fatally dragged underwater by a captive killer whale—there has never been a recorded attack on a human by a whale in the wild. Scientists don’t know exactly why, but the fireside hypothesis is that we’re not nutritionally dense enough to bother eating. We don’t have the blubber of a marine mammal or the nutrient-rich flesh of spawning salmon. But even when humans fall in the water near a pod of killer whales, which is unlikely to happen, they simply wouldn’t attack us in the wild. “Maybe they understand,” says Goodremont. “When you look at these animals in their natural habitat, you get the sense that they have identified us as fellow intelligent, emotional and compassionate mammals. Maybe they respect that.”

Still, Birdsall cautions against anthropomorphizing. “We need to be respectful of all wildlife,” she says, “and when we’re on or in the water with them, we need to give them the space to go about their daily lives. Any human presence, whether it’s a sailboat, a motorized vessel, or a kayak, can be an intrusion if it’s too close. Consider any sighting a good omen, but be careful not to rob them of their wildness.”

For more information on safe whale watching guidelines in your area, call your regional National Oceanic and Atmospheric Administration (NOAA) office. For easy-to-read graphics and a layman’s description of migratory whale patterns, check out the publications by Be Whale Wise, available at www.bewhalewise.org. For all things whale-related, go to Pacific Whale Watch Association (PWWA) at pacificwhalewatchassociation.org. To report a sighting, contact the Orca Network at www.orcanetwork.org. To make a donation to support whale research, get in touch with the Center For Whale Research (CWR) at www.whaleresearch.com.

For more information on the author please visit www.charlotteaustin.com

View all posts by Charlotte Austin