Part 1: Getting to one of the western Caribbean’s best hurricane holes can be an education in patience and seamanship  (published January 2014)

Ninety minutes before high tide, Hanalei reached the sea buoy outside Livingston, Guatemala that marked the mouth of the Rio Dulce. This would be the last tide for a week with enough water to lift the boat over the only obstacle between us and the western Caribbean’s only hurricane hole: a 5 foot 3 inch sandbar.

Today’s tide would add 21 inches to make 7 feet, 6 inches deeper than our Amel Super Maramu’s 6 foot 6 inch draft. At three-quarter tide there should have already been enough water. Still, I was nervous. If we couldn’t make it over, the nearest safe port was 700 miles away in Panama. Was it a mistake to even try? All captains have doubts, I reminded myself.

FINDING A HOLE
For the past six months, when cruisers inevitably asked—“Where are you going for hurricane season?”— I couldn’t answer. Our lives were in transition. My husband couldn’t join me until the following winter. This year I would have to leave Hanalei alone for several months while I took care of business, but returning her to the U.S. temperate zone would eat up too much time and money. I needed a secure marina outside the hurricane belt. Panama and Colombia both qualified, but meant another weeklong passage; come December, cruising Central America would mean an upwind slog. Finally, fellow cruisers persuaded me to consider a safe, convenient, cruiser-friendly and inexpensive destination: Rio Dulce.

The Rio, or Sweet River, wasn’t a port so much as a cluster of marinas near its headwaters. The route from Guatemala’s only Caribbean port of entry, Livingston, began as a seven-mile jungle gorge with enough hairpins and switchbacks to thwart any storm surge. Next came El Golfete, a calm, ten-mile-long lake and manatee sanctuary. Another four miles upstream a bridge spanned the towns of El Relleno and Fronteras—often referred to as Rio Dulce. There, a couple of dozen marinas offered excellent, reasonably-priced shelter to hundreds of boats while their crews escaped summer’s oppressive heat and rain.

It sounded perfect: cheap, secure, and very convenient. Next December, Hanalei could make Roatán, Honduras or Belize in a day, provision, then cruise hundreds of cays between Mexico and Panama. There was a lot to like in that plan, but there was just one thing. At the river’s mouth, I had to get Hanalei across the sandbar. 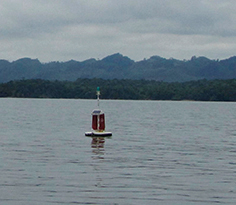 THE BAR
Cruisers called it the bar exam. They said that all it took was the right tide, an engine and confidence. And more information, I thought. So we picked up a new cruising guide in Roatán, but found the Rio Dulce section hadn’t been updated.

Sergei, an old Rio hand, marked the route carefully. “Keep the sea buoy to port. You will have no water. You just go.”
“Just go?” I wondered. “When the depth meter shows no water?”
He nodded. “Gun the engine.”

That advice contradicted my most basic sailing rules: get the facts, know where you are and don’t act too quickly. Still, local knowledge usually proved more valuable than outdated guidebooks. Recent cruisers’ forums advised starting two hours before high tide to get a boost from the current. They also reported the sea buoy went missing the previous November. There was no point in worrying about missing buoys yet. I made a marina reservation and my crew purchased their tickets home, committing us to Guatemala.

JUST GO
Now, a mile from Livingston, the sea buoy bobbed in clear aqua water exactly as advertised. Our timing was right and it was time to go.
As we approached the buoy a boat sped toward us from the town. I waited to see what the driver wanted and it turned out the smiling Belizean occupant wanted to guide Hanalei in for $100.

I decided to try this without help and declined, adding, “How soon is high tide?”
He glanced at his bare wrist and shrugged. “Soon.”
I tried pointing to starboard of the sea buoy to get more information. “The channel is this way?”
“That way.” He gestured toward black-flagged fishing buoys to port. “Rain changed the river’s course.”
Another larger vessel pulled up on our port side. A grizzled Garifuna man pointed to starboard. “The channel is that way.”
“It has moved,” insisted the first.
“No. Other direction.” The second crew were older, their boat heavier.
Just go.

My head was pounding with confusion. Which way? What if the rains had piled up more silt and raised the bar? What if the river had carved a new channel? How was I supposed to know the right direction when locals disagreed? Were they deliberately confusing me? Completely distracted, I momentarily thought I should turn around and just go to Panama. With my confidence ebbing, it was now or never.

I put the engine in gear and thrust the throttle forward. Hanalei lumbered past the sea buoy to port, gathered speed and—just as I was thinking we were clear—plowed to a stop in a cloud of sand. I revved. Nothing. The Garifuna guy shook his head, bad luck. I put the boat in reverse. Nothing. The Belizean looked on as if to say, “told you so.” I revved again. My crew watched. Now what?

The Belizean said matter-of-factly, “Now we will pull you off. We take a long rope and tilt your boat. Two boats. Fifty dollars each.”

Full high tide was still an hour away. Assuming we had grounded at the shallowest spot, maybe another inch or two would lift us off. “We’ll wait and try again.”

I looked up procedures for vessels aground. Do not try to push forward. Do not reverse. Great. Wait for the tide to float you off. Try to decrease your draft.

We drank coffee and discussed our strategy. We had to take action before the tide started falling. So we waited until the tide was nearly full to try again. If that didn’t work, we’d pay the Belizean to help us, otherwise, we would waggle helplessly in the sand for the next six days.

PASSING THE BAR
A half-hour later I started the engine. Hanalei dug up more sand. The boat was too heavy to create enough momentum from a standing start.

The Belizean could decrease our draft by running a line from our mast a quarter mile away. Once the mast dipped low enough, the boat would heel, forcing the keel sideways and out of the sand. Unless the mast or rigging snapped.

He sped away to port while we watched anxiously. Hanalei’s mast tipped slightly and the Belizean’s outboard stalled. The mast righted, tugging him back toward us. He re-started the motor and roared off again.

The mast bent so low until I expected it to spring back and send the boat flying. I revved the engine as we heeled and this time felt the boat shift. We were moving.

With the crew waving wildly for him to return, I gunned the engine. The keel suddenly popped free. The depth meter still read zero. The mast righted and we were still moving. The man roared back with the halyard. The turbo engaged and my crew cheered as Hanalei plowed through the sand at two knots, the depth meter reading one inch, then five, and we were free.

RED TAPE
In Livingston I radioed the port captain who was supposed to meet the boat. No reply. As I readied my documents, I decided that the bar was impossible from a standing start. Pilotage instructions should have read, “Proceed at maximum speed toward the sea buoy.” The system needed fixing. Instead of placing the buoy at the edge of the sandbar, why not a half mile further out to sea? Why didn’t the government simply dredge the channel and buoy it? 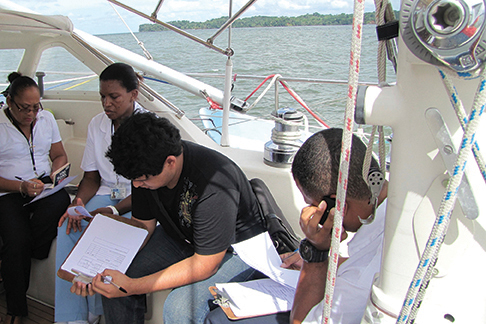 Through binoculars, Livingston looked tired and hot, just how I felt. Three hours later, when a boatful of health, immigration and customs officials, plus the port captain and an agent arrived, the obstacles to clearance began immediately. They needed more papers and fees were payable in Quetzals. I should change money and then find each office, but the bank would close soon. If I went into town someone should watch the dinghy. Anchoring out was not recommended; if we did, we should bring everything inside, even the fenders. The port captain informed me that my cruising permit would not be ready until tomorrow unless an agent represented me. Then it would only take an hour, which meant we could reach El Golfete before dusk.

Fuming, I forked over $170 and the contingent returned to Livingston to divide the proceeds. When the agent returned with a three-month cruising permit, I reminded him I needed six months.

No worries. Twice a month his boss, Raúl, drove to one of the marinas to facilitate $250 applications for one-year extensions. Captains would receive them before it was time to leave in December.

Why not a six-month visa in the first place? “Nobody leaves in the middle of hurricane season.” He smiled and shrugged. 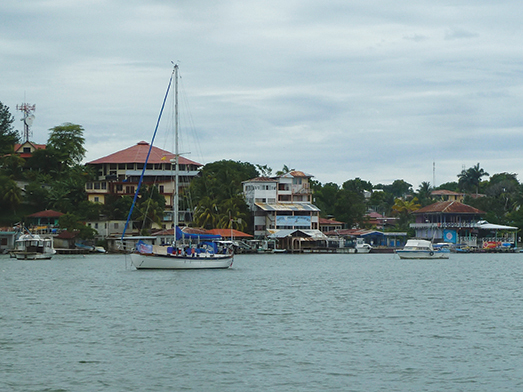 Reality finally dawned. Why make changes to this method of earning a living? In Livingston, the system was working fine. With the bar finally passed and our fees paid, we were now free to continue up river to put Hanalei to bed for hurricane season.