Match your batteries to your needs and budget  (published November 2016)

Among the cruising fleet of sailors, the topic of onboard energy is a constant staple of cocktail conversation. Every boat has energy issues and every skipper has his or her own priorities and ways of making do. At the heart of the matter lies your battery bank. Here’s how to size that bank and how to select the type of batteries you want to use.

Modern cruising boats have so many electrical gadgets aboard that the daily energy use can be pretty staggering. In order to know how large a battery bank you will need to satisfy your energy needs, you need to know how much you use—in terms of amps—while at anchor and on passage. Remember that you use up to 40 percent more electricity in a 24 hour period when on passage because the sailing instruments, autopilot night lights and running lights are all on.

Lights and some electronics are rated in watts. But you need amps for your audit because batteries are rated in amp-hours of capacity, so you will need to convert watts by dividing the wattage by 12 (volts). A 60 watt bulb uses five amps per hour. If left on for four hours that translates into 20 amp hours. Laptop computers, the autopilot, incandescent lights, refrigeration, an HF radio and anything that runs off an inverter will be the largest energy consumers. 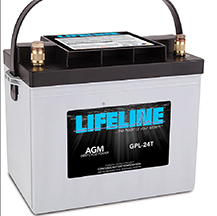 You will have one battery that is used only for starting the engine and that should not be included in the calculation of how large a bank you need. As a rule of thumb, batteries should not be run down below 50 percent of their capacity before being recharged. For the longest lifespan, experts suggest that you should reduce that usage to 25 percent, but that is often impractical.

A boat that uses 200 amp hours of electricity daily should have at least 400 amp/hours of capacity in the bank and 800 would be better. That’s a lot of batteries. An 8D battery that has 245 amp-hours of storage weights about 150 pounds and you would need three of them to get close to the 800 amp hour level. Group 4D batteries weigh 130 pounds and offer 200 amp hours of storage. If you use Group 31 batteries that weigh only 70 pounds, which a strong person can lift, and have about 100 amp hours of capacity, you would need eight batteries to meet the optimum bank size.

The final size of the bank will be a compromise between the space available aboard your boat, your budget and your plans for active and passive charging systems. 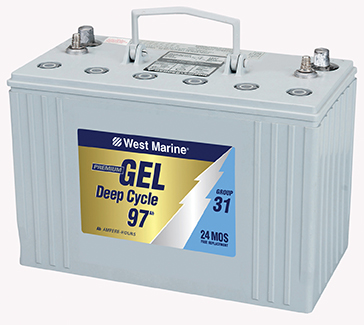 There are four types of batteries to choose from and each has its pros and cons. Traditional wet cell batteries such as those made by Surrette/Rolls have long been considered the top of the line for their high voltage charging capacity and long life. They do require some regular maintenance and they do not like being fully discharged. But if you look after them, they will last for many years.

Sealed batteries have gained in popularity. Gel cells are the most widely used and are the least expensive. Gel cells do not take a high voltage charge so you have to set your regulator to 13.8 volts, which in turn means the batteries charge more slowly. West Marine offers a good selection of gel cell batteries for those on a budget.

AGM batteries, such as those manufactured by Lifeline in California, incorporate the benefits of a no-maintenance gel cell with a higher voltage acceptance and more rapid charging capability. AGMs can be mounted upright or on their sides (but not upside down) so they are particularly suited to tight installations on boats that heel and rock—like all monohulls. AGMs have a lower self-discharge rate than flooded or gel cell batteries and can have as long a life as a high quality wet cell battery.

For those for whom weight is more important than cost, such as the owners of light displacement multihulls, the battery of choice could be modern lithium ion batteries. While lithium ion batteries have had issues with overheating and starting fires —on boats as well as in phones and laptops—today’s technology, led by companies like Mastervolt, has eliminated most of that risk. A lithium ion battery weighs less than half of the weight of a gel cell or AGM battery of equivalent capacity and less than a third of the weight of a wet cell battery. But, they do cost three to four times as much as the other sealed batteries. 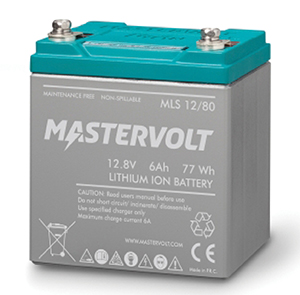 A battery bank will age with time and use. For example, an inexpensive Group 31 gel cell is rated at 300 cycles which really means 600 cycles if you do not discharge below 50 percent. More expensive AGMs will give you 400 basic cycles or 800 at half discharge. So, you will be looking at replacing your batteries at a predictable time in the future, usually between two and five years of regular, active use.

But batteries sometimes go bad and one poor battery in a bank that is wired together will bring down the capacity of the whole bank. While the best solution to this problem is to replace the whole bank, you can in fact just replace the damaged battery as long as you use a battery of the same type and model. Don’t mix battery types—particularly wet cells with gels or AGMs—since they have very different charging and discharging characteristics.

If you are building a battery bank from scratch and expect to live aboard or cruise extensively and for many years, consider a 600 to 800 amp-hour, 12 volt bank made up of high capacity six volt AGM or wet cell batteries wired in series.