In the early 1980s a 25-year-old American named James Baldwin sailed alone around the world in his 28-foot yacht. In his book, Across Oceans and Islands, he wrote, “The sea, especially in its moments of fury, demands first your attention, then your endurance, and finally your patience and acceptance. If you lack this capacity, the sea will soon find you out and make it known to you that the shore is where you should make your home.”

Too late, I read Baldwin’s comment one week into our 12-month sailing adventure from New Zealand to Ireland. By that stage, the sea had my full attention and was demanding more and more endurance (read bumps, bruises and tears) by the minute. Forget about patience and acceptance, the sea had already found me out and made it quite clear that I was very far from home. 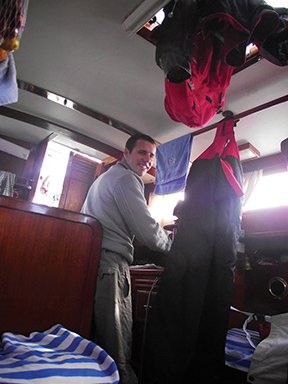 TAKING THE ROAD LESS TRAVELED
When planning our voyage, we considered sailing the traditional route from New Zealand to Europe; west along the top of Australia, across the Indian Ocean and around the Cape of Good Hope. But sailing the less popular eastern route; upwind to French Polynesia, on to Panama and across the Atlantic, held more appeal. We had already traveled most of Asia and weren’t keen on up-close-and-personal encounters with Somali pirates. We wouldn’t meet as many boats going east and it would involve long stretches of time at sea, but we were young, optimistic and up for a challenge.

Our first destination was Tahiti, 2,500 miles from Auckland. It would be our first ocean-going passage aboard Ashling and in no small part would determine the success or failure of our plan for the year ahead. Our route would take us due east for 1,800 miles along 30 to 35 degees south, only turning north when we were directly beneath Tahiti at 155 degrees west. Jimmy Cornell describes this route as a “tough windward passage” with “everyone reporting at least one gale along the way.” Not a walk in the park then. 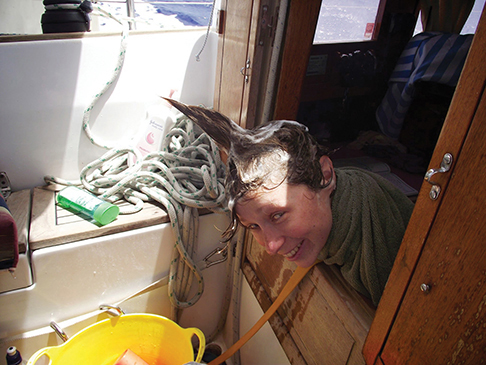 And sure enough, from day one, we were thrown right into the thick of it with 25 to 35 knot winds and large following seas. Ashling was loving it and making great progress—we averaged 150 miles a day compared to our expected 100. However, it was a tough start for the crew. We were already exhausted from the final weeks of preparation and had hoped for a quiet few days to get our bodies used to life on the water. No such luck. The irony of Ashling’s model—an Endurance—was not lost on us as we realized that she had what it takes to handle these ocean passages but after a long week of intense sailing conditions, we wondered, did we? 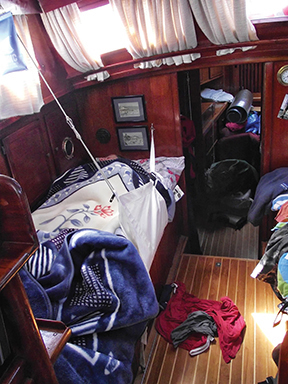 MIND OVER MATTER
While the conditions remained arduous for most of our passage, life did get easier as we established a routine and our bodies acclimatized. At the start of every four-hour watch, we would set ourselves one task to complete: I will wash my hair; I will make a meal; I will write in my diary; I will plug that leak; I will mop up that water. And every evening after dinner we would squeeze into a single bunk. There, we hugged each other as much for body heat as for comfort while listening to an audio book and escaping into a world of fiction that was far away from the constant rocking and rolling of the South Pacific.

Small achievements made a large difference. Like when we crossed the International Dateline. Or when we discovered we could fit our current position and our destination, Tahiti, on the same screen when we zoomed out on our chartplotter. The highlight of every day was when we turned on our satellite phone to receive news from friends and family. Their encouraging emails and text messages boosted our morale, bolstered our confidence and gave us a renewed energy to keep going.

There were still surprises, like the wave from astern that filled the cockpit and drenched the first mate who was standing at the helm. Down below, the skipper assessed the damage made by a pot of oats that had catapulted from the stove across the cabin and now covered the chart table and communications equipment. But getting our bodies into a routine meant that the physical obstacles became less of a challenge. Forcing ourselves to complete a task on each watch meant that we were moving around more, however difficult it was, and momentarily distracting our minds from the discomfort of the present. 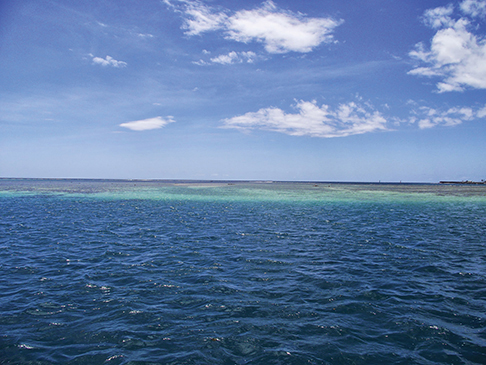 Nous sommes arrivés!
Finally after 2,750 miles and 23 days at sea, we arrived at Tahiti. We were apprehensive entering the harbor as we would be navigating our first ever reef pass. And if that wasn’t enough, we had read conflicting versions about where to dock and who to contact. Then top that with our struggle to resurrect our rusty language skills to communicate on the VHF radio in French. Hearts in our mouths, we crept past the navigation aids, stumbled through a VHF conversation with a patient and understanding port official, and docked safe and sound at Quai des Yachts in downtown Papeete. 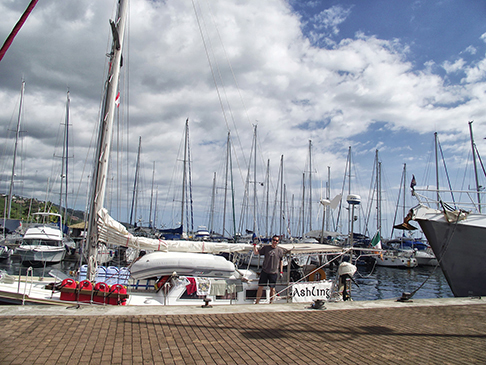 All the tourist guides describe Papeete as underwhelming and “just another city” where tourists should spend as little time as possible. That may be so for people who arrive here by plane but for us, after three weeks of surviving in the South Pacific, Papeete meant dry land and it felt amazing! We swung off the boat and land life hit us all at once in an assault of our senses: colors of flowers, cars, shops; smells of land, food, people; sounds of traffic, birds, laughter. 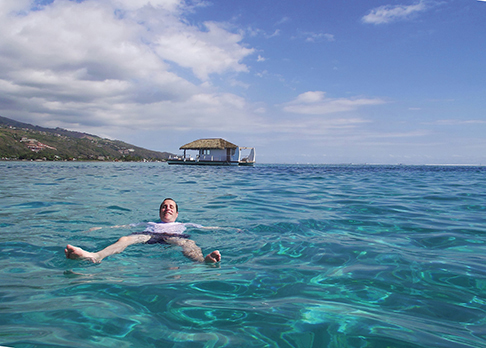 GOOD ENOUGH FOR CAPTAIN COOK
After a few days of recovery and repairs in Papeete, we set off to explore the neighboring island of Moorea. We anchored in Cook’s Bay, where the famous Captain himself landed in the 18th century, just before nightfall as a Polynesian drum performance started up at the nearby Club Bali Hai hotel, almost as if to welcome us to the island. 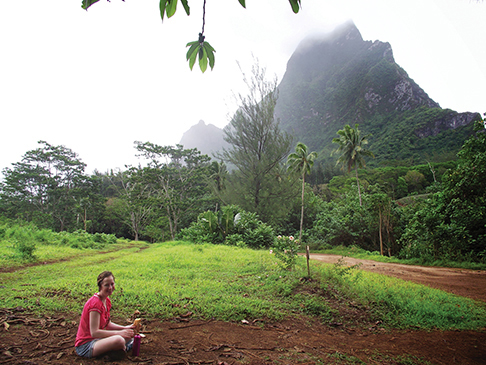 Many tourists rent scooters or cars to reach one of the island’s main attractions, the Belvedere lookout over Cook’s Bay and Oponuhu Bay. Not our first mate. Apparently we had been “lazying around” for three weeks at sea and needed to stretch our legs so we went by foot, uphill for four hours. Along the way we stopped at archaeological sites, including a marae dating back to AD900. 4,000km from New Zealand, it was quite comforting to see the familiar structures and customs that the original Polynesians introduced as they settled around the Pacific. 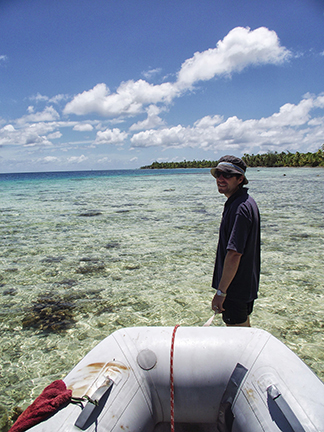 ONWARDS AND UPWARDS
We returned to Marina Taina in Papeete to refill fuel, water, gas and provision for our next passage to the Tuamotus. The route was straightforward—leave Papeete, take a right and head northeast. Three independent weather sources forecasted the wind to be an east-southeast 10-15 knots; perfect sailing conditions for Ashling and a nice way for us to ease ourselves back into it. We were in for a surprise.

After rounding the corner from Papeete Harbour we ran straight into our old familiar friend, the 20 knot wind, gusting to 25 knots. We initially thought it was convergence effect from local wind coming over Tahiti but after two hours, it was still going strong with waves splashing into the cockpit every few minutes. For the hundredth time, we regretted not installing a spray dodger before leaving Auckland. We also had a few choice words about the reliability of weather forecasts for French Polynesia.

We had planned to stop along the way at Rangiroa Island, the second largest atoll and lagoon in the world, but our three attempts over 12 hours were scuppered by strong winds and currents pushing us in the opposite direction to the lagoon entrance. Our second attempt at landfall in the Tuamotus was more successful as we diverted slightly off our course to the island of Manihi. 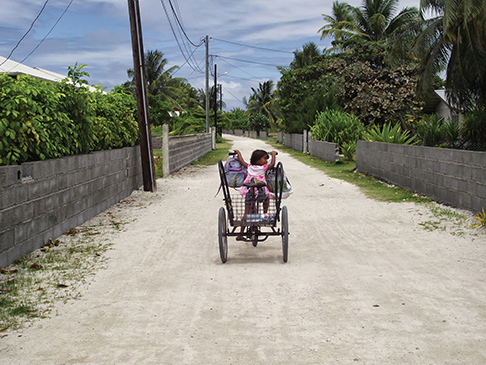 PARADISE FOUND
The Tuamotu islands are coral atolls; circles of land created by underwater volcanos. Historically these islands were known as the “Dangerous Archipelago” due to the many shipwrecks in the area. The islands are so low that they do not appear until you are almost on top of them. It’s quite unnerving really because you can see it on the chart, you know it’s there, but there’s no sign of land. Then, suddenly, a few palm trees appear on the horizon and there it is—an island! Thanks to GPS, Jimmy Cornell, Charlie’s Charts and anecdotes from many brave sailors over the years, cruising in the area is now more enjoyable, much safer and easier on the blood pressure. 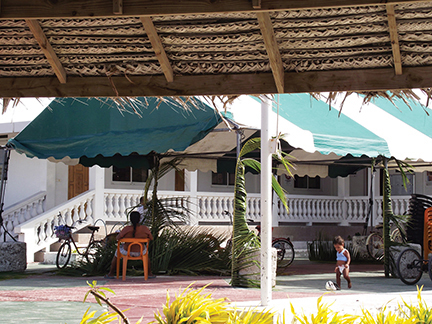 The small population of Manihi is based mainly in the tiny village of Pauea, which consists of two shops, a bakery, a town hall, a primary school and a church. The locals put a lot of effort into keeping the village neat, clean and organized with recycling collection points, colorful flowers and shrubs, and the whitewashed walls of well-kept houses. While the island is by no means wealthy, we got the impression that people in Manihi have enough to get by and take pride in working together to make their island a better place to live.

Chatting to a local lady at the bakery, we learned that the past thirty years have been very good on Manihi due to the black pearl industry, which began in the late 1960s, and the opening of a hotel resort on the island. At one time there was a daily flight from Tahiti to Manihi. Today, the island’s pearl farms have shut down and the island’s hotel closed in October. There is just one flight to Tahiti every three days and many of the locals are moving to other islands to find work. It was sad to hear this but she seemed quite stoic, saying “Don’t worry, something else will come along, it always does.”

Manihi is just like those exotic desert islands you see on postcards, with palm trees bending over white coral beaches and clear water gradually turning to light blue and turquoise. On the ocean side of the land, an orange plateau extends from the white coral beach for a few hundred feet before dropping off suddenly into the Pacific Ocean. The scenery would take your breath away in any part of the world and seemed even more impressive when we thought about where we were, on a tiny island in the middle of nowhere within a huge ocean. 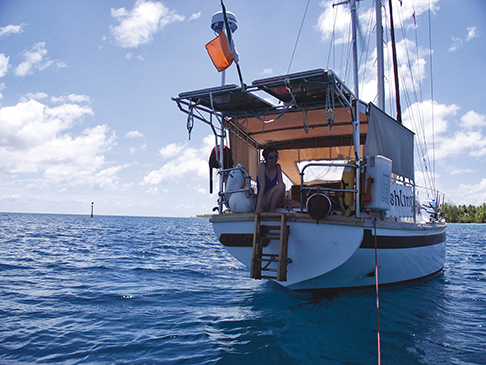 By opting to forgo the traditional route west towards Europe, our adventure east was a challenge but well worth the bumps, bruises and tears. Young James Baldwin was right, the sea does demand attention, endurance, patience and acceptance, but if you can handle all that, your reward will be sweet.

Eithne Sweeney and her husband Myles took the route less traveled by sailing east from New Zealand in their Endurance 35 Ashling.

View all posts by Eithne Sweeney