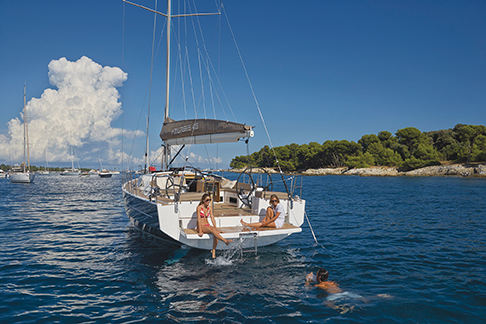 The new, twin-rudder, racer-cruiser from Turkish builder Sirena has roots in the world of Open Class racing by George Day originally published in BWS.

If you follow the Volvo Ocean Race or pay attention to the world of Open class racing in boats like Class 40s, Mini 6.5s or Open 60s, then you will know that the fastest designs out there today have narrow, plumb bows, very wide transoms, bulbed fin keels and twin rudders. These boats have skimming dish hulls and are able to plane at high speeds when power reaching in a good breeze.

What do the concepts behind these racing machines have to do with cruising boats, you may ask? In our view, quite a lot. If you can make a cruising boat better balanced, faster and roomy in both the cockpit and down below, you have improved the whole experience. Traditionalists will shy away from the modern look and thrilling performance of boats like the Azuree 46. That’s fine. There are plenty of sailors who are looking to cruise in comfort, race competitively and make extremely fast passages. Boats like the Azuree 46 are for them.

Since the Rob Humphries designed-Azuree 46 is billed as a true dual purpose boat, it only made sense to have our test sail take place during the Tuesday night fleet race on Narragansett Bay, Rhode Island. This is weekly beer-can racing but it is quite competitive. There were about 40 boats out the night we sailed the 46 and fully a third of them were pure racing machines or tricked out racer-cruisers. Lots of the boats had laminated sails and most had full crews.

We had just five aboard for the race, Alan and Sarah Baines, Greg Ferguson, Eric Archer and myself. Between us we probably had 150 years of sailing experience. In fact, Greg has sailed as a pro in years past. He was going to call tactics. Also, the 46 is endowed with massive cockpit winches, two of which were electric. And it has cabin top winches that also include one electric model. We weren’t going to be doing a lot of grinding nor were we going to be flying a spinnaker since we were in the cruising division.

The race was a windward-leeward course with roughly one-mile legs and twice around. We were the scratch boat in our class so we knew we had to win by a pretty good margin. We got off to a good start in traffic and were able to use raw boat speed to sail through the fleet and into clear air. Once ahead, we had to put the pedal down to sail as high and fast as possible. The first leg required only one tack as we kept getting lifted as we beat to the windward mark. Those below us were not so fortunate.

The 46 has a tall rig, a large fully battened mainsail and a smaller slightly overlapping, 110 percent jib. Trimmed tight and with the traveler to windward, we sailed upwind at about 28 degrees to the apparent wind and made six and half to seven knots in the 10 knots of breeze. With twin rudders and a deep bulb on the high aspect fin keel, the boat had a lot of stability and tracked beautifully. The helms were light and sitting either to leeward or to windward offered excellent views of the sails and the course ahead.

The main sheet is double ended so it can be trimmed from both sides of the cockpit and is in reach of the helmsman who can use the electric winches to grind in the sails. The sailing instruments are mounted on flat panels on the aft end of the coaming at both helms so they are always in view. The chartplotter or multifunction display is mounted under the aft end of the large cockpit table. 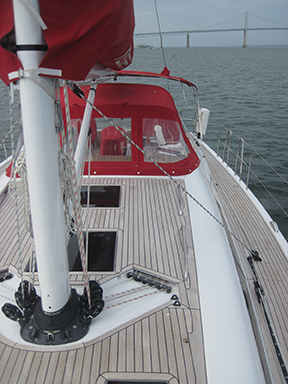 We rounded the windward mark well ahead of the next boat and then ran down to the leeward mark wing and wing with Eric using the boat hook as a whisker pole. The second windward leg was similar to the first and we had to tack only twice to fetch the layline. Running toward the finish we were well ahead but we owed the boats behind us plenty of time and we were concerned we didn’t have enough minutes in the can to win on corrected time. Such is the life of PHRF sailors that we finished first in the 12 boat class by three and half minutes but ended up eighth. According to designer Rob Humphries, the hull and rig design have been optimized to rate well under the IRC and ORC rating rules.

The 46 acquitted herself very well around the buoys. She is fast, nimble and the cockpit is very well laid out for sheet handing and sail trim. The sail plan is powerful and with downwind sails she will fly. I think the 46 will really shine in longer point to point events and, of course, when making coastal and offshore cruising runs.

While the 46’s sailing performance and cockpit layout were impressive as we banged around the buoys, the boat is also a true luxury sailing yacht. For example, the bench seats in the cockpit where you kneel to trim sheets, have a pure spa mode since they fold out to become wide lounging and sunning beds. And, in the cockpit, the large table with folding leaves will seat up to eight for open air meals. The transom folds down to make a wide stern swim platform and place to shower after water sports. With the stern platform down, the 46’s cockpit is larger than you will find on most modern cruising boats. The cockpit of the 46 we sailed was fitted with teak floors and trim which gave it a pleasant traditional yacht style.

Down below, the designers at Sirena have made excellent use of the hull’s large volume. A three-cabin layout, the boat has a large master suite forward with a double V-berth. There is a large hanging locker, cabinet space, drawers under the bed and a bench settee on the starboard side. 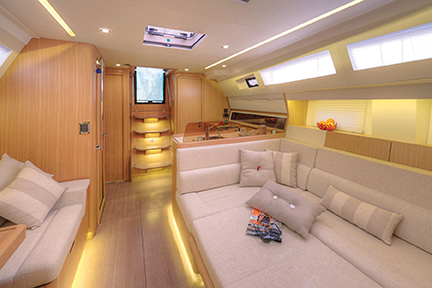 The master head is to port and has a large area that can be closed off with glass panels to make a shower stall.

The twin quarter cabins are spacious due to the beam and hull volume aft. The bunks are truly doubles and there is plenty of headroom. Large hanging lockers and cabinets provide plenty of space for guests to stow their clothing and cruising gear.

The after head is to starboard and next to the companionway. This will be the “day” head and a good wet locker for damp foul weather gear in rainy conditions. It too has a shower.

The saloon has the huge U-shaped dinette to port that will seat five. With the table unfolded you can add three more crew to the dinner list for a total of eight. The dinette table can be lowered to transform the dinette into a large double berth.

The settee to starboard has the chart table built in. The center segment of the dinette rises and lowers. In the down position, the settee is one long bench. With the table raised, and cushion removed, it becomes a nav station with a compartment for a laptop and other nav aids. Radios, a chartplotter and other instruments can be mounted outboard of the table. 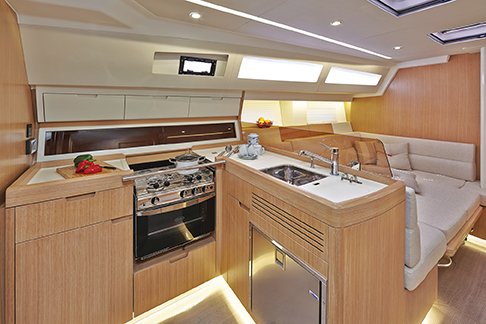 The galley to port has two fridge units—one top loading and one a drawer—a three burner stove, and double stainless steel sinks. There is tons of storage outboard of the galley and under the counters.

The boat we sailed had oak colored floor panels made from synthetic Alpi wood that looked remarkably real but is stain and scratch resistant. The joinery throughout the boat was of solid oak trim with handsome oak veneers on the cabinets and bulkheads. With hull ports and large overhead hatches, the saloon was bright, warm and elegant.

Over the last two decades, Turkey has emerged as a leading builder of fine yachts, both power and sail. With an ancient maritime history and boat building traditions, the quality that goes into the boats built by Sirena Marine is second to none. The company is a subsidiary of Turkey’s largest conglomerate and their intention is to build modern dual-purpose yachts without compromise.

From the oversized and securely backed keel bolts to the intelligently laid out electrical panel, to the integrity of the infused laminates in the hull and deck, the new Azuree 46 is built to the highest standards.

Her design has a unique pedigree that combines some of the performance aspects that Humphries draws into this Open class race boats with the attention to live-aboard details—generator and air conditioning—that make the boat an elegant and comfortable floating home.

And, in the vernacular of modern Euro-styling, derived to some degree from the look of Open class boats, the Azuree 46 is strikingly good looking and will give those who appreciate her style and performance many years of sailing pleasure.