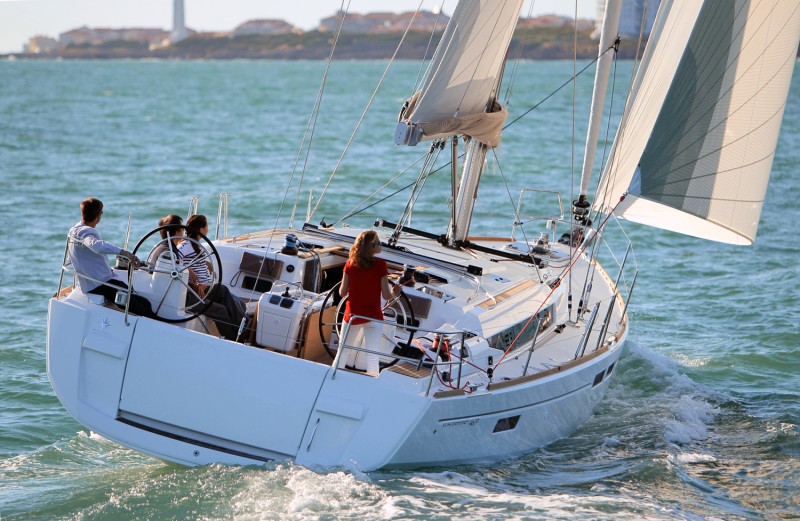 Last February, after the Miami Strictly Sail boat show at Miamarina, we had a chance to spend a couple of hours sailing the new Sun Odyssey 469 that had been introduced at the show in the tropical waters off Miami Beach. We joined Jeanneau America’s President Paul Fenn and Erik Stromberg, Jeanneau’s Sailboat Product Manager, at the Miami Beach Marina and when we got underway we fired up the 75 horsepower Yanmar and motored smartly out through Government Cut to the open ocean.

For complete disclosure right up front, my wife Rosie and I own half shares in a Jeanneau 45.2 that we have put a few miles on and come to know and like very much. So, it was with some anticipation that I got a chance to sail this modern sistership, which is very much like a new generation of the same family.

As we motored seaward, we unrolled the in-mast furling mainsail and then as we cleared the sea buoy we fell off and unrolled the 106 percent jib. Hard on the wind, the 469 chewed steadily and quickly into the 18 knots of true breeze; we were making seven knots through the water so the apparent wind on deck was around 25, yet we did not feel the need to reef. The boat stood up well to the breeze and handled the three foot waves without a fuss. In the cockpit, we were staying perfectly dry. 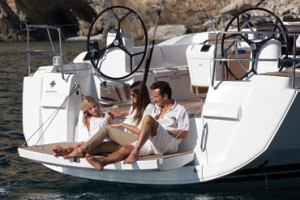 The 469 has several combinations of rig and keel design. For those who will be racing or entering offshore events, you can have a full 140 percent genoa on roller furling and a seven foot fin keel. For those who do not want to trim sails or go offshore, you can have the boat with a self-tacking jib that is fitted with a track on the cabin top before the mast and a five and a half foot shoal fin keel.

Or, you can opt for the 106 percent headsail that is designed to work with some interesting new technology involving self-tacking winches and smart autopilots that Jeanneau is developing with partners. At this point, the optimum sail size for the system is a small slightly overlapping jib.

We didn’t have the new self-tacking system aboard but that made little difference since the boat is so easy to tack and re-trim. We threw the 469 through a few tacks in the bouncy seas and found that she held her own and came through the tacks without stalling or pitching. In these conditions, the boat likes to sail at 45 to 48 degrees from the true wind and will settle in at seven and half knots comfortably.

After sailing her upwind, we started to fall off onto a close reach and then a beam reach and watched with pleasure as the speedo climbed to eight, nine and then 10 knots in the surges. The boat has twin wheels and from both the steering was positive and quick and we felt no play in the cables, even though the boat was new.

Designed by French naval architect Philippe Briand, the 469 has a long pedigree that flows from Briand’s work designing large custom yachts and Jeanneau’s long experience building family cruising boats. This is a very good marriage of skills and experience so the basic boat, the hull, keel, rudder and rig, are simple, powerful and created to enhance fast, safe and comfortable shorthanded sailing.

Sailing the 469 that day in the boisterous conditions off Miami Beach, there was no question in our minds that the new boat meets those exacting criteria very well.

STYLE & COMFORT
In the early 1990s, when we spent the better part of the Med winter living aboard our Mason 43 Clover in a marina in Palma Majorca, Spain, we lay across the finger pier from an early Jeanneau 44. We coveted the boat’s swim platform aft, marveled at the huge cockpit with a table for six and envied its interior volume. So, a seed was planted early. Then, when it came time to buy another cruising boat, opting for a well equipped 45.2 was a very easy choice.

The 469 carries the genes of that early 44 and of our 45.2. It has clean hull lines with a fairly narrow entry and a lot of beam aft; this certainly adds to the internal volume for the after cabins and lockers but also adds some stiffness when reaching in a breeze. It has an utterly simple rig that is powerful enough for fast, fun cruising runs or passages. And, it has the accommodations that make it a comfortable live aboard home for a couple or a family of four.

The modern styling of the 469 is very Euro-modern with a low slung cabin top, squared off edges and rectangular, tinted cabin windows. The hatches on deck are fitted flush into the deck and the fixed ports in the topsides are also fitted flush with the hull. The look is clean, simple and elegant.

The cockpit is the outdoor living space with comfortable bench seats, a drop leaf table for six people, and a drop transom that is a great platform for landing a dinghy or swimming. 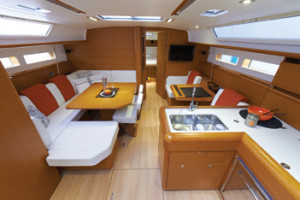 Down below, the emphasis in the design falls on making the most of the hull’s volume without creating cramped or dark spaces. Light Alpi veneers on the bulkheads, pale wood flooring, white overheads and pale fabrics all combine to give the interior of the 469 a sense of brightness and warmth. 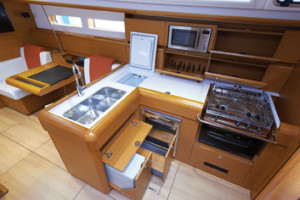 e to port has two stools that add seats amidships so six can eat around the table. To starboard there is a bench settee with a nifty folding section in the middle that transforms into a table between the end seats. This can be a nav or computer table or a great place to play cards or board games. The utility panel is above the table and presumably radios, phone and repeaters can be installed here, too.

The main difference in the Med-style layout is the addition of a third head, the galley along the starboard side and a larger dinette with a fixed bench amidships. The charter version has four cabins and four heads and the same galley-dinette set up as the Med-style layout. 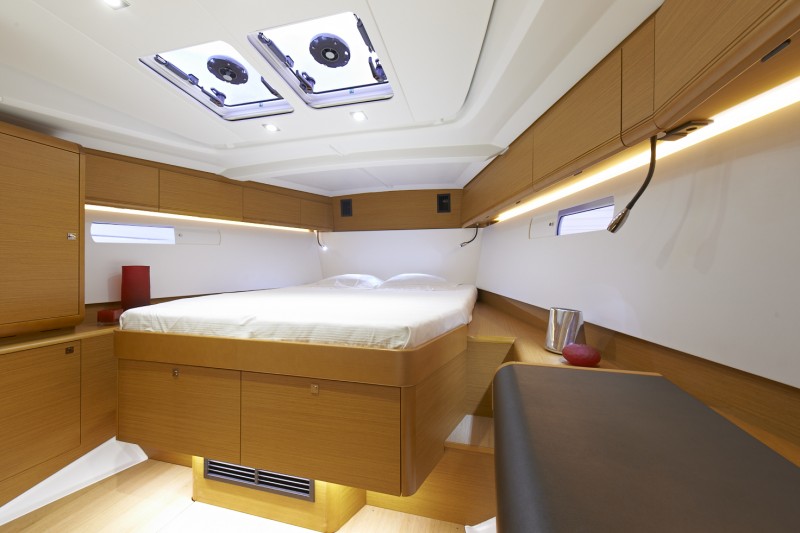 The forward cabin in the boat we sailed was a spacious owner’s suite with a centerline double bed on a pedestal that is easy to get in and out of and easy to make up. Under the bunk there are large drawers and forward there are ample storage spaces on either side of the water tank. A small vanity table is built in to starboard and the hanging lockers are to port. With three opening deck hatches and a fourth in the head, ventilation in this cabin is excellent.

The two quarter cabins have large double bunks, good storage lockers and large hanging lockers. These are comfortable and cozy cabins that are particularly good sea-going cabins with good ventilation via the overhead deck hatch and the side port that opens into the cockpit.

Both of the heads on the boat we sailed had separate shower stalls, which is a very welcome feature for those living aboard and cruising with friends or family. The head units are white molded fiberglass that are easy to clean and keep tidy.

Over the years, the way Jeanneaus have been built has evolved as production techniques and materials have been introduced. Yet, the 469 still has the feel of a hand crafted yacht in which the care of craftsmen still dictates the structure and finish of every detail.

BWS THOUGHTS
Compared to the 44 we first saw in Spain or our 45.2, the new 469 is a more modern and stylish descendant, as it should be. Gone is the large chart table of old and in its place are panels at the helms for chartplotters and a table in the saloon for your laptop. And this switch seems indicative of how we have evolved as sailors.

The new 469, with its 106 percent jib and the potential of a new self-tacking winch and autopilot system, is all about comfort, easy sailing and fun. The simple rig with all lines led aft through conduits to the cockpit and an electric winch is powerful enough for true sailors to enjoy yet it will never intimidate new sailors.

The boat’s construction is robust but modern and durable. The hull is solid fiberglass with vinylester outer resins. The deck is a unique infused molding that has a very fine finish on both sides and is stiff and light. The hull to deck joint is fitted with the most advanced adhesives and fasteners.

The living accommodations below are the fruit of many thousands of cruising boats that have gone before it, including mine. Jeanneau has innovated until they found layouts that really work both at the dock and at sea, and then have kept improving them. The 469 has a long pedigree of successful cruising boats behind it that informs every detail from stem to stern and from keel to masthead.

This is a boat that a couple can sail anywhere either alone or with family and friends in comfort and style.