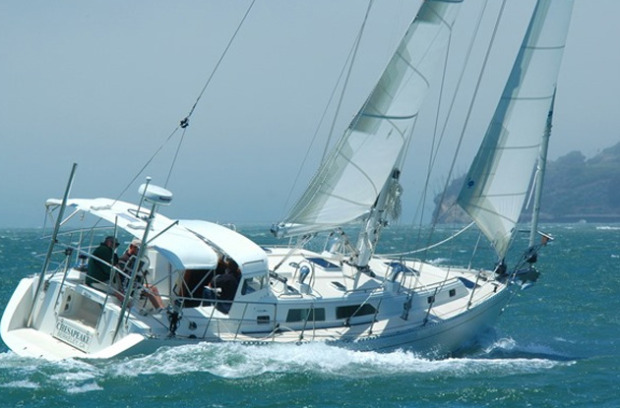 After being dropped ashore by dinghy, I paused on the seawall to make sure I hadn’t forgotten anything aboard, then looked back at the Outbound 46 sitting at anchor and gave a nostalgic wave to the crew in the cockpit. We’d just finished a fun few hours of sailing on the Chesapeake Bay and I don’t think anyone wanted it to end. I sure didn’t. And I was envious of the boat’s owners, who would soon venture into blue water on their way to the Caribbean with the Salty Dawg Rally.

Our sail was just after the 2014 Annapolis sailboat show in October and we had found a perfect fall day to get the Outbound out for a gallop around the bay. When I stepped aboard the 46 there were three couples in the cockpit along with Phil Lambert from Outbound Yachts. Interestingly, one of the couples owned the boat and the other two were Outbound buyers who’s boats were in various stages of the build process, so it was fun to sail with them and to gain insights into why they had chosen the boat. 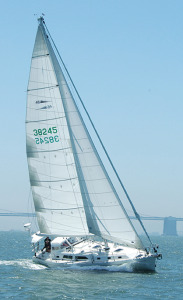 The original brain trust behind the Outbound 46—which was initially cast, and can still be had, as the Outbound 44—was Phil Lambert and Craig Chamberlain, who tabbed the late Carl Schumacher to do the design work. Entering the cruising market in 1999, the concept of the original 44 was to create a boat that would combine performance with true offshore capability and cruising comfort. To achieve this, they went with a long waterline, high righting moment, moderate beam, efficient rig and attention to weight distribution. And by all accounts, the Outbound team hit the mark by building a boat that would end up being well behaved and comfortable at sea and a pleasure to liveaboard.

Also, by showing a willingness to evolve and tweak the original design as necessary, the Outbound team has been able to dial the 46 into what is now a well refined boat that meets the discerning needs of their customer base. As Lambert puts it, “The story with Outbound is that it has been going strong since 1999. Experienced offshore sailors recognize and appreciate the importance of stowage, tankage, comfort and performance—all in a very forgiving hull.”

And though the Outbound 46 isn’t necessarily a “custom” boat, the company has proven adept at valuing customer input, which has led to some practical modifications to the initial design. While Outbound can still build the 44, they started building the 46 with hull number nine when the owner wanted to double the size of the swim step. Then in 2012 they adjusted the interior arrangement to offer more space for electronics at the chart table and a larger stall shower near the companionway.

For my test sail I literally hopped off a similar sized, but much different, boat onto the 46 while out on the bay. Greeted by Phil and a gracious group of excited sailors, we raised the mainsail out of the LeisureFurl boom, rolled out the Solent jib and sheeted on for close hauled. 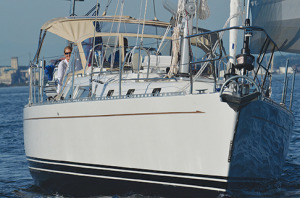 The wind was blowing at a steady 20 knots so going with the smaller headsail was the correct call and our speed instantly jumped into the low sevens as we pushed our way through the chop. Sailing at about 35 degrees to the apparent wind, I sat to leeward of the large wheel and steered with little effort. With the boat well balanced, the helm had just the right amount of weather to it as I made minor adjustments to keep the tell tales flowing.

As we tacked our way farther out into the bay, the waves kicked up slightly and the feeling of the helm didn’t change. The boat felt stiff, yet forgiving underneath us and as we talked about the owner’s impending trip offshore to the Caribbean, I got the impression that this boat would treat them well.

After sailing upwind for a bit we cracked off to go through the various reaches and switched out the Solent for the larger genoa. Our speed stayed up in the sevens and we toppled the eight-knot mark while on a beam reach. I relinquished the helm at this point so some of the other crewmembers could take a turn and everyone had glowing remarks as to how the boat handled—apparently much better than the previous boats they had owned.

When it was time to head for the anchorage in Spa Creek, the owner took the wheel and fired up the 75hp Yanmar. I wasn’t offered the helm, and didn’t necessarily need it, but could tell that she handled well and was easy to control as we lowered the main, made our way into Annapolis Harbor, waited for the Eastport Bridge and then anchored snuggly in Acton Cove. With that amount of maneuvering in tight quarters, it didn’t seem to present any challenges for the skipper.

One of the features I noticed first when climbing aboard for my test sail was the height of the lifelines. They are 30-inches tall, which in my mind should be the standard for offshore work. When moving forward or aft they provide a solid handhold, but are also tall enough to lean against without feeling as though you’ll fall overboard.

The hull is solid 100 percent hand-laid fiberglass and the deck is vacuum bagged Divinycell polymer foam cored for maximum rigidity that felt firm underfoot. It seems as though Outbound is one of the few boat builders that still employs a stainless steel toe rail and I am a huge fan of its utility and lack of maintenance.

Standard on the bow is a double anchor roller with a sturdy Lewmar V-4 captsan windlass with 200 feet of high-test chain. Just aft of the windlass is a large standup locker/storage area that can house downwind sails, fenders, dock lines and more.

The side decks are wide and uncluttered as you move aft to the cockpit and stainless steel handholds run the length of the cabin top.

The cockpit is a classic T-shape that is designed to seat six comfortably, though we had seven without a fuss. The benches are long enough to stretch out on and padeyes are affixed nearby for tethers. With today’s penchant for large open cockpits with double wheels and big tables in the middle, it’s nice to see Outbound sticking with a tried and true offshore cockpit.

Winches are placed on the cabin top to port and starboard of the companionway for control lines, halyards and the mainsheet. And two primary winches are aft near the destroyer wheel for the genoa and jib sheets.

As is the theme throughout, the cockpit has functional storage spaces for a life raft, propane tanks and lines. And the starboard settee lifts up to reveal the work/storage room below and gives you standing headroom while working.

The walkthrough stern allows for quick access to the large stern platform that makes it easy to get in and out of the water or dinghy and gives you plenty of room for a stern shower.

Knowing that I would be doing my test sail by jumping from boat to boat while on the water, I made it a point to stop by and see the Outbound 46 while at the show. When going below I was immediately struck by the craftsmanship and sheer beauty of the wood and joinery. The raised saloon emits quite a bit of light to offset the wood and handholds are seamlessly fitted into the interior. And though they weren’t open, there seemed to be a sufficient amount of hatches and ports to ventilate each space in the boat. 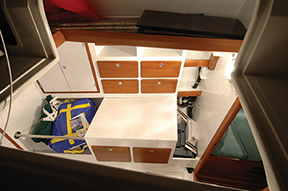 Below the companionway steps to port is a spacious, J-shaped galley with a double sink, three-burner stove, dual refrigerator box and ample counter and storage space. Actually, storage space abounds throughout the interior. The large tanks (200 gallons water, 190 gallons fuel) are centered over the keel and under the floorboards, which frees up space under bunks and settees to stow gear, clothes and other essentials.

Aft to port behind the galley is a quarter berth. There is standing headroom at the head of the bunk and two drawers pull out from underneath. A hanging locker will take your foulies, and cupboards next to and above the foot of the bed will house more clothing. For ventilation, there are three opening stainless steel ports.

The Yanmar diesel is found underneath the companionway and the steps rise up on gas struts. From my quick look, it seemed as though you could access all the engine essentials quickly, and major repairs wouldn’t be too much of a fuss.

Across from the galley to starboard is a proper navigation station with a desk big enough for chartbooks and a laptop, and plenty of room above and to the side for communications equipment and a multifunction display. This is also where the boat’s electrical panel is located. 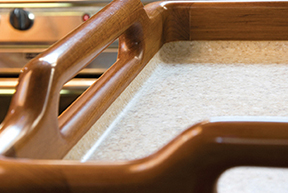 Immediately aft of the nav station is a head with a large dedicated stall shower that was added in 2012 and can double as a wet locker. Even further aft from the shower stall is quite possibly one of the most unique features on the boat, a dedicated workroom. Accessible from the cockpit as well, this utility area houses a workbench with draws and storage bins, and can also include a washer-dryer.

The main saloon has a U-shaped settee to port with a large drop-leaf table and room to seat four to six. To starboard is a long bench settee that would make a good sea berth and has a dropdown table in the middle for drinks or small plates.

Forward of the saloon is the master cabin with a sizeable island queen berth, hanging locker to starboard and a head to port. In 2013 Outbound moved the sink into the cabin itself. This allowed them to move the holding tank into the headspace and raise it, allowing for gravity feed discharge, eliminating pumps and hoses that were previously under the dinette seats, which adds even more storage in the saloon.

From my test sail I got the impression that each couple aboard had taken quite a bit of time in deciding what would be the right boat for their cruising needs. They were all planning on doing offshore passages with their boats—two from the east coast and one from the Pacific Northwest—and would be living aboard for extended periods. After sailing the boat with them and Phil, it was easy to see why they were smitten with the design and build qualities that the Outbound presents. 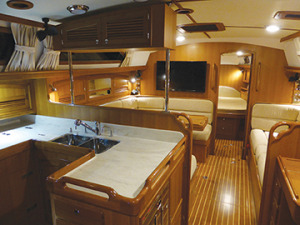 Beyond first appearances is a well thought-out boat for comfort at sea, anchor or the marina—just as Outbound had planned it. The small things and attention to detail are what stick out as you walk through the boat and with performance to match, it’s no wonder they have been going strong for so many years.

I see this boat as the model in couples cruising boats. There is plenty of room aboard for living and cruising in comfort, and if you wanted to invite another couple aboard or take on extra crew to help on passages, there is enough space to accommodate them. And as one seeminly adept show-goer so aptly put it while we walked through the boat together at the docks in Annapolis, “I’d have a hard time taking any other boat over this.” That about sums it up.

(Originally published in the Feb. 2015 issue of BWS)