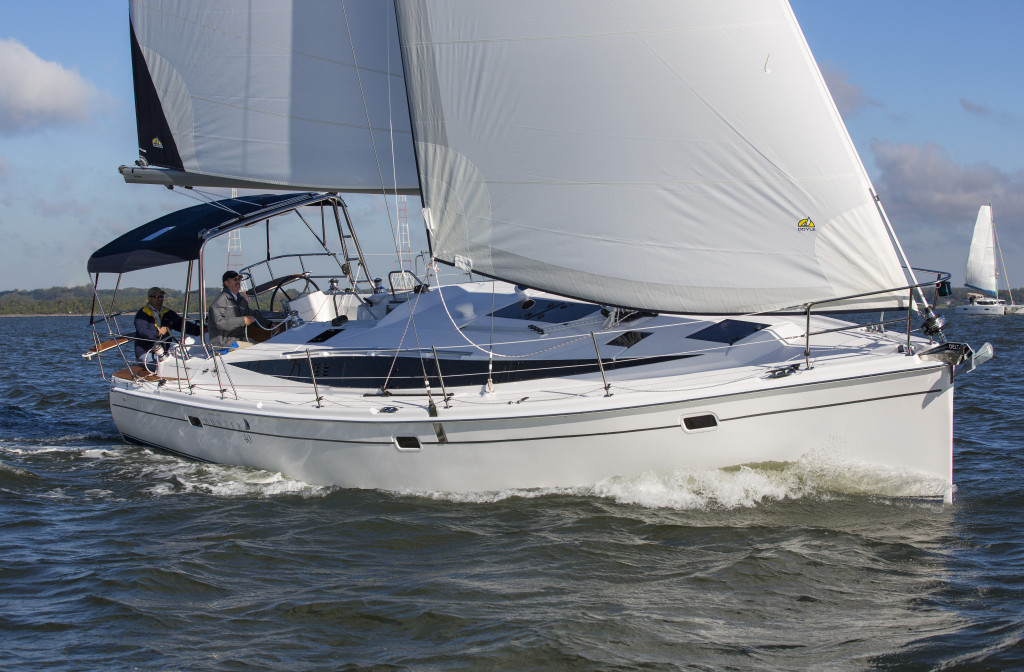 When Hunter filed Chapter 11 bankruptcy and was subsequently purchased by Marlow Acquisitions, LLC, it was hard to see what direction the new company would be headed. The big question within the industry was will this be a Hunter of the past or will the new owner, who builds cruising trawlers in China, take the company in a different direction? With that in mind, I arrived to test sail the new Hunter 40 in Annapolis, Maryland, and came away with a positive understanding of what Marlow-Hunter, LLC, has on the horizon.

Having sailed quite a few brand new Hunters over the years—ranging from the 36 to the 50 and most recently the newest Hunter 39—I thought I knew what to expect before meeting up with Steve Pettengill to give the newly minted Hunter 40 a test drive. I was wrong. 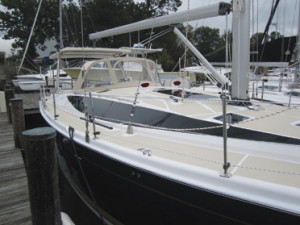 Walking up to the boat, I could clearly tell this wasn’t a Hunter of old, as a host of new features caught my eye before stepping aboard: hard chines, razor sharp cabin windows, a hard Targa top, a fold-down swim platform and a beautiful blue hull with contrasting tan decks. This boat looked like a Hunter, but with a whole new attitude. Clearly, the fresh look is not only a celebration of Hunter’s 40th year of boat building, but a sign of the direction the new company is headed.

Steve and I chatted about the design and evolution of the 40 as we motored our way through anchored boats and out of Back Creek. From our conversation, I got a sense that Hunter and their designers, chiefly Glenn Henderson, are making a concerted effort to breathe new life into their products. To achieve that goal, they are taking what they’ve learned in 40 years of boat building and design and incorporating recent industry trends to make a cruising boat that is fun to sail, easy to use and forgiving at sea, without breaking the bank.

SAILING TRIALS
Once we cleared the channel, Steve passed me the helm and I took us up into a stiff northeasterly breeze to roll out the main. The control lines, led from the deck-stepped Selden mast and in-mast furling mainsail, run neatly back to the cockpit, which allowed Steve to make quick work of rolling out the vertically battened Doyle mainsail. When the loose-foot was trimmed tight, I fell off the wind to get the main drawing and shut down the 40 horsepower Yanmar diesel. We then rolled out the 110-percent jib and, as Steve trimmed for a close-hauled course, the 40 gently healed and accelerated. 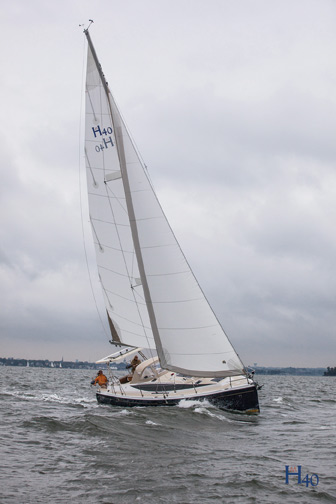 With the wind at a steady 18 knots and gusting to 25, I wanted to see how this blue beauty handled going to weather and positioned myself to leeward at the starboard helm for a clear view of the tell tales. This was one of the first test sails on the boat, so Steve spent time tweaking leech lines on both sails before settling into one of the stern seats to enjoy the ride.

I rarely expect in-mast furling mainsails to perform well in the wind range we had, so I was surprised as we clipped upwind at an easy 7 knots at 45 degrees off the wind. The boat pushed hard, yet forgivingly, to weather and I could tell the hard-chines gave the 40 a little more stability than her predecessors.

We decided to throw in a couple tacks and as the bow moved through the wind it was easy for the two of us to get the jib trimmed in a timely manner. The cockpit of the 40 is similar to Hunters of recent past, sporting a stainless steel arch with a redundant mainsheet, which gives crew the ability to trim from the helm or at an electric winch to starboard of the companionway. The jib sheets are led aft to well-placed winches near the helms and halyard and control lines are conveniently located within arms reach under the dodger, all making for seamless line handling.

Like all newer Hunters, the 40 has a B&R rig with swept-back spreaders that eliminates the need for a backstay and allows for a high-roach, full battened mainsail if the buyer opts to go with a standard main. In the breeze we had, I felt that any extra mainsail area would have given us just a tad too much weather helm, but a single reef would have kept the rail out of the water. 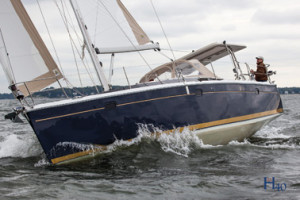 After tacking upwind, I wanted to fall off onto a reach and Steve obliged by trimming the sails as needed. On a beam reach, we effortlessly hit the boat’s hull speed of 8 knots and I hooted-and-hollered as we got close to 9. When broad reaching, the 40 had a nice feel to it and we settled in before putting the boat through a few jibes. Once again, sail handling was smooth and I enjoyed how the arch configuration kept the mainsheet and boom well above the heads of the crew, especially in the moderate to heavy wind.

Though it may have been the last thing we wanted to do given the breeze, we reached towards Back Creek to test the new Spade anchor hanging on the bow roller. After rolling the sails up just as easily as they came out, we turned into the wind, stopped the boat and dropped the anchor over the bow. As the wind blew us down, we rolled out the anchor and chain, which made a quick and abrupt grab that snapped the bow back up into the wind. We don’t often anchor on test sails and I was happy with both the Spade anchor and Lewmar windlass in releasing and retrieving our ground tackle. 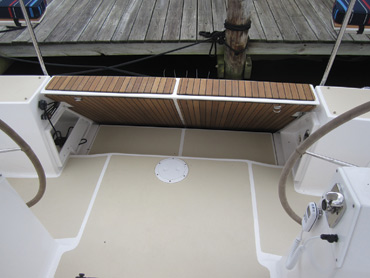 When the hook was firmly set, we tested out the fold down transom, which is a first for Hunter. The platform size is generous and Hunter has creatively designed a ladder that is swimmer friendly and stows away smartly. The platform itself was easy to deploy and retrieve and is a perfect height to swim from or to load and unload from a dinghy.

I was still at the helm as we entered Back Creek and I wanted to see what the boat could do under power. With the 40 horse power Yanmar and saildrive, I powered up and we quickly hit 7 knots of boat speed. After whipping by anchored boats at a good clip, I slowed down to see how well the boat would back-and-fill in a tight space without a bow thruster. Much to the chagrin of the occupants on nearby anchored boats, I spun the 40 around like a ballerina in nearly her own length, then zigged-and-zagged in reverse to get a feel for her handling.

Overall the Hunter 40 was a spirited sailing boat on all points and my pre-conceived notions from other Hunters were proven wrong as the hard chine provided more stability than her D/L ratio of 183 suggests. With an SA/D of 20.38 she is a relatively sporty boat that sails fast and would probably do just as well in light air as in the breeze we had. Under power the 40 operated with ease and I would have felt comfortable backing into a narrow slip or making a hairpin turn in a tight fairway. 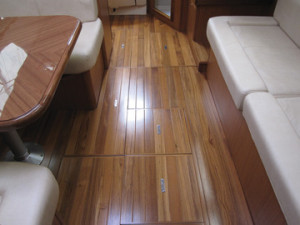 LIVING ABOARD
The style shift for Hunter continued below decks as what I thought would be a standard interior from their previous models gave way to a living space that clearly got a joinery upgrade. The first thing that caught my eye when I stepped down the companionway was the hardwood cabin sole. Gone were the shiny laminate floors that had a nice appearance, but turned into an ice skating rink when wet—which I experienced first-hand a few years back during a particularly rough delivery. The new hardwood sole was impressive as I lifted it to poke around the bilge, not only was it more stout and better fitting, but it looked much cleaner as well. 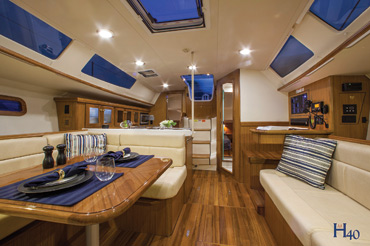 The Hunter 40 comes in two cabin configurations, a standard two-cabin layout with a v-berth and large aft cabin, or a three-cabin version with a v-berth and two aft cabins. The boat I sailed was the two-cabin version and from first inspection it would be hard to choose between them, as they are both roomy with plenty of storage and good access to heads and showers. Aft cabins are typically not blessed with an abundance of headroom above the bunk, but the 40’s aft cabin had a good bit more than I expected. Hanging lockers to port and starboard, plus storage bins on either side of the island queen berth make for enough space to house gear and clothing for a long weekend or a month. Direct access to the head and shower on the port side give the cabin a functional walk-through style and the easy engine access from this cabin will appease any discerning engineer. 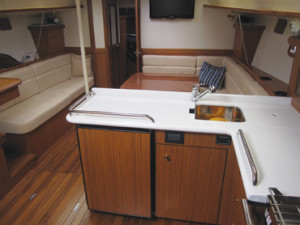 From the companionway, an L-shaped galley is set to starboard and the navigation table is to port. Corian countertops give the galley a nice aesthetic touch and separate refrigerator and freezer units offer plenty of room for food and drinks. Above the counter is Hunter’s unique storage cabinet that is fitted with a small fan and LED light that acts as a dryer and dish storage rack. Forward of the galley is a U-shaped dinette to starboard with a table that drops down to make an extra bunk and a settee to port with storage cabinets above. Large windows and hatches make for good lighting and ventilation and handholds on both sides allow you to move forward and aft with ease while underway.

Just like the aft cabin, the forward cabin is another comfortable living space. With a large centerline bunk, hanging lockers and cabinets for storage, a bench seat and direct access to a head and shower, you couldn’t ask for anything more in a guest cabin.

BWS’ THOUGHTS
After sailing this boat, I got a clear sense that while the Hunter 40 is similar to its recent relatives, there is clearly a change going on in the way the company is designing and building boats. With this new model, Hunter has borrowed some popular features from their previous designs—the overhead arch and B&R rig to name two–and added a handful of new features—the cabin sole, hard chines, hard top and fold down transom—to give the boat a fresh and appealing look. I envision the Hunter 40 as an excellent coastal cruising boat for a family or a couple, and like with most Hunters in this size range, the 40 is clean, easy to use and comes in at a price point that will make any potential buyer happy.