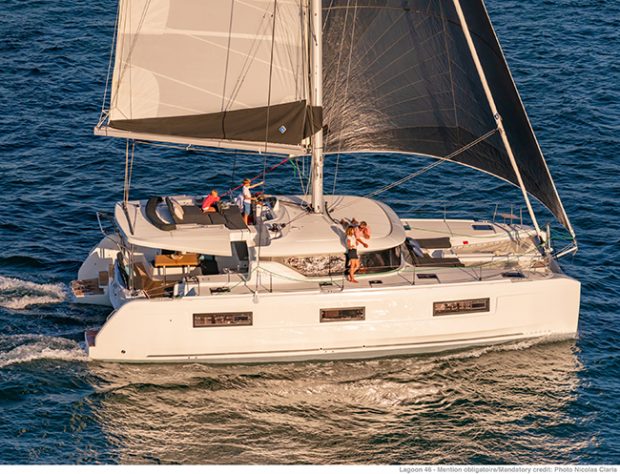 Over the past two years, Lagoon Catamarans has been rolling out new designs that have truly revolutionized their line. The Lagoon 40 and 50 were the first to incorporate a whole series of design innovation that make the new cats much easier to sail and faster on all points of sail. By employing VPLP to design the hulls, Lagoon is getting the sharp leading edge of performance from the team of designers who have won more offshore multihull events than just about any other group.

The new 46 has the new rig configuration that we saw in the 40 and 50 last year. The mast has been moved well aft and the mainsail reduced in size. By specifying a smaller mainsail, the effort required to hoist and then lower and furl the sail is reduced and made more manageable. Those who have sailed with the large, high roach full battened mainsails that have been favored for a long time, will appreciate ease of handling the smaller main. But, you don’t lose much power with the smaller mainsail since the rig is somewhat taller and the sail shape is more efficient, particularly with the square top and large roach.

By moving the mast aft, the designers have enlarged the foretriangle and specified a large self-tacking jib instead of an overlapping genoa. So, the boat can be sailed and tacked by one person without having to turn a winch. For sailing off the wind, the jib can be rolled up and a large reaching sail, such as a Code 0, can be deployed on its own roller furling unit that is tacked down to the small bow sprit.

The hull design and exterior styling was honed by the noted designer Patrick le Quement who has done fine work harmonizing the look of the hulls, decks, cabin and flying bridge. All visual lines flow neatly together and you almost don’t see the flying bridge as it has been tucked into the cabin top instead of mounted on top of it. Le Quement has done a lot with beveled edges and graceful curves to make the look of the new 46 both distinctive and subtly beautiful.

The team at Nauta Design were given the task of designing the 46’s interior spaces and, given the boat’s 25 feet of beam, they had a lot of space to work with. Starting with natural light, the designers drew in huge windows in the hulls to brighten the cabins and a huge wrap around window in the salon. Standing in the galley or sitting at the interior dinette, you have a 360 degree view of the world around you. Or, if you are sitting aft at the cockpit table, you can still see forward through the salon windows.

The 46 comes with either a three or four-cabin layout. In the owner’s version, the starboard hull is a full private suite with a giant head with a separate head stall and enclosed shower. In the four-cabin charter version, there are four equally comfortable double cabins, each with its own en-suite head.

Lagoon will have a full display at the Maimi boat show this weekend so if you are in Miami, you can stop by the show to have a look at the new 46 and the rest of the Lagoon fleet. For more info go to www.cata-lagoon.com.