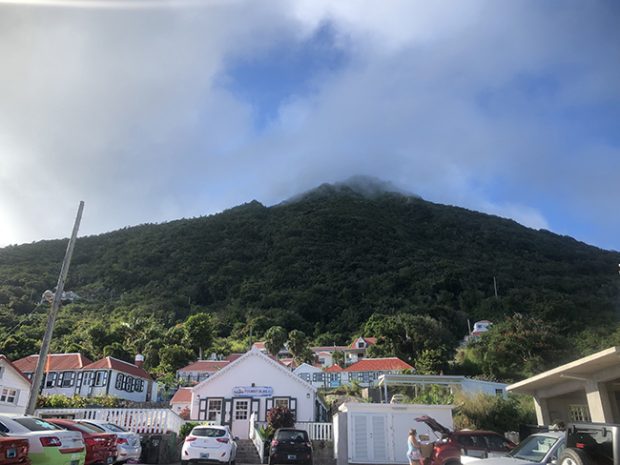 A quick glance at my cell phone reminded me of the lack of coverage, causing the anchorage to feel even more remote than it first appeared. As I sat in Roam’s cockpit, our Moody 47, I marveled at the birds in full flight in the shadow of the towering cliffs. Mountain goats could be heard bleating in the distance from impossibly high perches, and I watched in awe as a family of goats balanced precariously on a narrow ridge.

Arriving into Fort Bay earlier that afternoon offered little protection from the ever so slight northerly swell that caused our boat to roll as though we were still underway. With the ocean floor 20 meters below our yacht, it was far too deep to anchor, so we had tied to a mooring ball before clambering into the dinghy to make our way to the customs and immigration office. We were eager to check into the country and explore the smallest municipality of the Netherlands, the Dutch island known as Saba. 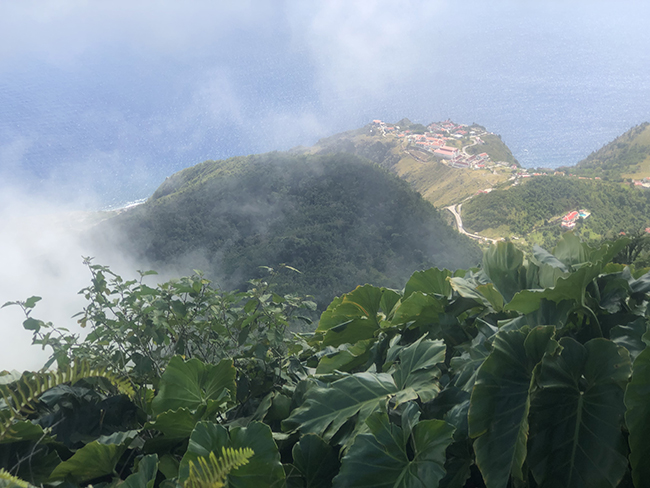 We had planned our arrival c 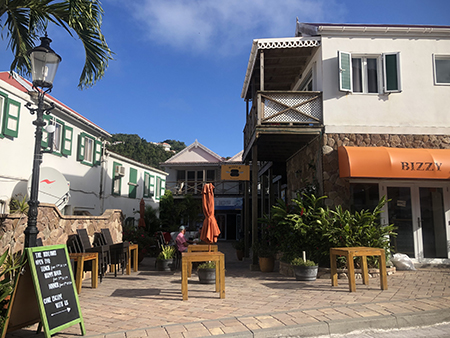 arefully. With low winds from the east and minimal swell from the north, according to the port control officer, conditions were perfect. Unfortunately, that didn’t prevent the incessant roll that threw us around our bunks like rag dolls that night, rising the next morning with aching backs. We’d heard stories of cruisers being marooned on the island for days, unable to dinghy back to their boat due to the dangerous swell. However, now, as I stood on the barren shore, the ocean looked calm and innocent. Cliffs loomed above, and besides the customs and immigration office, a rundown bar and a dive shop, my first impression of the island was that it looked barren and inhabitable.

With a population of 2,200, we quickly discovered Sabaens to be some of the friendliest people we had met on our travels throughout the Caribbean. Seeking directions to town, “straight up mon,” was the reply we received. He wasn’t kidding. Thirty minutes later, we all but stumbled into the village amusingly named, The Bottom. Set in a valley surrounded by mountains, the stone walls and white cottages with their red roofs and decorative embellishments, looked like something out of a fairy tale. Colored shutters adorned the windows, and pink flowered vines entwined themselves around picket fences. The streets were spotlessly clean and the town quiet, almost empty. It felt as though we’d found a lost civilization or stumbled onto a movie set. If it wasn’t for the Rastafarians smoking marijuana, we could have believed we had accidentally sailed to Europe. 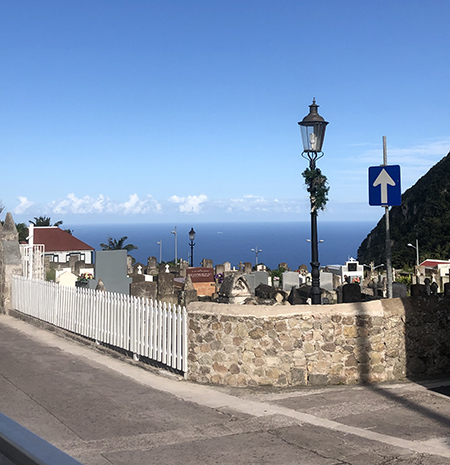 Perhaps the only Caribbean island without a beach, we were excited to explore what this unique destination had to offer. Aware that hitchhiking was a safe and acceptable way to get around the small island, we stuck out our thumbs for a ride to the village of Windwardside. As we darted along the cliff’s edge in the back of a pickup truck, we couldn’t help but wonder how many vehicles had come to grief on this road that many said should never have been built. With nothing between us and the sapphire water hundreds of yards below, our usually tanned knuckles were white, yet our faces exhilarated. Arriving safely in Windwardside, the greenery that surrounded us on the mountain’s overhead were a stark contrast from the brown rock we had initially approached by sea.

Wanting to stretch our legs, we learned of a hike up the island’s highest mountain known as Mount Scenery. The walk consisted of 1,064 stairs up to the summit of an active volcano, 887 meters (287 feet) above sea level. After only minutes on the trail, our hearts were pumping in our chests. A soft and delicate moss grew on all surfaces of the path, vines and creepers were competing for the life-giving light. Passing lemon and cocoa trees, an unlikely pair, we made our way to the summit. The higher we climbed, the steeper the trail became. Clouds began to drift through the trees like ghosts, disappearing the moment I tried to capture them on film. The stairs became slippery, and the ground was moist. After two solid hours, we finally reached the top. To our disappointment, the view was obstructed by a thick layer of cloud. We sat despondently, hoping and wishing our efforts would be rewarded. Several minutes later, the clouds parted like the heavy velvet curtains of an old theatre, and the sight before us took our breath away.

With only moments to appreciate the view, we marveled at the tiny towns below us. So perfectly in proportion, you could have mistaken the sight for that of a scale model of a small village. Turquoise swimming pools were dotted evenly between red roofs and shrubbery. With a clear view through to the neighboring islands of Eustacia and St Kitts and Nevis, we tried to take it all in before the next wave of clouds blew over. It was a truly memorable moment. Descending in an hour and 15 minutes, our ankles ached, and our legs were like jelly. We made our way back to our dinghy, hoping the roll of the sea had abated. 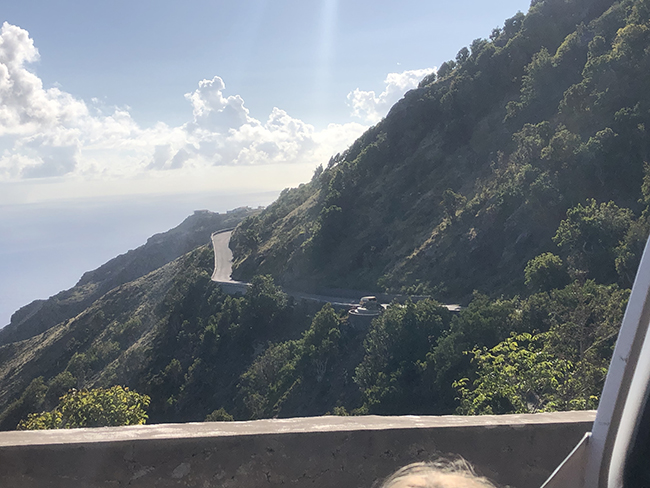 Approaching Roam, we saw her mast swaying to and fro like a metronome. That was our cue to motor to the leeward side of the island to a mooring field known as The Ladder. Like a stairway to heaven, the ancient stairs in front of which we were moored, were originally the only entry point to this fascinating island. The strong and hardy locals would ferry all of the island’s supplies up the 800 impossibly steep stairs carved into the rock face. It was also said, that when royalty visited the island, they too were carried up the stairs, though perhaps not like a sack of flour.

If the land alone wasn’t impressive enough, one look below the water’s surface soon revealed a treasure trove of brightly colored fish and sea creatures. With rock faces that fall below the water as dramatically as they rise above, Saba is a diver’s paradise. Complete with caves and tunnels, pinnacles and seamounts, sea turtles could be seen gliding gracefully through the underwater wonderland while octopus and moray eels hid in secret crevices. Known as the Saba Marine Park, visitors can choose from a number of dive operators through which to experience the unspoiled natural beauty. 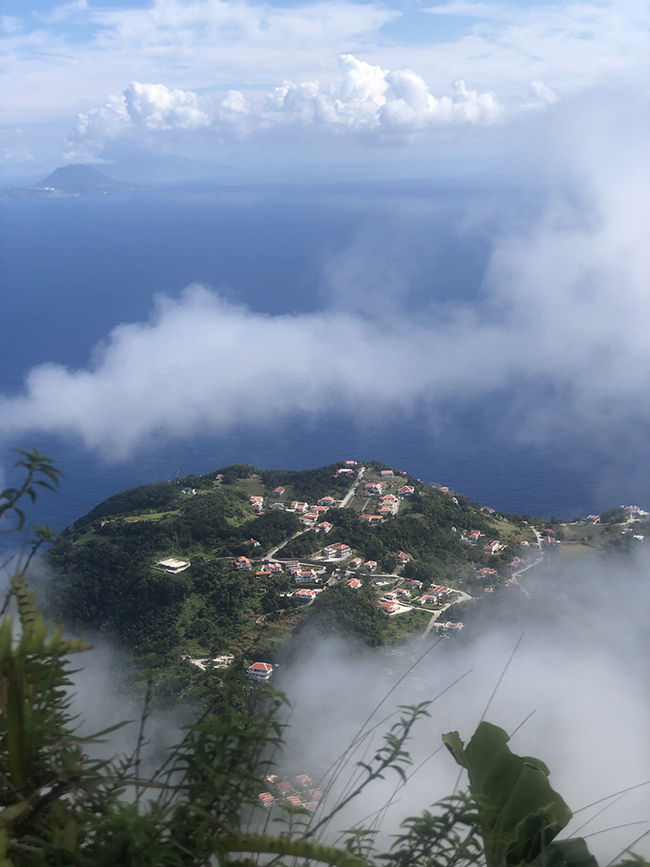 Saba is unique in that it doesn’t feel like the Caribbean at all. After visiting endless palm tree-lined bays and beach bars, it’s a refreshing change. The fact that the surrounding waters are deep and daunting, with difficult access ashore only adds to Saba’s mystery. You won’t find a marina or cruise ship terminal, sun bed or coconut vendor. Yet you will find solitude, a place to disconnect and a real sense of adventure. You will dinghy ashore in what feels like open waters and your boat will rock and roll, you will hitchhike with strangers, and you will climb to great heights. You will witness incredible views from the back of trucks, and you will marvel at natures wonders. You will smile and greet each and every person you pass because that’s what Sabeans do. It’s any and all of these things that make a visit to the island of Saba, an absolute must for sailors of the Eastern Caribbean.