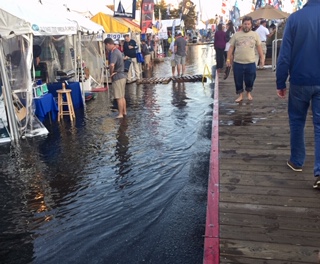 Highlights from the Annapolis Sailboat Show

There was a spring tide in Annapolis last weekend and when that happens you are glad you are at a boat show because what you really need in that situation is, of course, a boat. Despite the floods, the show had a great energy. The crowds on Thursday and Friday were huge and the weekend got even busier.  Vlogging sensations off La Vagabond and SV Delos were at the show, which may have, in part, accounted for the huge crowds. Between the two vlogs, they reach almost two million people with each new YouTube video. Remarkable.  Here are some of the cool new things we found at the show.

Catamarans:  A large segment of the sailing world has decided that two or three hulls are better than one and considering the sailing performance and creature comforts in modern multihulls, it is no wonder. New cats on display included the all new Kinetic 62, the Lagoon 67, the NEEL 47, the Fountaine Pajot 45, HH 68, the Balance 562 and a new and improved version of the venerable Antares 44.

Monohulls: Dufour, which was bought by Fountaine Pajot, rolled out a large display of their models that include their new 390 and 430; Jeanneau introduced their new Sun Fast 3300; Beneteau had their new First 53; Catalina had their brand new 545; Outbound introduced its new 565; Hanse had an enormous 67 footer; Passport had their 615 Twin Cockpit; and, Oyster had its 575.

In the tents, the gear, equipment, clothing, charter and after market products spanned the whole sailing industry and every conceivable sailing endeavor. It would take a serious week of effort to visit every booth and learn about every product.

The buzz at the show was the best we have heard since the Great Recession almost killed the sailing industry. That’s happy news and we look forward to a great year of sailing ahead.