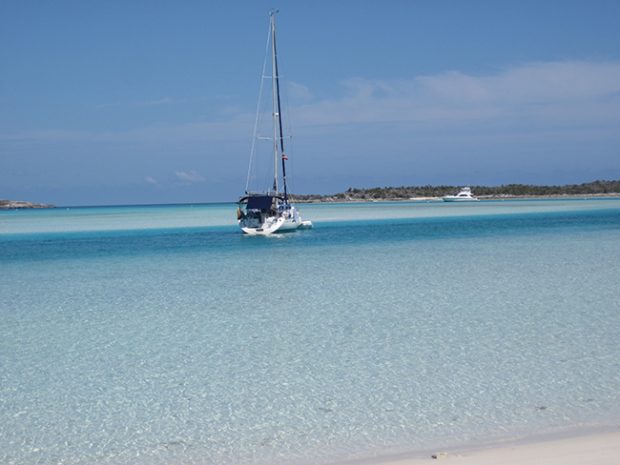 I grew up sailing in Nantucket Sound which is notorious for its many sandy shoals and generally thin water. Most of the boats we sailed were shoal draft with centerboards but that didn’t stop us from running aground from time to time. I guess if you grow up running aground, you get kind of accustomed to it being a fact of the sailing and cruising life. As my friend John used to say, “If you don’t run aground occasionally, you aren’t really exploring the best gunkholes.”  But not everyone feels that way.
Our most recent cruising boat was a Jeanneau 45.2 with a shoal draft bulb keel. We took Lime’n down the ICW and to the Bahamas and only ran her aground a few times, once in Georgia, once in a canal in Nassau and once at Warderick Wells. But it was aboard our Mason 43 Clover with her 7-foot draft that we more regularly ran aground. We put her on an unmarked sandbar in Nantucket harbor as we looked for a spot to anchor. In the ICW, we hit bottom several times. In the Bahamas we plowed furrows in the sandy bottom at Farmer’s Cay. In Indonesia, we bumped into a coral head as the family discussed who would go forward to be on “bommie watch.” While anchored in Suakin in the Red Sea, we found ourselves sitting on the bottom when the tide went out far more than expected. We bought Clover because of her full keel and attached rudder, knowing the places we were heading were poorly charted and groundings were a definite possibility. And she brought us home with only a few dings in her keel and us unscathed.
Our worst grounding was early in our five year circumnavigation. We were at the head of Delaware Bay and decided to anchor inside Reedy Island for the night. We got the anchor down, had dinner and were about to turn in when the tide changed and left us lying uncomfortably sideways to the wind. Ugh. We had to move, so we upped anchor and headed for the narrow cut in the east side of the island. With Rosie calling “More to port, more to port” I misjudged the current, which shoved us right onto the side of the cut where Clover got seriously parked. As the water fell, she lay over to about 20 degrees on her starboard side until she was almost high and dry. We had to wait for the full cycle of the tides to play out and early next morning, just before slack at high tide, she floated off and we were on our way. Luckily, there was no damage to Clover and there were no witnesses.
Have you got a grounding story you’d like to share? If so, email it to me at: george@bwsailing.com.