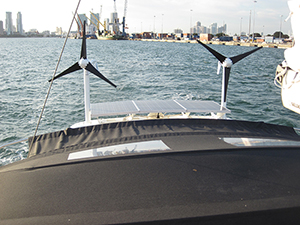 Hi George,
We had a KISS on our old boat and it was fine. Not like a helicopter taking off but not totally obnoxious either. New to us boat came with a D400. It’s amazing. Puts out plenty of power and is super quiet. Probably wouldn’t have shelled out the money on our own but would if we ever had to replace it.Best,
Alison Nichols
SV Walkabout
Hans Christian ‘38 Telstar

We installed a MarineKinetics wind generator before our Pacific crossing in 2018.
I would highly recommend this unit as it is efficient, light and has a state of the art controller. (Not so with the D400 which uses a resistor bank in a cage to dissipate excess power). Take a look at the info on their website and I can personally vouch that our experience with this wind generator supports what you will read.

Before I purchased ours I spent an hour on the phone with the engineer that designed the unit and he really represented it well.

This KISS High Output Wind Generator, though no longer in production, is still popular and going strong on cruising boats. Hotwire Enterprises sold the manufacturing rights to Cruise RO Water, but we’re still supporting KISS owners with parts and technical support. [727-943-0424] Lucky is the boat owner who finds a used unit at a nautical flea market! For sailors in the trade winds who want a new unit, we’re recommending the D400 (the quietest wind generator we’ve never heard) or the Superwind.

George,
When we were in Whangari, NZ the second time in 2012, we installed the D400 after researching wind generators. We had been warned about noise and had experienced noisy neighbors at anchor. The D400 got good reviews. Because we were circumnavigating, we felt the need to access as much extra power as we could during passages. We never regretted it and he became known as Winston. In winds over 40knots, like most wind generators, he needed to have his blades tied down. We also bought a towed generator that we didn’t like.

Dear George,
We have an Eclectic Energy Duo Gen on Roundabout II. With it and 480 watts of solar, we generally produce all the electricity that we require. The Duo Gen is relatively low output in wind mode but starts producing at low wind speeds and even a few amps/hour helps over a 24 hour period. It is quiet and does not disturb our neighbors. Where it truly shines is when it is converted to water Gen mode. On passage it makes more electricity than we can use with no effect on boat speed. It has been a reliable source of power for 22,000 offshore miles. We highly recommend it!

George,
We had a Superwind on our Baba 40 and it worked flawlessly for the 20 years we had that boat. It was quite quiet and sounded like the wind blowing through the pines. We cruised from Maine to the Bahamas and Florida for 8 years and would highly recommend a Superwind.

Hi George,
I have had wind generators for many years. Those three bladed ones are very noisy and are so annoying in anchorages. Mine was a two bladed Hamilton Ferris that was extremely quiet. You could not hear it as long as it was balanced. Except when the wind blew of 25 knots, then it sounded like a quiet aircraft propeller. It also produced 15+ amps in 15 knots. I loved it as it worked throughout nights and cloudy days. Added with solar panels, I never had a problem with power. No one ever complained about noise and no one even noticed there was one onboard while sitting in the cockpit. The key was balanced blades. Hamilton Ferris is a great man, and was always there to answer questions. Also, his high output alternators I used were also really dependable. I am not affiliated with the company, just a very happy customer. I am surprised that the Chinese made three bladed wind generators are so popular and the two bladed ones are rare. It might be cost, but quality does count. Also, mine could be used as a towable generator with some added parts for long crossings.

George,
I added an Air Breeze by Southwest Windpower soon after you first published about your experiences adding one to Lime’n to a Beneteau 46 and 5 years ago moved it to my new boat, a Beneteau Oceanis 48. I did not experience unusual noise from the blades, it was a whoosh noise but after adding the blue blades made in Portugal most of the whoosh noise was gone. I paid particular attention to vibration and noise deadening at attachment point to the boat, which was on an arch, not directly mounted on the hull. After 10 years use, I had the bearing replaced and electronics upgraded by Southwest. I’m pleased with it but it looks like some other manufacturers, maybe Rutland, are coming out with higher output models but I don’t know their noise characteristics.

Wanted to send a quick reply to the wind generator article…hope it helps. We put on a KISS wind generator more than 12 years ago before we left on our circumnavigation. It has broken once and we had to rebuild it in SE Asia, which was not painless, but at least it was possible. Perhaps, if we were sitting In an anchorage on a mooring all the time not making ocean passages, or at a dock, we would find space for another solar panel, but it just has never been possible to install another panel in a way that it would not be a compromise of the safety or seaworthiness of our boat.

During big winds, 30+ knots, especially at sea, the noise can definitely become unbearable, and we usually just shut it off. But during normal trade wind type sailing it’s hardly noticeable, and it alone keeps the batteries charged and running our Raymarine autopilot, chartplotter and instruments. The solar is usually too shaded by the mainsail when we sail to do that much good.

When we are at anchor, nobody has ever complained to us about the noise of our KISS, and we often sit in the cockpit with it running, with little disturbance. We actually love to hear it running because it means we won’t have to run our little portable generator or engine. It is great to be able to put in energy 24 hours a day sometimes, instead of just the sunny hours of the day. And when it’s a stormy cloudy period and everyone fires up their generator or engine for hours each day, we sit there, soaking up 10-15 amps coming in around the clock.

The sound of some wind generators running in an anchorage is not bothersome to us; they are so distant they are just part of the tranquility. If we hear someone else’s generator beyond a distant hum, then it’s probably time to change positions since that means they are probably uncomfortably close for other reasons! In a marina, when boats are closer to each other, they can be annoying especially since shore power could be charging most of those boats.

George,
While only having been on the Pacific side of Mexico for the last three years, I’m not making the best use of a wind generator (winds not consistent like in a trade wind are) but I do like my Super Wind 350. I sleep in the aft cabin of my Hylas 46 and the Super Wind is mounted right above my head when in bed. I don’t hear it. When I’m in the cockpit, obviously then I can hear it and my opinion is that the sound is a very soft background noise, not the higher pitched hum I hear from so many others. In fact, yesterday I noticed I could hear my neighbor’s wind generator over mine.

Hi George,
I sense that, after the aftermarket blades, the configuration of the mast and supports, and the amount of rubber padding at the mounting points may have a great deal to do with noise. Our AirX Marine is not a bother.