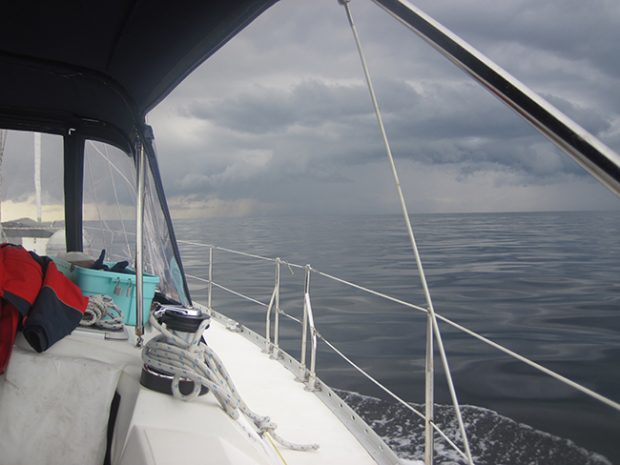 Dodging Squalls or Looking for Them

The last third of the passage from the East Coast to the Caribbean takes you through the Horse Latitudes and into the easterly trade winds and in these two weather zones you are very likely to meet a squall or two. In fact, you might meet one or two every day if there are any troughs swinging through. The thing about squalls is that you never really know until you are in them how fierce the wind and rain will be.

On a trip along this route I made with friends several years ago in the Salty Dawg Fall Rally, we found ourselves sailing right down a slow moving trough that was generating thunder squall after thunder squall. During the day, we’d see the clouds ahead building up and billowing skyward and soon we’d see the black underbelly and then the curtains of rain. The squalls were trundling westward at about 10 knots so if we were lucky, we could change course to the east and sail behind it, just as we would do with a ship. But, if we couldn’t sail around it, we’d just slow down, put in a reef, roll up some headsail and let it go its merry way. One night on that trip we sailed right between two squalls that were putting on a fireworks show fit for the Fourth of July. We got a little rain on us but not much wind.

Then, there are times you go looking for squalls. On a passage across the Atlantic from the Canary Islands to Bermuda, which took us around the bottom of the Azores High that sits over the Sargasso Sea, the navigator, moi, kept shaping a course too far north to shorten the trip. We kept sailing into the high where there was no wind and found ourselves nearly becalmed several times. There is usually wind under clouds and always wind in squalls, so we kept an eye out for either and would then motor toward them and try to ride along in the squall for as far as the system would take us. We got rained on but we had wind and that was the most important thing.

Like most things, there are bad and good sides to squalls and for offshore sailors it’s good to know the difference.