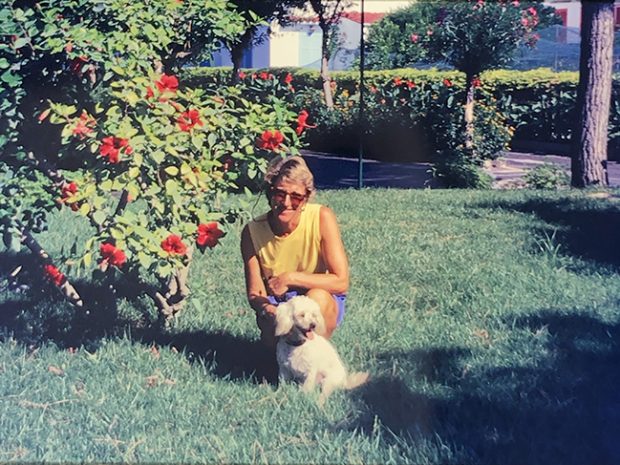 My Bonnie Lies Over the Ocean

When we took off from home in Rhode Island to sail westabout around the world, we rented our house and then had to find a home for Willy the dog. We were headed to Polynesia where they eat dogs and to New Zealand and Australia where boat animals had to be quarantined for six months at the time. Our renters fell for Willy and agreed to adopt him. I’ll never forget the forlorn look on his face as we left him on his bed at home for the last time and drove away.  He survived and had a very happy life with his new family in his own home.

After three year of living aboard without a pet, we found ourselves sailing in company with Adrian and Lotte and their German Shephard Fluke, who were emigrating by boat from Singapore to British Columbia. It was Fluke who sparked our desire to find a good dog to sail with us. That wasn’t going to happen in Southeast Asia or the Middle East, not pet friendly regions, so we had to wait until we got to the Med and Cyprus to find a sea dog. Near Larnaca, we found a dog trainer who took in unwanted dogs and by chance he had a small white Bichon cross mutt for sale. When we visited the kennel the little dog immediately bonded with us. Her name was Bonnie, which seemed perfect.

She moved aboard and rapidly became a salty little sea dog who would scare off sea gulls and alert us to any approaching visitors. We got her a pet passport with her photo in it and by the time we got back to Rhode Island it had stamps in it from 12 countries. She cruised all over the Med with us, crossed the Atlantic and shared our every adventure and special moment. For us, having a little sea dog with us enriched the whole experience. Two years later, when we got home, we moved off the boat and back into our house, Willy’s house, and Bonnie moved in, too. She lived another seven years and then one night cancer took her and she died in Rosie’s arms. We buried her next morning in the garden.  She was a great ship mate and a right little sea dog with almost 5,000 miles under her keel.