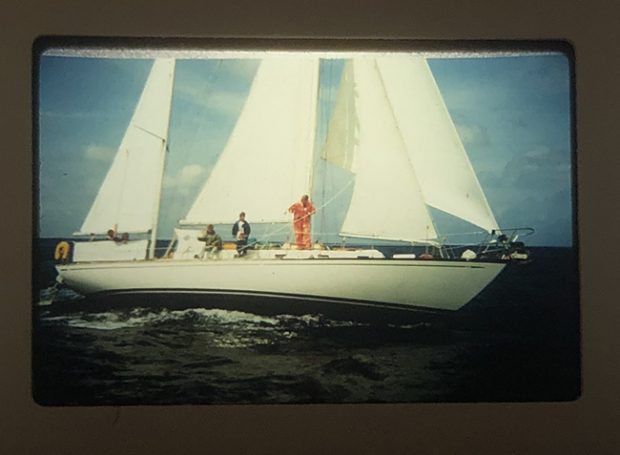 Hand Steering All the Way

It happened at 0200 on a dark and blustery night, as it always does. I was on watch alone. Rosie and the boys were asleep in their cabins and Clover was rolling down the waves before augmented tradewinds being steered as always by our wonderful Sail-O-Mat auxiliary rudder wind vane. The windvane had worked so well and for so long that we had opted to not install a mechanical autopilot. We were two days out from Maupiti in western French Polynesia and bound for Va’vau, Tonga five days away. I was in the galley making a cup of tea when Clover suddenly rounded up and backwinded the genoa that was poled out wing and wing. I rushed on deck with the flashlight and looked over the transom to find that the auxiliary rudder had sheered off and was gone. There was a sacrificial collar that was supposed to protect the rudder from damage and a stout lanyard attached to the top of the rudder post to catch the rudder if the collar broke in a collision. But, as luck would have it, the solid aluminum post sheered off below the collar and below the lanyard.

Rosie followed me on deck and in a few minutes we had Clover back upright and sailing under shortened sail on our course to Tonga.  But we were now hand steering in strong tradewinds and large rolling seas, which required a lot of effort. We took one-hour tricks at the helm for the rest of the night and then started a two-on, two-off watch routine. They boys were nine and 11 and not strong enough to manhandle the helm in the rough conditions, so the steering fell to Rosie and me. Two hours on, two hours off for five days  Rosie was five-foot five and half and weighed 120 pounds but she really showed what a slight frame and a big heart can endure. By the time we got to Tonga we had been through one of the most effective weight loss and upper body training programs you can image. Rosie was absolutely ripped with arm, shoulder, stomach and back muscles standing our like steel cables. We both had lost almost 10 percent of our body weight.

We made landfall at Va’vau at midnight so we hove to off the entrance to await dawn. And then something amazing happened. In the moonlight and in the calm lee of the island, a pod of humpback whales came by to check us out and circled Clover for almost an hour. Exhausted to our cores, we sat and watched them blow and dive over and over in a hypnotic rhythm as they fed. It was the most wonderful welcome we’d ever received.