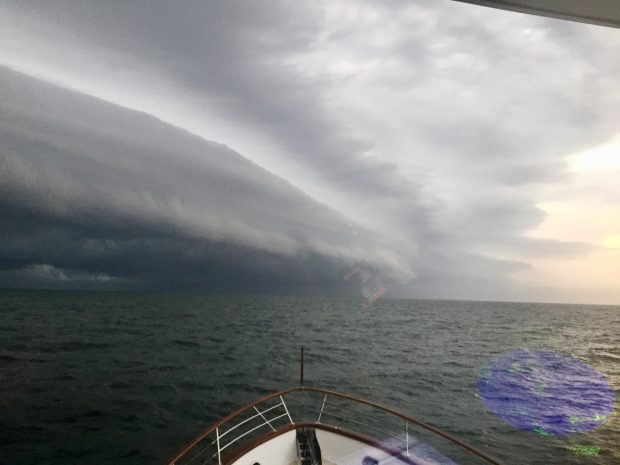 On Tuesday of this week a mighty line of thunder squalls rolled through Newport, RI, where we live. The sky grew incredibly dark, then the boomers began, first in the distance, then closer and closer like the sound of an invading army’s cannons. Then the rain came, light at first and then heavier and heavier until it was a full downpour. We got two inches in less than an hour that flooded the streets and winds strong enough to blow over small sailboats that are stored in cradles on the hard. The first thing Rosie said when the storm passed was, “I am sure glad we weren’t at sea for that!” Me too.

But we have been at sea for squalls like that and I’ve had them roll in without knowing they are coming. Squalls like that tend to be very local and associated with a passing cold front running in front of a warm air mass. To maintain good situational awareness out there, you need to be up to date with forecasts, and keep an eye on wind direction and strength, the build up of towering cumulous clouds and to temperature changes. And you need to have a plan of action. In our weekly survey two weeks ago we asked readers about carrying storm sails. 73% of those who answered do carry storm sails, mostly storm jibs or storm staysails. And many said they choose to use a deeply reefed mainsail—either a third reef or a seriously rolled up in-mast or in-boom main—instead of a trysail.  The consensus was split between those who sail in heavy weather with deeply reefed main and storm jib, and those who go with just a main or just the jib. The important thing is to know how you and your boat do best in suddenly, squally, windy conditions. It may be safer to be at sea than ashore these days but we still need to keep a weather eye and be prepared to survive the storms.