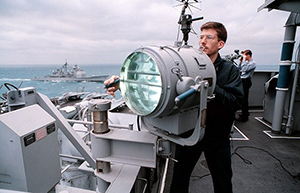 In last week’s Just Cruising, I wrote about communications aboard cruising boats and offered some of my experience and asked readers to chime in with what they have found works best for them for email, text and voice communication. Here are two useful and well informed replies. Fair winds. GD

Hi George,
Your comments on communication match my experience and my research, as I am writing a communication chapter for the Passage Guide for the Viking Route I have mentioned before. I will add that we lived by SSB/Pactor, Amateur Radio’s Winlink (like SailMail), for all weather/ emails etc. for a decade or more and only very rarely were thwarted by propagation. I consider it pretty reliable.
As for the satphone vs SSB question, my answer is asking their motivation: for those whose comm concerns are primarily safety issues and talking to friends/family back home, I recommend satphone and the SSB is best for feeling part of the cruising community and as a hobby. Many go with both nowadays.
My best, Dick Stevenson, KC2HKW, s/v Alchemy

We are currently docked in Whangarei, New Zealand, amongst the diverse international cruisers who have found themselves gratefully trapped here during the pandemic. In our community are boats from the U.S., Canada, Germany, Italy, the U.K., France, Holland, Belgium, Norway, South Africa & Australia, most of whom have arrived on their own keel. This gives us a unique perspective on current coms thinking for offshore cruising.

• A high percentage already have & use IridiumGo & it is universally praised for effectiveness & simplicity.
• Most of those that don’t, are planning on incorporating IridiumGo before leaving.
• The majority use PredictWind for weather & tracking….also universally praised for ease of use.
• There are some supporters of SSB but their rationale is almost exclusively based on voice communication nets, not email, not weather info, not ease of use. They are generally ignored at dock happy hours.
• I’ve never heard anyone discuss adding an SSB.
• There are no Ham users.
• Many are aware of Starlink & see that as the future.

My conclusions would be:
• HF radio is the past…..expensive to install, complicated to use, analog, shrinking user base.
• IridiumGo is the present….low installation cost, inexpensive data plans, simple to use, facilitates email, weather, text & voice through existing devices (smart phone, iPad, laptop).
• Starlink is the future…..will add broadband capability.

Related to your article:
• I don’t see the rationale of adding an SSB just for cruising net communications due to the cost, complexity & difficulty of use. In addition, you would be adding a technology that is rapidly becoming superseded by less expensive, simpler & more flexible means, implying your potential audience will be reduced every year.
• A separate sat phone also seems unnecessary since IridiumGo creates satellite voice communications via your existing smart phone through the IridiumGo ap. Most data plans also have a component of allowable voice minutes for this purpose. Our monthly plan through PredictWind allows 150 minutes of voice per month, along with unlimited data & text.
• As email & text have begun to replace voice communications in the world as a whole, email & text should become the dominant means of communications in the cruising world. We have friends who have just left for Fiji. If I want to see how they are doing, I would email first & text second with a reasonable expectation that they would receive my question. I never considered asking if they have an SSB & doubt that they do.
• Email & text via IridiumGo now, & Starlink eventually, is simpler & more reliable for nets such as boats on passage, eliminating the propagation issues. The concept of “net” is the same, it’s just the component of “voice” that is replaced……though if you don’t mind using the voice allowance on your data plan, you can have that too.

It has been a very interesting year+ here in New Zealand. Our circumstances are a little different since we bought our boat here & arrived from the U.S. in January, 2020 with the intention of cruising the South Pacific. However after getting caught by the pandemic with borders closed & New Zealand being exceptionally safe, we are still here & looking forward to being elsewhere eventually.

The New Zealand government has been exceptionally understanding to the cruising community & extended visas for visiting yachts from all around the world. We have learned a lot from the sailors that we’ve met.