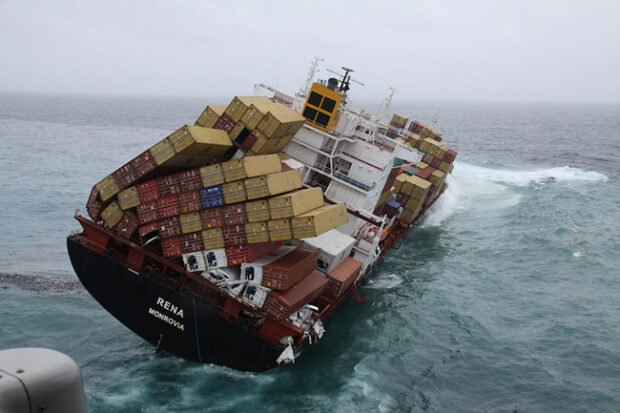 What to Do About Lost Containers Adrift at Sea?

In last week’s Just Cruising I brought up the issue of containers lost from ships and adrift at sea posing hazards to other vessels and to the environment. Several readers responded with their takes on the problem and what might be done about it. Read on. GD

Good solutions; shipping companies should be required to report all containers lost. They are already reporting to the container owner and insurance. This would be easy, even automated in their software.  And a cheap, ubiquitous tracker could easily be required and installed.  I know containers can float in many different configurations.  If installed in the center of the ‘roof’, that area seems most likely to be exposed to sea water in the most dangerous containers that float at the surface.  The ‘contracker’ could have a float free antenna puck that stays tethered to the container.  Deployment and activation could be the system used by EPRIBS.

Read your article regarding lost containers . Another solution would be to make/modify the containers to sink when they fall into the ocean. That cargo is lost anyway, so there wouldn’t be any additional monetary loss. I sail in the ocean near San Francisco and have raced to Hawaii several times. Hitting a submerged container would be no joke out there.

Just read your article about hazardous containers at sea. Has anyone ever considered using RFID chips on all containers being transported at sea to locate, recover or avoid them once overboard? Hope this helps.

I agree wholeheartedly that all commercial vessels should be required to report all lost cargo with time and position reports and I agree that all cargo containers should be equipped with some sort of tracking device enabling avoidance or even salvage.  If there were incentives such as salvage possibilities there would be incentive to pick up some of these lost containers thus removing the hazard altogether.

Hi George:
I appreciate your comments! We haven’t encountered any containers at sea because it’s still our dream to be able to do this for my wife and I. We sailed our boat across Lake Michigan and often wondered why containers on ships don’t have a simple ASI device so they could be reported lost with tracking and later recovered by the shipper? One night while sailing on Lake Michigan we were lucky enough to receive a coast guard message on the radio about a pitch poled log weighing an estimated 3,000 pounds near our position. We were able to change course to miss it just in time. This is not an item that could be identified if not for sailors reporting, however a container on a ship it is a known event as soon as the container is lost most of the time. I’ve read stories of people hitting these things and sinking and it worries me for when we do sail at large in the oceans. The insurance companies’ industry should lobby for this form of legal responsibility because its preventable, and would hedge their losses.