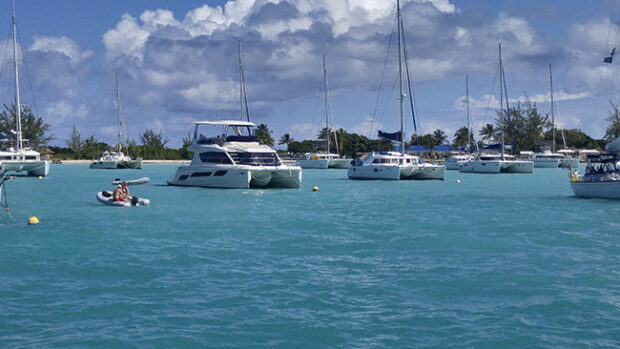 In last week’s Just Cruising column, I raised the question of whether it was time for Rosie and me to move from a monohull to a multihull for cruising. I’m very tempted; she, not so much. We got a lot of good emails from readers who all have interesting takes on the monohull/multihull question. Enjoy and fair winds. GD

I’m a native Rhode Islander and we’ve been in Newport since 1990. Harbors have certainly shifted in terms of hulls. We are proud mono and multi-hull owners. One hull, two hulls, and three hulls! Currently, we own s/v Zen, an Atlantic 48 catamaran by Chris White Designs and s/v Wren, a 54 year old Marshall Catboat. After owning four monohulls and blue water cruising one of them, we made the move to our multihull. Why are we converts? We appreciated the ability to safely sneak through shorter weather windows with ease. By not exposing ourselves to bashing seas and heavy winds meant our safety was heightened.  Additionally, a monohull’s heavy keel translates to life rafts and sinking. Our catamaran can be punctured yet won’t sink. It becomes our floating platform. That difference appeals to us and our cruising kids.

The gorgeous lines of a monohull, perfectly balanced, slicing through the chop while heading 35-degrees off the wind is a truly beautiful sight to see. But, for living aboard and long distances, we choose 2 hulls over one.
Monique Burgess

I grew up sailing and racing monohulls. We had a C&C 25, 31 and then a Pearson 35 when I was a kid. I’ve done the Newport to Bermuda race 13 times on a Hinckley 42, raced J 105s and until recently had a J 42 that my wife and I cruised in the Chesapeake and New England. I’m a monohull guy. Or I was…

We recently had the opportunity to buy a new Balance 451 that we commissioned in January and took to the Bahamas in February. The 451 has relatively narrow hulls, dagger boards and a tall rig. She actually sails.

I miss sitting on the leeward side and steering to the telltails but, boy, is she a joy to be on. The room, dinghy access, open, single level living and galley up are hard to beat. My wife said “I don’t think you will ever get me on a monohull again.”

The primary drawback is the motion. Cats sail on the water, not in it. The motion really bothers my wife who never had issues before.

The other issue is dockage. While cruising, we prefer to be on the hook or a mooring, but on those occasions when you need a marina, from the Chesapeake north, the marinas are geared toward monohulls at this point and cat dockage is hard to come by.

In response to your recent Cruising Compass article on monohulls/multihulls…………..my thoughts:

We decided the best way to come to a conclusion on this choice was informing a comparison through direct experience sailing a select number of cruising cats. With a racing background, we limited our options to performance cats and began a two-year research project. The exploration took us from a boat show test sails, to a week’s cruise in the Caribbean, to the Baja Ha Ha, to three offshore deliveries and to two owner’s regattas in the south of France.

Our biggest concern was giving up, as Rosie said, “the feel of her heeling as the sails catch the wind,” & all the sensory experiences that entails. We quickly discovered that is absolutely a reasonable concern. We also quickly discovered though that while different, the sensory experiences of a performance catamaran were equally compelling. The connection to the ocean snuggled into the lee side of a heeling monohull was replaced by the ability to stroll 360 degrees around the boat through the cockpit, side decks and trampoline and experience the ocean from many vantage points. The slide of water past the rail of a monohull doing 6 knots, was replaced by the exhilarating rush of water off the transom of a cat doing 10 knots.

Coupled with this realization, we knew we were not getting any younger. Since we wanted to continue cruising until we didn’t want to anymore, the comfort of sailing on the level, watch standing from a fully enclosed salon, having ready access to supplies and stores, minimal vertical level changes and space to move around all combined to support the choice of a cat.

After two years sailing in New Zealand and living aboard our Outremer 49, we are certain we made the right choice.

As to complicated vs. “simplicity,” all cruising boats are complicated. We have spent two winters in a marina with a wide variety of international cruisers, monohull and multihull alike. The monohulls include well known brands such as Oyster, Taswell, Able Apogee, Beneteau, Hallberg Rassy and Swan. The multihulls include Leopard, Knysna, Outremer, Lagoon, NEEL and Catana. As far as I can tell, everyone spends a lot of time working on their boats…..refrigeration, canvas, heads, rigging, generator, engine, dinghy, outboard, watermaker, etc. Generally, I’d say we have more space to incorporate all these systems so they are easier to access, but no more complex…..minus maybe the two engines part, but that’s numerically different, no more complex.

We also haven’t found our cat more complicated to sail, just different. Many of the forces on a monohull are mitigated by their hull shape, inherent sailing characteristics or rigging adjustments. Heel, motion through the water, backstay tension, sheet car position, etc. can keep these in check. This is less so on a cat. Even though we have a traveler & outhaul for adjustments, the boat mostly goes straight through the water and waves faster as the wind increases. Correspondingly, the forces on the boat can increase significantly without overt signs. To sail well and safely, you become attuned to more subtle clues, more subtle feel and pay more attention to the numbers. Balance and loading is mostly a matter of sail area. Reefing main and headsail are the controls.

If we were keeping our boat in the local waters of the Chesapeake, Long Island Sound, Puget Sound, coastal California, New England, or cruising weekends or two week trips, Stray Cat would arguably be too much boat. A fine, sexy monohull or even a trawler would be a great choice.

As soon as we start talking about venturing offshore, an extended cruise or making passages, we would still choose a performance cat.

Hi George,
Great little editorial!  We’re multi-folks (Leopard 40) up on Lake Michigan (until we head to the Gulf this fall!!!).  The ratio on the GL’s still greatly favors monos so we get frequent questions re: our preference.

I’m pretty consistent in stating “I don’t care what you use to get on the water, mono/cat/power/kayak/etc, just get on the water”.  However, how you behave on your chosen platform is a totally different issue (note I didn’t mention Jet Skis!!!).

The growing number of cruising cats is even reaching us here in the Pacific Northwest. With fickle winds in the prime summer cruising months, it’s hard for me to warm up to a big cat that really needs a decent, consistent, wind to get moving. That said, for the nervous spouse for whom sailing is their partner’s “thing”, the level condo on the water is very attractive. In many cases, it’s what can convince that reluctant partner to come along.

What I worry more about is where we’re going to put all of these huge boats. Unlike the NE, here in the NW there are few mooring fields. People like to keep boats in the water year round. That means they are looking for a slip…in the case of a big Cat often two slips. However, no one is building new marinas, and existing marinas have waiting lists a mile long for any openings. We won’t even talk about the waiting list for “liveaboard” space.

I’m blessed every day I wake up on my Passport 40, next to a partner of 42 years who likes the sailing (and me) enough to come along. We won’t be selling to get a cat. But we’re not immune to the things a Cat can do. In May we flew to San Diego to rent a Leopard 40 for four days, take the classes and pass the ASA Catamaran tests. Someone has to drive next April when we fly to the BVIs with three other couples for an adventure in warm water.

Dan Leach
Hi George & Rosie:
One Hundred percent, Rosie!! You said it all and I am totally in accord with you. Give me small and courageous KANDARIK any time over any multihull!