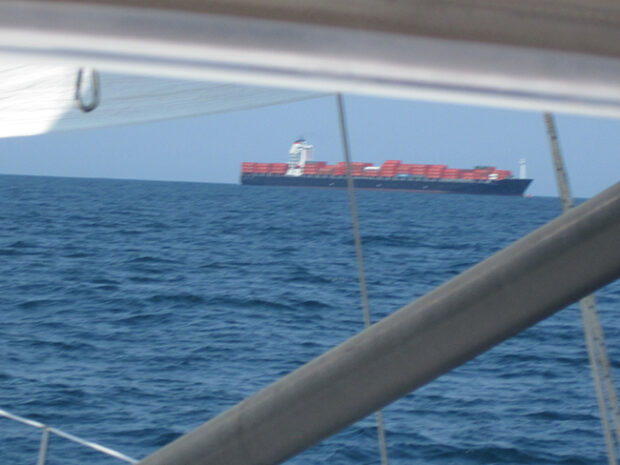 Greetings George,
Thank you for your very well stated position about staying on watch with only two persons. We made numerous passages from Cape Fear direct to PR, BVI, and mostly to Antigua. We found that we were better off with just the two of us, totally familiar with the boat; vs. having a crew on board. We were able to stay well rested and fed and maintained; unless something untoward came up, like a freak, undetectable Tropical Storm forming over our heads with instant 70+ gusts, steady at 50. Just one mile from the charted position of the S. Bermuda weather buoy.  Our barometer and the black clouds were the only warnings. Our two weather routers (one pro- Chris Parker, one amateur with 16 such crossings) and our rally router could not see any disturbance that would account for the growing black clouds and plummeting BP that hit a low of 970mb! We furled the head sail and reefed the boom furler to 40%, turned on the Yanmar, battened down and waited. After dark of course, it hit like a bomb with a 72kt gust 270 degrees from the current wind which had been 12-15 NNE. after a four hour clock back to NE at 45-50 it settled to ENE. We did not hit the buoy! But would have never seen it. Radar was blanked and it did not have AIS (never have understood that?)
As the low center moved to the SW the gradient winds stayed 40-45, then 35-45 for 6 days, to shelter in Barbuda. During that time, we really suffered from fatigue, stress, and poor food. We constantly trimmed the sails and course in an attempt to find a sweet spot in the boat’s motion, without running off to the west and miss even the BVI.  We were unable to get REM sleep; although secured in our bunks, our insides kept moving and we could not really sleep. In four days we were having audio and visual hallucinations. I have no idea how we continued and coped with the inevitable problems that came up with the stresses at work on the boat. But, by the grace of God, we made the wave lee of Barbuda, got a good anchor with part of another boat caught on our keel, and slept for 14 hours! Two days later we sailed into Jolly Harbor, largely intact.
Would it have been better with a crew. I doubt it. As with other passages, the usual tough patches of such a voyage required significant interventions on our part; keeping an eye on people unfamiliar with our 2011 Robert Perry Tayana and keeping them fit for duty. We had one couple who had great creds, the husband was a licensed captain with years of coastal experience, looking to build his offshore log book; but his wife became a basket case in 25-30 kts wind from 230 degrees apparent ( a perfect 200+ mile/day scenario). We are retired RN’s and literally had to sedate her into three days of sleep, with IV anti-emitics! The next year we had a crew of two guys, one a well seasoned offshore racer, an other was an over represented “charter captain.” The racer guy was on watch 125 miles SE of Cape Fear, 18 hours out; who sacrificed our mainsail to keep to the rhumb line as the wind became contrary. I was deep in navigation and a rally weather briefing; my wife felt the boat was wrong and went topside just in time to see the mains’l burst. That return to shore, sail repair, and restart delayed us two weeks, setting us up for the above scenario in the middle of Nov.  from a rallye start on Nov. 2. We were near the head of the pack. Not that we were racing, no not gentlemen sailors that we were.
After we found out what we could do, we always passaged as a couple. I cannot imagine that experience with the “charter captain,” who could not come down the companion way ladder facing the ladder. He even fell off tied up to the dock! It took him four more falls to get it right!
Fair winds, calm seas, and a Light to steer by.
Cap’n Charles Wardle
Formerly, S/V Montanasky

Hi George,
We sail almost solely as a couple. We tried 3-on/3-off and some other variations, but never got good sleep: too long to nod off, awakened when in deep sleep, etc. As a result, we were always tired.
I also found that I get grumpy if I do not get good sleep.
The following only works if you are not steering the boat.
We have a nice dinner and Ginger goes to sleep around 2000. She sleeps till 0100 and has watch till 0600. Then 0600 to 0900, 0900 to 1200, and 2 hr watches till 2000. We are quite strict about the watches even if both awake and active as someone has to have the head-set that they are responsible.
The above gives a good solid chunk of sleep of 5 hrs, augmented by a nice chunk of 3 hrs in the morning and usually a nap in the afternoon. We are never overly-tired with this schedule.
We tried 6 hr watches at night, but finally settled on 5. Once settled in after a couple of days there was no danger of falling asleep while on watch, I think because we had that good chunk of deep sleep.
My best, Dick Stevenson, s/v Alchemy