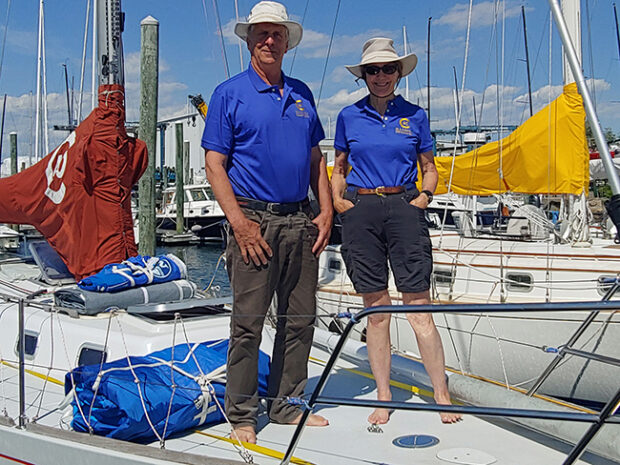 The 2022 Newport-Bermuda race gets underway off Newport, RI this Friday, June 17, and promises to be one of the largest fleets to compete in the 635-mile “thrash to the Onion Patch” in many years. The race always attracts a galaxy of sailing stars and a collection of offshore racing boats of all shapes, sizes and ages. Especially notable this year is the appearance of Stan and Sally Honey aboard their famous Cal 40 Illusion. The couple are two of the most accomplished sailors in America and have chosen this year’s race to be their grand finale. In offshore sailing and racing circles, that news was a bombshell. Here’s how the Bermuda Race Press Office responded by publishing a charming interview.

NEWPORT, RI (June 9, 2022)—Speaking with Sally and Stan Honey in the cabin of their Cal 40 Illusion, the conversation is as easy and breezy as the gorgeous day topsides in Portsmouth, R.I. The ocean-racing couple, who’ve racked up many victories racing from California to Hawaii, is preparing for the 52nd Newport Bermuda Race, some 11 days away.     The Honeys, from Palo Alto, Calif., are well advanced in their preps. The crew is set: 1984 Olympic Gold medalist Carl Buchan (Seattle, Wash.), fellow Cal 40 owner Don Jesberg (Belvedere, Calif.) and the redoubtable Jonathan Livingston (Richmond, Calif.) are all experienced and legendary West Coast sailors in their own right.     The boat has been stripped of its cruising amenities and returned to its ORR race-measured configuration: the dining table and floorboards are removed, the heavy anchor and chain are gone, and the heater has been disconnected and removed. The safety inspection has occurred.
And then Sally, the two-time Rolex Yachtswoman of the Year, drops the mic. “Basically, we’re looking forward to our last hurrah racing,” says she, who has co-owned the record-setting Cal 40 with Stan for 34 years. “We’re buying a powerboat… transitioning to the dark side.”  Read more.