As the sun set on our first night out from Portland, Maine en route to Annapolis, Maryland, I listened to the forecast, checked GRIBs and knew we were going to be in for a wild ride. A low had passed just twelve hours prior and the winds of change were blowing.

Just after dark, the breeze came up from the southeast and then, as expected, began to back. East. Northeast. North. Soon we were galloping south on a broad reach with a full main, jib and staysail drawing to perfection. Arctic Monkey, the Garcia Exploration 45 that Jill and I were tasked with delivering, reveled in the fresh breeze and we ticked off the miles in fine fashion.

By sunup we’d made it to the Cape Cod Canal, furled the headsails, lowered the main and motored through the winding seven-mile channel. When we reached Buzzards Bay the wind had built and the easy call was to go ahead and tuck two reefs in the main right away. Now blowing a consistent 25 knots, we took off like a shot through Quicks Hole, left Martha’s Vineyard to port and ran like our hair was on fire out into the gray North Atlantic Ocean.

That night the wind did everything but abate. Fishing boats passed either side of us and when the wind reached the 30s we found ourselves doing what we could to slow down. Sailing on a very deep broad reach, we weren’t quite able to sail wing and wing, nor could we carry a headsail on a broad reach. It didn’t matter.

With just the main up we regularly saw speeds in the 8 to 10 knot range and surfed consistently in the increasing swell at 11 to 13 knots. On we went, night and day. Three hours on, three hours off.

By the time we’d reached the outer entrance to Delaware Bay and the Delaware River, it was blowing a full 40 knots and we’d gone from two reefs to three, to no main and then just some staysail. The boat still loved it, and so did we.

But going from the depths and swell of the Atlantic to the shallow bay was a change. Passing ships in the night in the narrow channel was tedious and by sunrise, the C&D Canal was fine on the port bow.

Turning into the canal put us downwind again and coffee and bacon quickly went on the stove. With the excitement of the finish in our eyes, we ran down the brown waters of the Chesapeake, under the Bay Bridge and past a fleet of Friday night racers into Annapolis Harbor. It was hard to believe we were there already, but our minds were still on the ocean. 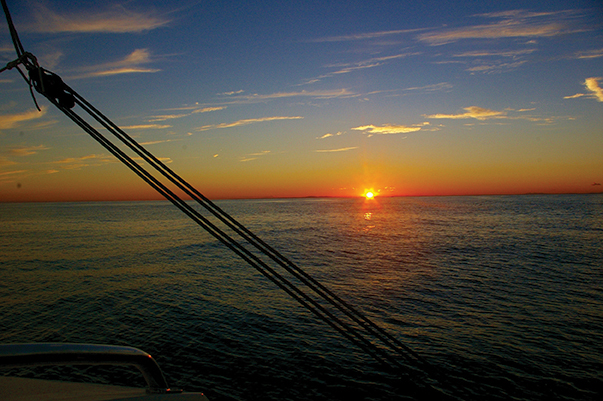 Overall, we sailed 530 miles non-stop in just 75 hours. We pushed it, but did so safely and, for the most part, comfortably. With the boat swinging on a mooring in Annapolis Harbor at happy hour, we made for Pusser’s and on wobbly sea legs bellied up to the bar for the rite of passage we’d earned — a Painkiller.