The future of onboard energy production is here  (published November 2015)

Alternative energy sources used to keep our batteries topped up and our amenities running have long been a hot topic amongst cruisers—with almost everyone staunchly defending their own version of what works for them. But as we all know, what works for one cruiser doesn’t always work for another, so it’s helpful to have an array of options available when deciding on what’s best for your boat and cruising plans.

Alternators, solar panes, wind generators, water generators and gasoline and diesel generators are all offered through a number of sources to help you keep your batteries topped up while you’re sailing or at anchor. But each one has a knock against them, which leads many people to wisely choose the redundancy of a multi-unit setup to keep things running.

One highly overlooked yet worthwhile alternative or compliment to all of these, though, is a marine fuel cell. I’ve recently had experience with two different boats and their owners who had fuel cells aboard, an EFOY Comfort on a 1985 Passport 40 and a Hydromax 150 on a 2003 Jeanneau Sun Odyssey 43. Here’s what I learned about the units and how they worked to keep power topped up aboard.

WHAT IS A FUEL CELL & WHAT ARE MY OPTIONS
Very simply put, a fuel cell generates direct current (DC) power through a chemical reaction. The byproduct of this process is mostly water, a small amount of heat and CO2 if you are using a model that uses methanol fuel.

While this sounds futuristic and brand new, it is actually not a new technology at all. The first fuel cells were invented in 1838, and NASA used them to power the Apollo mission and other spacecraft beginning in the 1960s.

Compact, lightweight and able to basically be used as a plug and play power source, fuel cells are a growing market in a host of industrial, commercial, transportation and residential applications—and they’ve recently made their way onto the marine market in North America. 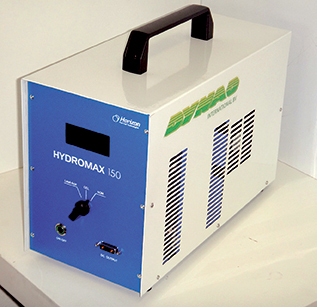 Currently, the two options for boaters are the EFOY Comfort, created by the Germany-based SFC group of companies, and the Hydromax 150, which was developed by Dynad in the Netherlands. Both of these units have seen success in the motorhome industry and are now making a push into the boating market.

The Hydromax 150: The Hydromax 150 is the size of a small suitcase that, along with the fuel containers, can be setup pretty much anywhere that you have space aboard your boat. It can be hooked up to 12 V lead-acid, GEL, AGM, and lithium batteries (in GEL mode) and makes power through a chemical reaction that creates hydrogen.

The unit works by mixing two water-based solutions together that are housed in separate containers— a salt (Hydrofuel) and an acid (the Additive, aka malic acid). Mixing the two creates a chemical reaction that produces hydrogen gas. The hydrogen molecules are then split by a catalytic converter that creates electrons. The electrons then flow through an electric circuit, which is the electric current used to charge your house batteries. The split hydrogen molecules come into contact with oxygen and water is the byproduct. Once the process is finished, a washing cycle automatically cleans the unit and pumps out the waste product (water and a small amount of malic acid) into a separate container. 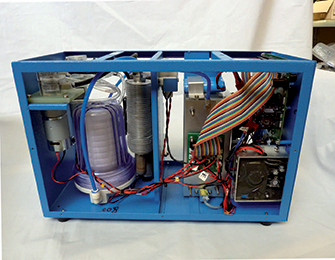 I watched the Hydromax work aboard the Jeanneau and except for a slight hissing noise upon startup, it was virtually silent and gave off very little heat. During the startup phase the unit produced a 14 amp charge and then leveled off at 12.5 amps during the bulk charging phase. Other than running the engine to get from one anchorage to another, the owners had no other alternative sources of power aboard and reported that the Hydromax more than took care of their energy needs while cruising. They also said that if they were out cruising full-time, they’d probably add solar to reduce the amount of time they needed to run the unit.

The EFOY Comfort: There are three different units of EFOY Comfort that generate either 80, 140 or 210 Amp hours a day. The EFOY works out of the box with all of the common battery types found aboard, including lead-acid, GEL, AGM and lithium (in GEL mode). Depending on which unit you are using, the EFOY will produce between 3.3 to 8.8 amps of power when operating at full capacity.

The basics of an EFOY unit are that it contains a fuel cell stack that consists of an anode, a cathode and a membrane that acts as an electrolyte, separating the anode and the cathode from each other. The unit then employs DMFC (Direct Methanol Fuel Cell) technology that transforms methanol directly into electrical current.

An EFOY Comfort set up includes two main components—the briefcase-sized fuel cell and a specially designed 1.3- or 2.6-gallon hydrogen-rich, purified methanol fuel cartridge that looks like an oversized plastic milk carton. The only other piece is a small, easy to mount remote control panel that lets you change settings, monitor fuel levels and turn the unit on and off.

While operating, the byproducts of the EFOY unit are warm air vented out the back, a tiny amount of CO2 and distilled water that can be routed into a container and used to top off your flooded batteries.

There is almost no maintenance or moving parts to worry about. Except for changing out the fuel cartridge, it is a set it and forget it piece of equipment. 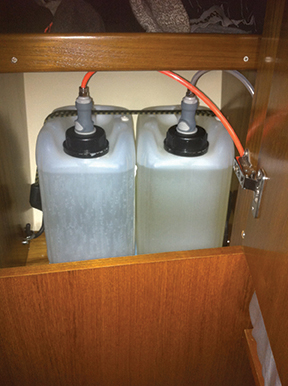 SIMILARITES & DIFFERENCES
By all accounts, both units are incredibly easy to install, and are quiet and efficient. They create little to no heat and are virtually maintenance free.
Installation is as easy as wiring the units straight to your house battery banks, and the Passport owner said that he had the EFOY unit temporarily installed and working in about 15 minutes. A permanent installation would take somewhat longer, but can be accomplished by any competent do-it-yourselfer.

On their default automatic settings, the Hydromax and EFOY will turn themselves on once they sense that your battery voltage level has dropped below 12.3 volts and will continue running until it reaches 14.2 volts. You can also turn them on manually via their respective control panels. And neither unit will interfere with the other energy sources you have aboard, such as solar, wind, a generator or alternator.

One thing to keep in mind with each unit is how you obtain the fuel to operate the cell. If you’re cruising locally in North America, getting the refills from an authorized dealer isn’t much of a problem. But if you’re taking off to far flung locales, you may want to stock up before you leave or talk to the dealer about how to get fuel from them in the remote places you’ll be visiting.

While I’m by no means an expert on either unit, from what I can tell the differences between the two are in the fuel used and in how much output they produce.

As noted above, the EFOY Comfort runs on a methanol cartridge that produces water, a little bit of heat and CO2. The Hydromax is fueled by a combination of salt (Hydrofuel), which is a substance containing sodium borohydride and is non-flammable, and an additive called malic acid, which is a commonly used food additive known as “apple acid” that is not dangerous. The salt and additive can be stored anywhere aboard in their powder form before use.

The other main difference I discovered between the two units was in their output. The EFOY Comfort is supposed to produce between 3.3 to 8.8 amps and the user on the Passport 40 said he regularly sees five to six amps of power going into his house batteries when the Comfort 140 is running at full capacity. The Hydromax 150, on the other hand, has been reported to regularly provide up to a 14-amp charge per hour, and the Jeanneau owner confirmed this was the case for them when their batteries were quite low.

IS A FUEL CELL RIGHT FOR YOU?
As with solar and wind power, having the ability to run a fuel cell to create energy in a clean and quiet manner while at anchor or sailing instead of running your boat’s main engine or a noisy generator is a huge positive. And it might be a good solution for you. But just like wind and solar, it really depends on the type of cruising you plan to do. I can envision fuels cells being a perfect solution for weekenders and those who use their boats for a week or two at a time and don’t want to purchase and install a solar array or wind generator.

Just like you would when deciding on any energy source, though, deeper research into the nuances of fuel cell power and of each unit is highly recommended before making a purchase.

Available through Hydrovane Intentional Marine Inc. (www.hydrovane.com, yes the same as the self-steering units) the Hydromax 150 is $3,725, a Hydrofuel Dry Refill Cartridge is $40 and an Additive Dry Refill Cartridge is $12. A full Fuel tank and a full Additive tank can last for about 24 hours of production and will produce about 300 Ah, which comes out at around 10-days at 30 Ah per day.

The EFOY Comfort currently retails at Fisheries Supply (www.fisheriessupply.com) from $3,500 to $7,000 and a 2.64-gallon fuel cartridge is $80. One gallon is purported to last up to 30-days of regular use.

Of course, as with all the alternatives, a fuel cell isn’t a perfect solution, and solar, wind and water powered energy generation may still be great for your onboard requirements. But a marine fuel cell is definitely worth a look for cruisers who are trying to fill a gap in their energy needs, and may be an excellent alternative to installing an onboard diesel generator or buying a gas powered generator.

Only time will tell if fuel cells catch on in the marine market, but they are certainly well poised to help many cruisers find a viable answer to the ongoing energy dilemma aboard. And if nothing else, they’ll at least provide one more talking point for them to kick around over sundowners.

This article was created in collaboration with Three Sheets Northwest (threesheetsnw.com).