Sailing to Bermuda isn’t always the easiest passage, and stopping there can have surprises of its own  (published November 2013) 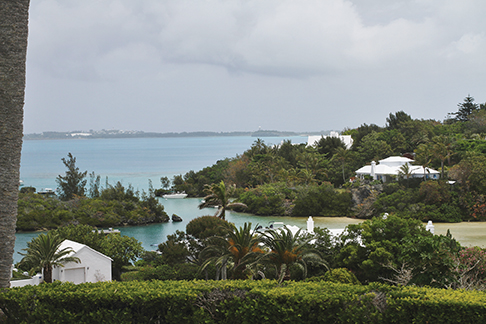 The delivery out of the BVI aboard Alerre, a Swan 61, had gone smoothly. With plenty of sailing behind us and reserve jugs of diesel, we had enough fuel to make it the last 600 miles to Newport, RI. With a crowded schedule and delivery costs in mind, I looked hard at the weather forecast. The 35 knot headwinds, gusting to 45 for the final day of the approach to Newport didn’t look particularly desirable. It could be achieved, but heavy weather and forecasts have a way of going bad, and the uncertainty had associated risks.

Moving boats north from the Caribbean in the spring or south from North America in the fall has numerous potential pitfalls. Bermuda, to one degree or another, always seems central to the process. The island lies along most of the usual routes, whether you are departing from the northeast or mid-Atlantic coasts, or the eastern Caribbean, Bermuda is a haven along the way.

Efficient schedules aren’t attained by stopping, however, so my default routing plans are usually to bypass Bermuda if possible. But on this delivery, with the anticipated weather looking marginal, it was worth giving a stop-over some thought.

One of the most common reasons for hiking and mountain climbing accidents is people trying to adhere to schedules. There’s some important event that requires attention, so prudent decisions are swept aside and risks taken. The same is probably true in long distance sailing. Sometimes the risks are overcome.  Sometimes not.  Of course, risks are always present whenever the dock lines are tossed off, but with forethought, most of them can be minimized.

As an example, a few years ago when preparing to depart Newport for the Caribbean in mid-December, which is dangerously late in the season, I stacked the crew with highly experienced heavy weather sailors who would be able to stand up to full storm conditions if necessary. Fully prepared and experienced in the ways of storms and the ways of avoiding problems, we were ready for the cold conditions and heavy weather.
Such was not quite the case last spring as we brought Alerre north.  Most of the crew’s experience—happily enough—had been in moderate conditions with the occasional bout of heavy weather. So, after a brief discussion of the forecast and the fact that Bermuda was only about a day away, discretion, it was decided, would be the better part of valor. We would stop for a few days and let the heavy weather pass. Schedules could be rearranged, and risks would be minimized.

Landfall in Bermuda can be tricky the first few times it is attempted. Reefs surround the island, and there are few safe approaches to the land.  Typically, sailors notify Bermuda Harbor Radio by VHF radio well in advance of their arrival. The radio operator will ask a series of questions designed to help you in the event that you have problems. They will want to know the size of the liferaft, whether or not you have the appropriate charts aboard, the types of communications equipment you have and other useful information. If you know you are going to stop in Bermuda, all of that information can be sent to Bermuda Harbor Radio prior to your departure by going to their website and filling out the appropriate form (http://www.marineandports.bm/of_visitingyacht.aspx). Then, as you approach Bermuda you still must radio ahead to confirm your approach and seek permission to make landfall. 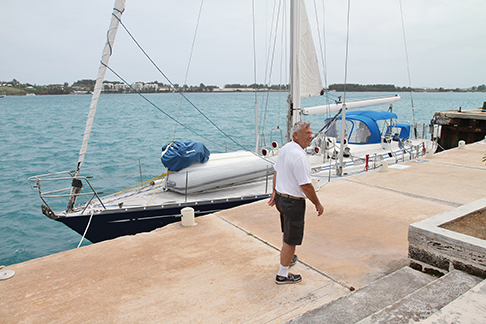 Once Alerre was moored in St. George’s, Bermuda, as the storm passed to the north of us, we had a few days to kill and a beautiful island to explore so I decided to take a long overdue break for a few days.  As luck would have it, our brief stay coincided with Bermuda Day, complete with parades and other festivities. Of course, there are lots of tourist things to do, places to go and sites to see in Bermuda whether you want to wander through the beautiful botanical gardens, explore the underground caves, soak up the sun on a pink sand beach or climb over the old fort at the Dockyard. Stopping for a few days, not only turned out to reduce risk and be better for the boat and crew, it also added to the overall experience of the trip.

Once the weather north of Bermuda settled down, we were ready to set sail again. But the ocean between Bermuda and North America has its own set of idiosyncrasies with the major hurdle being the Gulf Stream.  Whether you are sailing north or south, you need to give careful consideration to how you approach and cross that hot, swift ocean current. Currents can move between two and five knots in some places, and the meandering warm water stream will definitely affect your route and the local weather.  In addition to the actual speed and direction of the current, the Stream influences the size and shape of the waves. If winds are strong and blowing against the current, the waves will be particularly tall and steep. Strong northeasterlies can turn the Stream into a living, waking nightmare. Conversely, strong to moderate winds blowing with the current can turn the passage into a sleigh ride; ideally with warm, sunny skies dotted by small, puffball, fair-weather cumulus clouds.

Approaching the Gulf Stream, small cumulus clouds will be the first sign that the warm current is getting closer.  There are a number of websites that offer infrared images of the Gulf Stream to help you determine its location.  And among other means of identifying its whereabouts, altimetry data will confirm its location by measuring the height of the water from space.  Amazingly enough, the height of the water can vary as much as three feet or more, depending on the current.

From the deck of the boat, however, another sign that the Stream is near will include Sargasso weed strung out in long patches. Portuguese man o’ war will become more numerous and flying fish will start to appear soaring over the wave tops and occasionally landing on deck. The warmer water has other implications as well.  The warm air rising off the surface of the water will not only create those little puffy clouds, it will also increase the likelihood of lightning and thunderstorms at night, adding power to any squall line that may be approaching ahead of cold fronts. The Gulf Stream definitely deserves respect and it will get your attention every time you sail across it. 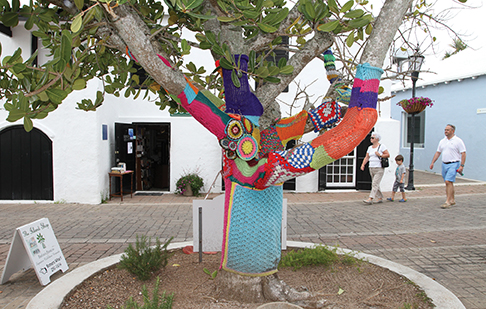 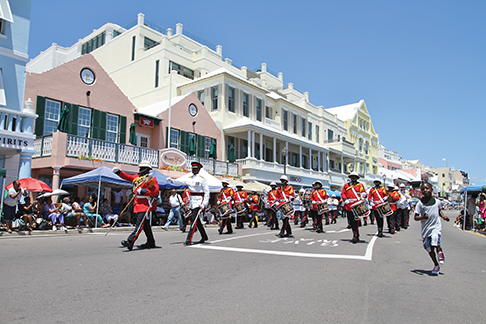 Making landfall in Bermuda has a number of twists and turns, and for sailors, the stop must be earned to one degree or another. But whether you plan to visit the island or end up there due to weather, low fuel or other reasons, this gem of the Atlantic is always a pleasure  to visit.