In the last few decades, sail handling has come a long way and it has changed not only how people sail, but how long they can continue to keep sailing. Devices like roller furling for headsails and push button mainsail control have allowed people getting up there in age to keep getting out on the water and enjoying their boats. There is no need any more to go crawling around the foredeck to drag down a genoa in a stiffening breeze or to wrestle with reefing a mainsail. Instead, much sail handling can be done from the safety of the cockpit. There are, however, pros and cons to each device so let’s take a closer look at things starting with mainsail handling systems. 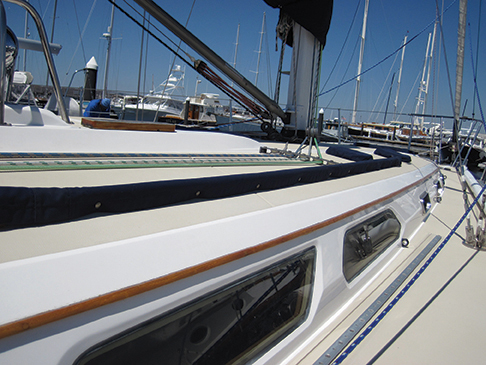 MAINSAIL SYSTEMS
In the early 80’s Ted Hood, the famous founder of the sail making company that bore his name, saw a need for some kind of device to manage mainsails. His clients were getting older and often would go sailing under jib alone, the mainsail being too much of a bother to deal with.

Hood had the idea that a mainsail could be furled up inside the mast cavity and he was right. The Stoway mast was developed and with the push of a button mainsails could be reefed or stowed effortlessly. The problem, however, was that the sail had to be batten-less meaning no roach and most sailors know that it’s the back end of the mainsail working in conjunction with the keel that provides lift when sailing to windward. No roach, no lift, and not much performance from one of the most important sails in the inventory.

More recently there has been a surge in in-boom furling and with advances in sail engineering the size of the booms have been greatly reduced. Early booms had to be huge to accommodate the bulk of a mainsail, but no longer. Precise engineering and high tech fibers mean a strong and low stretch sail that takes up about half the bulk of an older cross cut sail. And the great thing about in-boom furling is that you can have a moderate roach on the sail meaning that you get to keep your upwind performance; but, before we get too excited about things remember that both in-mast and in-boom furling can be subject to gear failure. There is a certain skill needed to operate both systems, especially in-boom, and occasionally operator error ends up with the sail jammed half in and half out. Not the preferred outcome.

The key to in-boom furling lies in the design of the sail and a very important piece of equipment; the boom vang. These days we have a myriad choices when it comes to vangs from hydraulic vangs to the more old fashioned (but extremely reliable) screw-type vangs that allow you to change the tension on the mainsail by winding a wheel. True it’s cumbersome and in these days of push button sailing perhaps a little old fashioned, but this kind of vang works very well with an in-boom furling system.

Sail design and engineering are also critical. A lot of attention has to be paid to the layout of panels to make sure that the sail rolls up evenly. For example, extra plies or layers need to be added to the leech to build up bulk at the outboard end. This bulk compensates for the bulk caused by the bolt rope rolling up on itself at the inboard end. One big advances for in-boom mainsails has been making them as membrane sails where the batten pockets are internal within the layers of film and fibers. This way there are no external pockets to hang up on the boom slot when the sail is being set or doused. 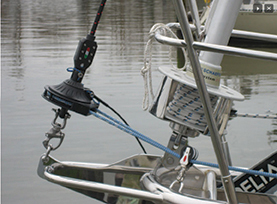 HEADSAIL SYSTEMS
Then there are headsail handling systems and they alone have allowed sailors to keep sailing beyond the point where they would normally be too old to haul down a headsail on a heaving foredeck. With four decades of refinement, the basic furler is almost foolproof and certainly makes sailing a lot easier and a lot more enjoyable.

As a device to make sail handling easier it’s been a success, but as a reefing system there is much left to be desired. Sailmakers have come up with devices like a foam luff which bulks up around the foil to remove shape from the sail when the sail is reefed, but on most sails over 110% there is just too much shape in the sail for it to be effective when reefed, at least going upwind. On a reach, it’s a different matter because you want a little shape in the sail.

One of the biggest leaps forward in sail handling has been the advent of anti-torque lines. These cleverly engineered lines are soft and easily stowed when they are not under any tension, but when pulled tight they are rock solid and can be used to furl a headsail. Usually, they are attached to a line-drive furler meaning that the furling drum can be low profile and aerodynamic. The best part is that the units can be added to most boats quite easily allowing sailors to change between a sail on the headstay and one a few feet aft on its own anti-torque stay.

The anti-torque stay has also found its way into downwind sails with the advent of line-drive furling for a Code 0 or flat asymmetrical spinnakers, as well as top down furling for other asymmetricals. A Code 0 is a very useful sail for light upwind sailing as well as power reaching and it can be easily deployed and furled because of the anti-torque line sewn into the luff of the sail. 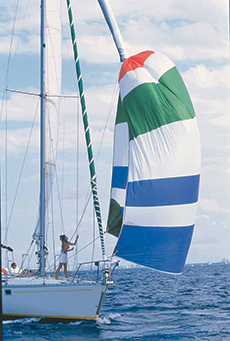 I think these new line drive furling devices and anti-torque lines are a huge boon for sail handling, but I also want to give a shout out to the humble spinnaker sock. A good sock made with a solid “potty” at the bottom and a separate pocket for the control lines is a very simple way to set and douse a spinnaker. A little technique, like using the lee of the main to hoist and douse, and running the control lines through a ratchet attached to the rail, gets you a very effective and relatively inexpensive means for spinnaker handling. 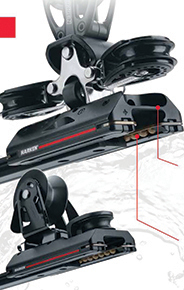 MOVABLE CARS
Another big leap forward in sail handling has been the advent of ball bearing cars or at least cars that can be moved even when under full load. A good example of this is the ability to raise and lower a mainsail traveler even when there is a lot of load on the system.

Using a series of blocks and tackle most travelers can be easily adjusted and this is great not only for sail trim but also for general boat handling. When you get hit by a sudden puff you need to depower the mainsail quickly and the best way to do so is to ease the traveler down. This very rapidly depowers the mainsail and stops the boat from heeling excessively. You can also accomplish this by easing the mainsheet but that twists off the top of the sail and slows the boat down. Also, it’s a grind, pun intended, to wind the sail back in again. With a traveler, you can quickly pull the mainsheet back to centerline once the puff has passed.

Speaking of sail trim. Another excellent piece of kit for a boat is the ability to adjust the genoa lead even when the car is fully loaded. In the past, you were pretty much stuck with a lead position unless you barber hauled the sail onto a lazy sheet and manually moved the lead position. We all know that the wind speed fluctuates and if you want to keep good genoa trim you need to be able to adjust the location of the lead. As the wind increases you may want to flatten the foot of the sail and twist open the leech. With the ability to move the lead position under full load you are able to make an infinite number of small adjustments to keep your sails trimmed properly and the boat moving efficiently.

Most lead adjustment systems consist of a ball bearing car or similar, a low friction track, and a series of blocks and tackle. Lines are run through a block, or a series of blocks depending on the size of the boat, which is located at the front of the track. The line is usually led aft to a winch to make it easier to adjust the lead position. As the breeze dies you may want to power up the sail by dragging the lead position forward or if you bear off onto a close reach you will definitely need to move the lead position forward in order keep the sail properly trimmed. It’s an effortless way to keep your boat sailing at its optimal performance.

Many of these new developments came from the solo sailing side of the sport where very experienced sailors worked closely with hardware manufacturers to devise systems that would make it easier for them to manage their boats while alone at sea. The ‘trickle-down’ from them to us ordinary sailors has been very beneficial and overall made sailing easier and a lot more fun.

Brian Hancock is a veteran round-the-world sailor and sailmaker. He lives in Marblehead, MA.